This year, Fairbanks was one of the 16 University of Arizona graduate students to be named an ARCS scholar. With scholars coming from the colleges of science, engineering, optical sciences and medicine, he is the only one from the College of Engineering.

Each ARCS scholar will receive a $7,000 scholarship annually for up to three years, though they must reapply every year. The graduate college awarded Fairbanks $2,000 in addition to the ARCS scholarship.

"I couldn’t believe it," Fairbanks said of his surprise when he finally received the award. 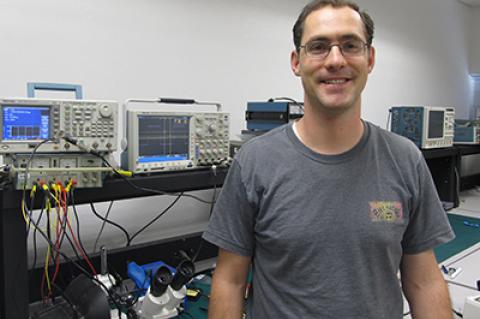 Jerrie Fairbanks, a UA electrical and computer engineeering grad student who recently received an ARCS scholarship, says it is hard not to get excited about fluorescence spectroscopy with Professor Linda Powers for a mentor. (Photo by Kayla Samoy.)

Fairbanks is doing research in fluorescence spectroscopy, which uses light to obtain data from various substances. When the correct color spectrum of light is shined on a fluorophore, a molecule that fluoresces, the fluorophore absorbs some of the light then emits light of a different spectrum.

Many fluorescent properties can be measured from a single fluorophore, so fluorescence data can be used in a number of applications. In mining, fluorescence is used to identify minerals within various compounds. In biology, it is used to sort cells of different types by binding various fluorophores to the cells.

Linda Powers, Thomas R. Brown Distinguished Chair in Bioengineering and electrical and computer engineering professor, is Fairbanks’ thesis advisor and inspired him to work in the area.

"She has an energy when she talks about these things and all the different things you can do with them," Fairbanks said.

One project is a blood analyzer to be used by U.S. armed forces for emergency transfusions. Blood usually is tested before a transfusion to determine if it is infected, but troops wounded in action often don’t have the luxury of that safeguard.

Disease detection typically looks at antibodies. Antibodies are molecules with specific characteristics produced in response to infections, and they can stay in the bloodstream for many years after infection. The blood analyzer will identify the disease itself as opposed to antibodies, providing a more precise diagnosis and potentially increasing the number of blood donors in the field.

Fairbanks also is researching an experimental fluorescence spectroscopy instrument for in vivo experiments that obtain real-time data from cells and tissue samples.

Instruments used now pulse samples with light hundreds of thousands of times to collect all of the information needed. Fairbanks’ instrument will be designed to work from only a few pulses of light. It will be designed to interrogate the naturally occurring fluorophores in a sample, thus reducing the number of dyes introduced.

Fairbanks is particularly interested in collecting time-resolved data -- observing how the fluorescence intensity decays over time when the light pulse has ended. This is challenging because naturally occurring biological fluorophores only fluoresce for a few billionths of a second after the light pulse. Recent advances in electronics, however, permit the capture of hundreds of data points in only a few nanoseconds, paving the way for Fairbanks’ research.

Despite the difficulty and magnitude of the work, the results are worth it, said Fairbanks, whose interest in engineering evolved over many years. The more he learned about electrical engineering, the more he wanted to get involved.

"I’m an engineer at heart; I like to build stuff," said Fairbanks. "Once you’ve got a working system then there’s a large sense of accomplishment, especially if it’s a system that’s going to be valuable in saving lives and disease detection."