Paul Blowers of the UA department of chemical and environmental engineering has been named one of two 2012 University Distinguished Professors.

The award will be presented to Blowers by the Arizona Board of Regents in a special ceremony in December. This makes it four in row for the UA College of Engineering.

"Amazing" is how Blowers described receiving UA's highest teaching honor in recognition of doing something he loves.

"To be surrounded by colleagues who engage so many of our students in undergraduate research, to work with peers who challenge and support students in the classroom, and to have the support from the administration," Blowers said. "All lead to me enjoying my work every day." 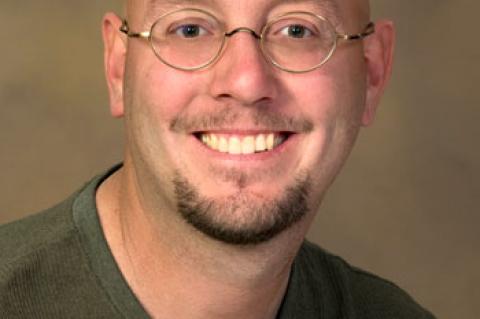 Since his undergraduate days, Blowers said a holistic approach to forging a successful academic career that balanced teaching, research, and outside interests has always been important to him. "The balance was critical to me," Blowers said. "And I've had it here," he said, talking about UA.

Early in his career Blowers chose UA over other offers because he recognized that faculty in his current department were good at research, he said, "but also cared deeply about teaching as well, while still having outside lives."

"I want to congratulate Dr. Paul Blowers on being named University Distinguished Professor," said Jeff Goldberg, dean of UA College of Engineering. "Paul is a master teacher and all around good guy, and our students are lucky to have him as an advisor, mentor and teacher."

"When you have the best students," Goldberg added, "it is important that we also have great instructors."

In 2011 the Carnegie Foundation for the Advancement of Teaching and the Council for Advancement and Support of Education named Blowers the Arizona Professor of the Year. He was selected from nearly 300 top professorial nominees from throughout the country.

Also in 2011, Blowers was named an inaugural Arizona Engineering Education Fellow. The objective of creating this new fellows program was to develop a faculty team that can improve the undergraduate experience, said Goldberg. "One way to do that is to recognize the best instructors."

In 2010 Blowers received the Five-Star Faculty Award, an honor given by students. He also received one of two Leicester and Kathryn Sherrill Creative Teaching Awards from the UA Foundation, in addition to being selected as an Honors Professor. For his excellence in teaching and research combined with service, he was named the 2010 da Vinci fellow by the UA College of Engineering's giving society, the da Vinci Circle.

Blowers recalls a student once asked him how he stayed motivated when things got tough. "I can't believe I get paid to do this!" replied Blowers, almost without thinking. "I think that sums up my passion for working with students and helping them overcome challenges as both an advisor and instructor," he said.