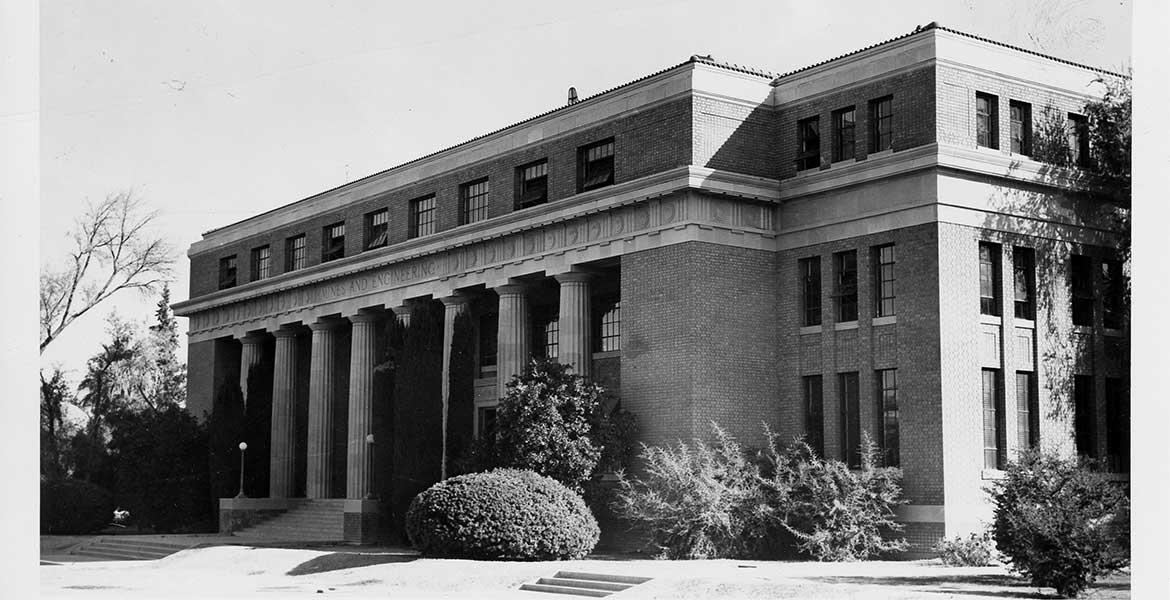 The Engineering Building in 1956. (Courtesy of University of Arizona Libraries, Special Collections)

By
Emily Dieckman
Time to read
3 minutes
Print
a- a+
Read so far
Alumni reminisce about the colorful history of one of the UA’s oldest buildings.

Today, the courtyard and steps of the building known affectionately as “Old Engineering” are where students do last-minute studying, chat about their Design Day projects, and prepare for events like the Solar Oven Throw Down. Over the last 101 years, the University of Arizona landmark has also been the site of rowdy St. Patrick’s Day rituals, wild animal invasions and the beginnings of lifelong love stories.

Old Engineering has been with the college through 14 deans, including its newest leader David Hahn, the growth from five majors to 15, and even the addition of air conditioning. It is home to the departments of biomedical engineering and systems and industrial engineering as well as the Academic Affairs Office. The building was added to the National Register of Historic Places in 1986 for its contribution to the cultural heritage of Arizona and its educational and architectural significance.

Ray Oglethorpe, a member of the college’s 2019 Hall of Fame class, remembers sitting in engineering classes and looking out the window across the way at the university’s business administration building.

“We called it the walk of shame,” he said, laughing. “Whenever people flunked out of engineering, you could see them walk across to the business and administration building.”

St. Patrick Was an Engineer ...

“... He was, he was. Fore he invented the calculus, and handed it down for us to cuss.”

So goes one line of a song ingrained in the history of Old Engineering.

St. Patrick is not just the patron saint of Ireland. Credited with teaching the Irish to build arches of lime mortar instead of dry masonry, he’s also the patron saint of engineers. Thus, St. Patrick’s Day was quite the affair in the early days of the 133-year-old college. For years, a College of Engineering student dressed as the saint himself led a rollicking parade of shamrock-adorned floats, cars and motorcycles through the center of town.

Old Engineering itself is home to the Blarney Stone, a large green stone mounted in concrete and named after a block embedded in a castle in Ireland. Legend has it that touching lips to the original stone monument endows the kisser with the gift of flattery, or smooth talking.

Students in the American Association of Engineers, which later became the National Society of Professional Engineers, first placed the green stone on a pedestal in front of Old Engineering and gave it its name in 1925, according to "Rah for the Engineers! A Century of Change." The 1986 book by former adjunct professor James P. McCormick details the first 100 years of the college.

Students in the early years circulated all manner of tall tales and rumors about how the stone, which is now a central point in the Old Engineering courtyard, came to be. In the 1940s, there was one tall tale that the Blarney Stone was the petrified eye of a giant cyclops.

A Site for New Beginnings

Gene Tobey -- who earned UA bachelor’s and master’s degrees in electrical engineering in 1959 and 1961, remembers how Blarney Stone was once the place where students were welcomed into the college.

“The freshmen being initiated would have to lean over the wall and kiss the stone,” said Tobey, also a member of the college’s 2019 Hall of Fame class. “You’d wear a green beanie, and you had to learn to sing this engineering song about St. Patrick and how he was an engineer.”

Tobey said the initiation was worth it, not only because he went on to a successful career in the aerospace and data industries, but because he met some of the most important people in his life in Old Engineering. In fact, he was working part-time in the numerical analysis lab at the rear of the building when a young woman walked in looking for a job.

The woman was chemical engineering student Marylyn Schumann. She got the computer programmer position and later became the first woman to graduate with a four-year UA chemical engineering degree. She also became Tobey’s wife. The pair have been married for 58 years and have two children and several grandchildren.

A Home for Everyone

Alumnus and professor Larry Head, who just finished his term as interim dean of the College of Engineering, came to the university as an undergraduate in 1979 and joined the faculty after he finished his PhD in 1989. His home department, systems and industrial engineering, moved into Old Engineering in 1984 while he was still in graduate school, and Head spent that summer relocating partitions from the Civil Engineering Building to the new space.

A few decades later, some uninvited guests moved in, too.

On the Tuesday before Thanksgiving break in 2012, one of Head’s doctoral students told him he’d been working late the night before when a raccoon had terrified him by dropping out of the ceiling.

“He was a major in the Korean army -- a battalion commander,” Head said. “It’s kind of hard to scare this guy, in my opinion.”

Building administrator Mia Schnaible knew there had been squirrels in Old Engineering before, so she called in the incident as a squirrel invasion. Meanwhile, Head returned to the building several times a day over Thanksgiving break to make sure his lab equipment wasn’t being damaged by critters. No damage, but he did find some evidence in the form of a trail of paw prints through his office. And a local animal capture team did indeed find a ring-tailed cat, a member of the raccoon family known for climbing trees, cacti and the walls of Old Engineering.