New Life for Tailings Means Safer Conditions for Mine Workers

By
Jill Goetz
Time to read
2 minutes
Print
a- a+
Read so far
UA mining and materials science engineers are finding ways to convert mine tailings into mine insulation for cooling hot metal mines deep underground.

Every day miners from Arizona to South Africa delve deeper and deeper into the Earth, where mine temperatures can exceed 175 degrees Fahrenheit, in search of valuable metals.

With a five-year, $1.3 million interdisciplinary research project funded by the National Institute for Occupational Safety and Health, or NIOSH, researchers in the UA College of Engineering and Mel and Enid Zuckerman College of Public Health are forging new technologies to more efficiently reduce temperatures in these mines, better protect workers from exposure to extreme temperatures and potentially save mining companies around the globe millions of dollars in energy costs.

“This project will provide solutions that are both economical and environmentally sustainable,” said Moe Momayez, the project’s principal investigator and associate professor and associate head of UA mining and geological engineering.

In one of the project’s efforts, the engineers are working to transform mine tailings, finely ground leftovers of ore extraction that are stored above ground at mine sites, into insulation to cool the air deep below.

“We are recycling a ubiquitous mine waste byproduct and turning it into something useful,” Momayez said.

Momayez and co-investigator Krishna Muralidharan, assistant professor of materials science and engineering, are developing a new form of shotcrete to reduce heat transfer from the extremely hard, highly heat-conductive rock in underground metal mines. Shotcrete, a form of liquid concrete sprayed at high velocity to insulate and strengthen surfaces, is used in many industries. But this is the first time shotcrete has been created from mine tailings to use for heat management in underground mines.

Mine operators will be able to convert the tailings into shotcrete in their mills and apply it underground, without ever having to store it. Stored mine tailings can release byproducts into the environment through dust emissions or leakage into groundwater. Converting the tailings into a useful product on site will eliminate risks associated with storing the materials, and the new shotcrete is safe for workers underground, Momayez said.

While Momayez examines geothermal heat transfer and air flow in hot underground metal mines, Muralidharan analyzes mine rock and tailings at a more fundamental level. The team conducts much of its research at Resolution Mine, a copper mine near Superior, Arizona, where workers descend up to 7,000 feet below Earth’s surface and are often exposed to temperatures of 135 degrees Fahrenheit and higher.

“This is basic science, with potentially widespread practical applications,” said Muralidharan, adding that the new shotcrete could even be used above ground to insulate houses and other structures. “We are building models to understand the atomic structure of the material and how we can alter it to create something that is porous and has low thermal conductivity, yet still strong enough to use as an integral part of a ground support system and to withstand disruptions like drilling and blasting.”

Researchers in the College of Public Health, led by co-principal investigator Eric Lutz, director of the UA Mine Safety and Health Programs, are focusing on the human factor.

“Human reaction to heat exposure is very complex,” said assistant professor Lutz. “From high school athletes who experience heat stroke to factory workers who suffer heart attacks, we don’t have a very good measure of heat’s effects on the human body and individuals’ thresholds for withstanding heat -- particularly in the workplace.”

The researchers are monitoring miners’ body temperature, blood pressure and other health indicators under various work conditions at the Resolution Mine to determine how individuals react to heat exposure and are developing additional technologies, such as more effective cooling vests, to better protect miners in the high temperatures.

The NIOSH grant supports up to seven master’s and doctoral engineering students. At least one undergraduate is also participating.

Mara Erhardt, a mining engineering junior in the UA Honors College, is reading up on geothermal heat conduction, shotcrete and the modeling software she’ll be using in the study. Later this semester, she’ll begin working on large-scale modeling and synthesis of the new insulation material.

“As an undergraduate, I haven’t had much exposure to computer programming and modeling. This is a wonderful opportunity that will open new doors for me after I graduate,” she said, adding, “It’s particularly rewarding to be part of a project with such immediate applications in places like the Resolution Mine.” 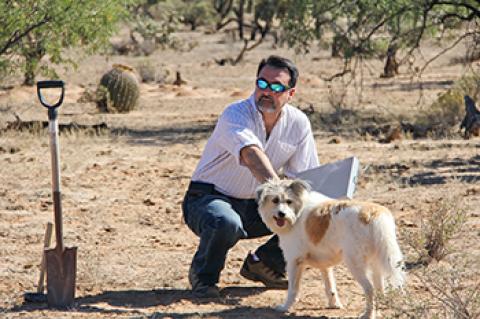