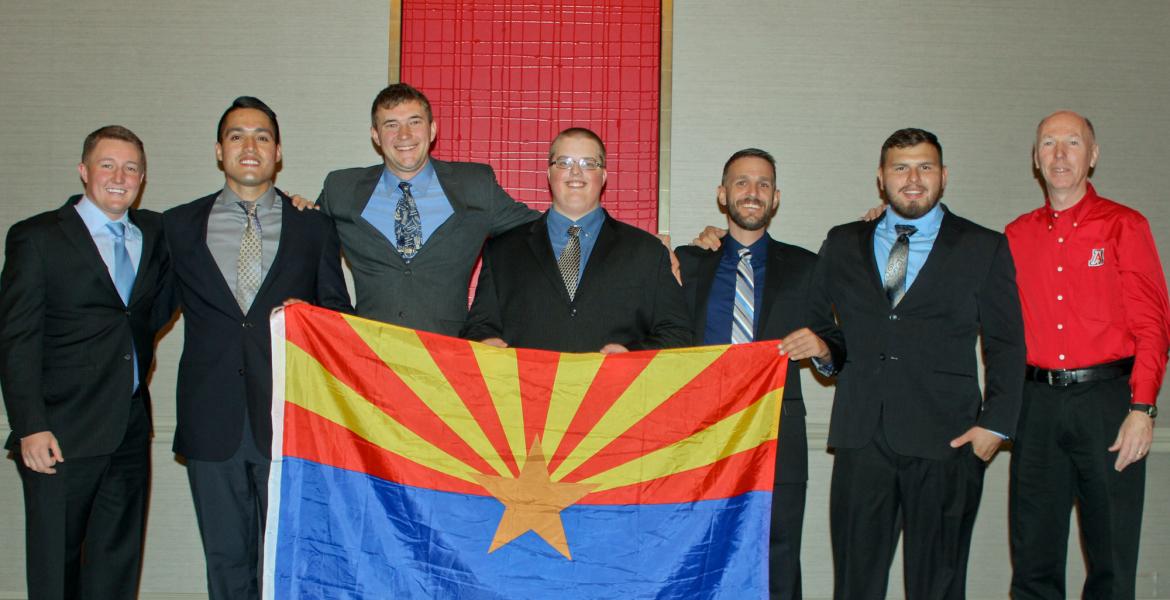 A University of Arizona student team took second place at the Society for Mining, Metallurgy, and Exploration/National Sand, Stone and Gravel Association, or SME/NSSGA, student design competition in February.

Eighteen teams from all over the world entered Phase 1 of the competition in November. Six finalist teams moved on to Phase 2 at the national SME Annual Conference and Expo in Minneapolis, where the University of Kentucky took first place.

“The team did an excellent job with the design, as well as the presentation,” said Brad Ross, the team’s mentor and co-director of the Lowell Institute for Mineral Resources. “As the first UA team to compete in the final phase of the competition, they have built a base for future teams to successfully compete in the years to come.”

Miguel Pugmire, Garrett Anderson and Christopher Deuel were part of the UA competition team as juniors during the 2016-2017 academic year.

“I enjoyed being put into, essentially, a real-world problem,” Deuel said. “One of the things about any industry is you’re not always going to have help. You’re going to have to rely on what knowledge you have, what experience you have and your ability to research to produce a plan.”

The 2016-2017 team wasn’t selected to move onto Phase 2, but one of the competition judges actually apologized to the team members, telling them he felt they should have been. They still attended the Minneapolis conference as SME members, and used the opportunity to watch the finalists give their presentations and to ask competition judges what they could do to improve.

“We started preparing for this year’s competition the day we got into Minneapolis last year, talking to the judges and figuring out what we could do better,” Deuel said.

To ensure success for this year, Pugmire, Anderson and Deuel -- now seniors -- crafted their team carefully, recruiting other mining and geological engineering seniors with a range of specialties, such as Jorge Loya Lopez, who focused on the project’s environmental element; Sean Klasen, who had more experience in aggregate mining than the other team members; and Nathan Kraft, who works as the student mine manager at San Xavier Underground Mining Lab. They also created both a senior team, which would use the competition as its senior design project, and a junior team, whose members could also enter the competition and gain experience and knowledge for their senior year.

Hexagon Mining provided the teams with funding and some mine design software, as well as a week of training on how to use it. The Arizona Rock Product Association covered the travel expenses for both the junior and senior teams. Local construction company Granite Construction gave the students a tour of a quarry mine. The UA SME student chapter, to which all team members belong, also provided some of the funding.

“These students were highly motivated, professional and inspiring, quite frankly,” said Steve Trussell, executive director of the Arizona Rock Products Association and board member of the Lowell Institute for Mineral Resources. “It’s so nice to have something positive in these students bringing back some accolades for a job well done -- and in a national competition, no less.”

During Phase 1, each team member could spend no more than 35 hours over a 21-day period in November developing a mine plan. They weren’t allowed any outside help -- not even from their professors, let alone industry professionals. After being selected for Phase 2, they couldn’t do any further work on their project until the February conference.

Once in Minneapolis, the team was given additional constraints, such as a specific amount of material that needed to be shipped out of their mine annually and some capital expenditure that should be used to improve the mine’s operations.

“We got the constraints on Friday at Minneapolis around 12:45 p.m. and we had to have everything complete at 7 a.m. on Sunday morning,” Deuel said. “We slept about six hours over those two days.”

The two nights full of energy drinks, coffee and refreshing their memories on how to work the software they hadn’t used for a few months paid off when they took silver at the competition.

“The students were exceptional in their ability to network and communicate with industry professionals,” said Brian Groff, principal of Groff Engineering & Consulting in Kentucky and one of the competition judges. “I was impressed that UA students were not hesitant or intimidated to come up to me or other professionals and ask questions pertaining to how to be successful in their careers.”

No one enjoyed the lack of sleep they experienced in both phases, but they all agreed the project was hugely valuable. Loya Lopez said the team’s camaraderie was one of the best parts of the competition.

“To me, it’s not really a team. It’s more of a family,” agreed Kraft. “You’re crammed in a room for two days. ‘Teamwork’ just doesn’t fully describe how things happen.”

The competition team was a part of a larger cohort of 48 UA SME student chapter students who attended the conference.

“It was by far the largest student chapter presence,” Deuel said. “And I think the second largest was 19. We definitely represented in Minneapolis.”