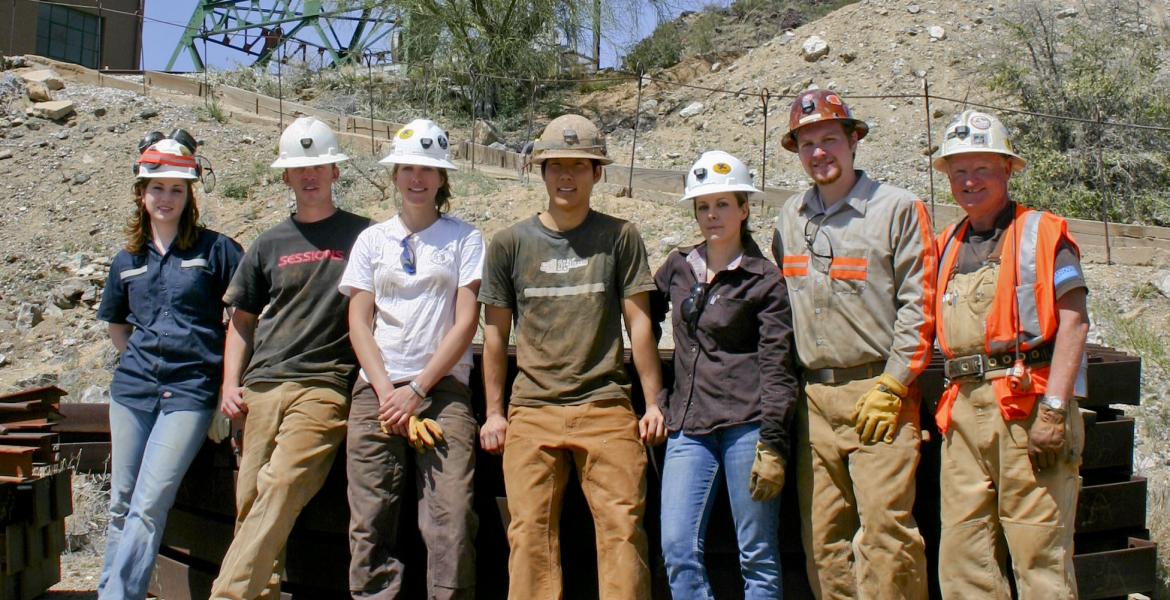 Mining Engineering Students Compete Down Under in International Mining Competition

By
Pete Brown
Time to read
3 minutes
Print
a- a+
Read so far
Competition keeps traditional mining techniques alive, promotes worker safety, and honors all miners who have died on this very dangerous job. 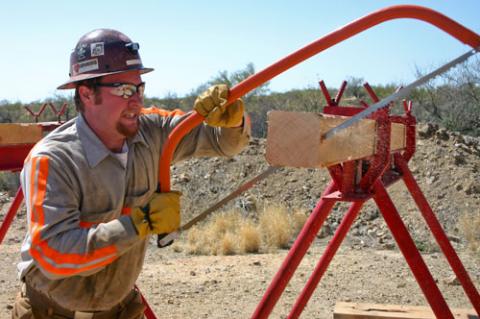 Robert Tracy practices the timber-sawing event ready for competition in the 2010 International Mining Games. All the events are timed, and the quickest wins.

More than 40 teams from mining schools in the U.S., U.K. and Australia took part in the games, which were held in April and featured old-fashioned mining techniques such as hand mucking and timber sawing.

The Wallabies and the Wombats, teams from the Western Australian School of Mines, dominated the event, but UA offered stout competition, placing fifth in the co-ed team class and 14th overall.

The games aim to keep old-school mining techniques alive while forging bonds between mining students around the world. The first games took place in 1979 at the University of Idaho. UA won the 1979 games, and hosted the games in 2007.

The games were staged concurrently with the 2010 New Leaders' Conference organized by the Australasian Institute of Mining and Metallurgy, which represents the interests of professionals in all facets of the mining, exploration and minerals processing industries. 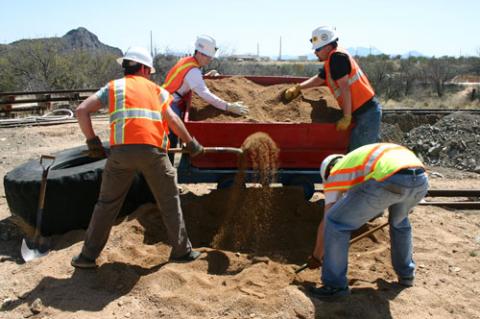 The team manually shovels excavated rock into a rail truck, aka hand mucking.

Although it all sounds like a lot of fun, the competition itself has a very serious point: mine safety. The International Collegiate Mining Competition was established in remembrance of miners who died in the Sunshine mine disaster, and to honor all miners who have died on this very dangerous job.

On May 2, 1972 fire broke out in the Sunshine mine, near Kellogg, Idaho. While 178 miners worked silver veins in the subterranean gloom, carbon monoxide and smoke rapidly permeated the shafts and tunnels. Although 85 miners managed to escape, and two more were rescued a week later, it was only on May 13 that the last of the 91 dead were brought to the surface.

It was the country's worst hard rock mining disaster since 168 men died in the Spectator mine fire of 1917 in Butte, Mont. Every year on May 2, people gather at the Sunshine Miners Memorial Statue near Kellogg to pay tribute to fallen miners.

The UA team put in weeks of practice for the competition at the San Xavier Underground Mining Laboratory about 23 miles south of Tucson, Ariz. The UA department of mining and geological engineering has operated the mining lab since 1958.

UA's Long History of Mine Safety

There is a direct link between the Sunshine mine tragedy and the San Xavier mine's international reputation for mine safety: mine director Ros Hill, who in 2009 received the H.L. Boling Above and Beyond Safety Award from the International Society of Mine Safety Professionals.

In May 1972, Hill was working in the Lucky Friday mine in the Coeur d'Alene mining district in Idaho when he was called to the nearby Sunshine mine. When the smoke had cleared and the death toll was confirmed, Hill made up his mind then that he would focus his career on miner health and safety.

"The award is meaningful for me because it is a recognition by our peers that we are running a first-class health and safety program," said Hill.

Hill pointed out that, for the first time in the mine's history, half of the mine management team are women engineers.

The mining lab's health and safety foreman, mining engineering junior Dana Specht, noted that mine safety issues have become firmly embedded in mine operations at San Xavier. "If you don't care about safety, that's when you're going to have a serious accident," she said. "We aren't doing major projects out here, but there's still a lot of things that can go wrong. So this semester we implemented our new safety program."

Part of that program includes MSHA training. MSHA stands for Mine Safety and Health Administration. "We're making everyone know that safety's the first priority," Specht said. "We start every shift with a safety share. Everyone's aware of it now."

Specht is acutely aware that lax safety procedures cost lives in her industry. "We don't have that many accidents, but when things go wrong, usually more than one person's life is at stake," she said.

Mining engineering senior and mine manager Rita Riggs agrees. "We're so blessed to have Ros Hill out here with us because the mentality about safety is completely different," she said. "It's not an afterthought."

Riggs realizes that her classmates here at UA and fellow mining engineering students she met in Australia will probably form a core of professional colleagues she will know for years. "You get a kind of family atmosphere," she said. "You're not just lost in a sea of other professionals."

The anguish of a mining disaster is felt most sharply by miners' families and in miners' hometowns, but the international mining engineering community is not large. "Mining is a very small industry, and if anything happens to anybody, the odds are you know that person," Riggs said. "That just makes it that much more personal."

The seven events in the International Mining Games are jackleg drilling, gold panning, hand mucking, hand steeling, timber sawing, surveying, and trackstand.­­­­ The unofficial eighth event is the beer chug. UA has a certain reputation in this particular area, but that's another story.