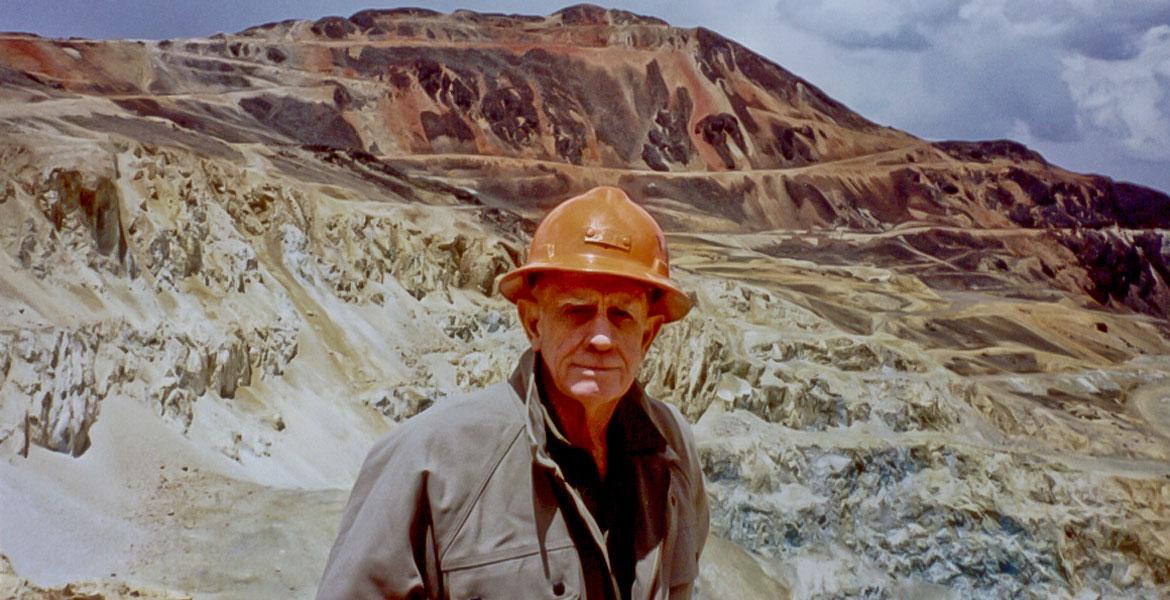 Dave Lowell at the Toromocho mine in Peru.
Home / Stories / Mining Engineering Alum and UA Benefactor Honored by Australian Academy of Science

Dave Lowell received his award from professor Kurt Lambeck, president of the Australian Academy of Science, at a gala presentation dinner Feb. 19 in the academy’s Shine Dome in Canberra, Australia.

After receiving the award, Lowell spoke about his working life to colleagues, Haddon King’s family, and the many representatives from the mining, geoscientific and university communities from around Australia who were present at the dinner.

Jenefer Fletcher, the Australian Academy of Science’s awards officer, described the event as “a great night and a fitting tribute to a nice man!”

Lowell received a bachelor’s degree in mining engineering from UA in 1949 and a master’s degree in geology from Stanford University in 1957. He got his professional engineer degree from UA in 1959, and honorary degrees from Universidad Nacional de San Marcos in Peru in 1998 and UA in 2000.

The Lowell Institute for Mineral Resources is a collaboration between Science Foundation Arizona, the mining industry and Arizona’s universities, led by UA, to found a global center of mining excellence. It was founded in late 2008 and owes its creation to Lowell’s generous endowments.

In 2001 Lowell and his wife Edith established two endowments to benefit the department of geosciences in the College of Science, the J. David Lowell Graduate Scholarship in Geosciences and the J. David Lowell Chair in Economic Geology. The economic geology chair has already enabled the establishment of an innovative master’s degree program to serve exploration, development and mining geologists from around the world.

Lowell has achieved worldwide fame as an exploration geologist and lecturer. His specialty is porphyry copper deposits and his groundbreaking research and study with John Guilbert in 1967 set the scene for his future discoveries and became a benchmark for the global exploration industry in the search and discovery of new ore deposits.

He has an outstanding record spread over nearly 50 years of many discoveries of important copper and gold deposits, including the world’s largest copper producer, La Escondida mine in Peru. He has lectured around the globe about his discoveries, scientific methods and his approach to exploration, and has mentored and trained several generations of exploration scientists. He is currently CEO and president of CIC Resources conducting exploration in South America.

Lowell began his career as a mining engineer and shift boss with Asarco in Mexico, followed by a job as an exploration geologist with the Atomic Energy Commission on the Colorado Plateau. After spending time at Stanford to fill out his geology background, he returned to uranium exploration in Utah.

Lowell became an independent consultant in 1961. Between 1961 and 1990 he worked for 110 companies in 26 countries, largely in porphyry copper exploration. In 1965 he made two discoveries in Arizona: the Kalamazoo ore body and the Vekol Halls deposit. He found the Casa Grande West deposit in 1975. Lowell discovered the La Escondida ore body in 1981, and the million-ounce San Cristobal gold mine in 1987.

In 1991, Lowell initiated a personally financed exploration program in Peru, which resulted in the discovery of the eight-million-ounce Pierina gold ore body. Since 1996 Lowell Mineral Exploration has been involved in joint venture projects with Rio Tinto, Noranda, Phelps Dodge, Cyprus, Rio Algom, Corriente Resources, and Billiton. He is managing exploration projects in Ecuador and Chile and is also chairman of Bear Creek Mining Company, an exploration corporation in Peru.

Lowell has published more than 50 articles. The most notable, co-authored with John Guilbert, defines the Lowell and Guilbert Porphyry Copper Model. This article became the standard reference for exploration geologists worldwide.

Lowell was elected to the National Academy of Engineering in 1999. He has received the Daniel C. Jackling and Robert Dreyer awards from the Society for Mining, Metallurgy & Exploration; the Earl McConnell Award from the American Institute of Mining, Metallurgical, and Petroleum Engineers; the Silver Medal and Penrose Gold Medal from the Society of Exploration Geophysicists; and the Gold Medal from the Mining and Metallurgical Society of America. Lowell was inducted into the American Mining Hall of Fame in 2002 at a ceremony held in Tucson, Ariz.

Parts of this article are excerpted from the December 2009 edition of the Australian Academy of Science Newsletter. Thanks to Jenefer Fletcher, AAS awards officer.