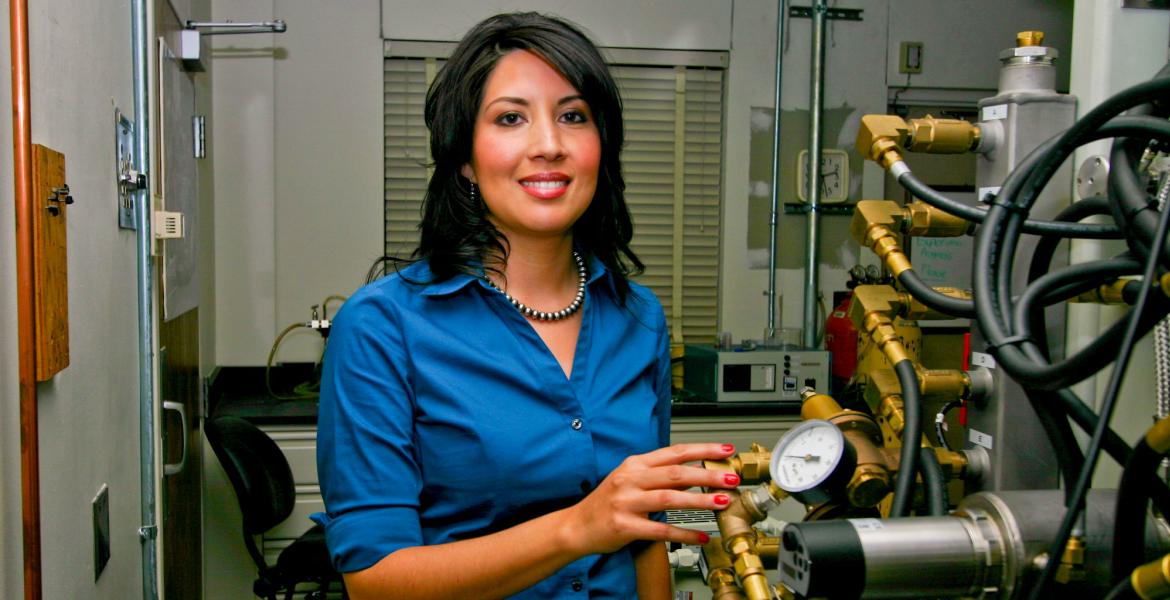 By
Pete Brown
Time to read
2 minutes
Print
a- a+
Read so far
MSE researcher will investigate materials for hypersonic vehicles.

Erica L. Corral, an assistant professor in the UA Department of Materials Science and Engineering, recently received an award under the Young Investigator Program of the Air Force Office of Scientific Research.

Competition is fierce for research grants awarded by the Air Force, and Corral's award marks the first time that UA has ever been a part of such an Air Force program for young investigators.

Corral said there is no official word on the exact amount of her award yet, but that it would be more than half a million dollars.

The Air Force Office of Scientific Research, or AFOSR, is in the process of awarding approximately $14.6 million in grants to 38 scientists and engineers who submitted winning research proposals to the program.

The AFOSR received more than 200 research proposals in response to its announcement that it would be funding major areas of interest to the Air Force, including materials science.

Young Investigator Program research grants are awarded to scientists and engineers at research institutions across the U.S. who have received doctoral or equivalent degrees in the last five years and show exceptional ability and promise for conducting basic research.

Corral's winning proposal will investigate whether ceramic coatings can be used to shield the carbon-carbon composite based hypersonic vehicles from the extremely high temperatures experienced during flight at speeds in excess of Mach 5.

Current hypersonic vehicles use ablative coatings to protect them, which means that the coatings vaporize at high temperatures. Corral said there is the potential for longer missions in more extreme environments if ultra-high-temperature ceramics, or UHTCs, are used. "However, the response of UHTCs under hypersonic flight conditions is not well understood, thus limiting some Air Force missions," Corral said.

The ceramic coatings used in these thermal protection systems include carbides and diborides of silicon, tantalum, zirconium and hafnium. Her previous research already indicates that no single coating material offers enough protection, so Corral is investigating the oxidation of multilayer and composite ceramic coatings.

"It's hard to predict how these oxides will behave under extreme hypersonic flight environments," Corral said. "The only way to truly test the oxidation resistance of the proposed UHTCs is to build a multibillion-dollar hypersonic test flight vehicle." Building such a vehicle is not feasible, so Corral will use the grant money on thermal analysis equipment and for test time on a sophisticated solar thermal test facility that can duplicate hypersonic flight heat-flux environments. This will enable her to study the oxidation kinetics and thermal shock of her coatings.

Joe Simmons, head of the department of materials science and engineering, said of Corral's award: "It is a great honor to be part of this outstanding program. It is truly exceptional to have a member of our faculty recognized at this level for her expertise in ultra-high-temperature ceramics."

Corral joined the materials science and engineering department in August 2008. She received her bachelor's degree in metallurgical and materials engineering from the University of Texas at El Paso and her doctorate in materials science from William Marsh Rice University in Houston. Before she joined UA she worked as a postdoctoral appointee in the Ceramic Processing and Inorganic Materials Department at Sandia National Laboratories in Albuquerque, N.M.

Corral's research interests are focused on understanding the fundamental thermal and mechanical properties of high-temperature materials for use in extreme and harsh environments. In particular, her expertise is in the use of novel processing methods used to create ultra-high-temperature ceramics, coatings, and ceramic matrix composites reinforced with nanofibers.