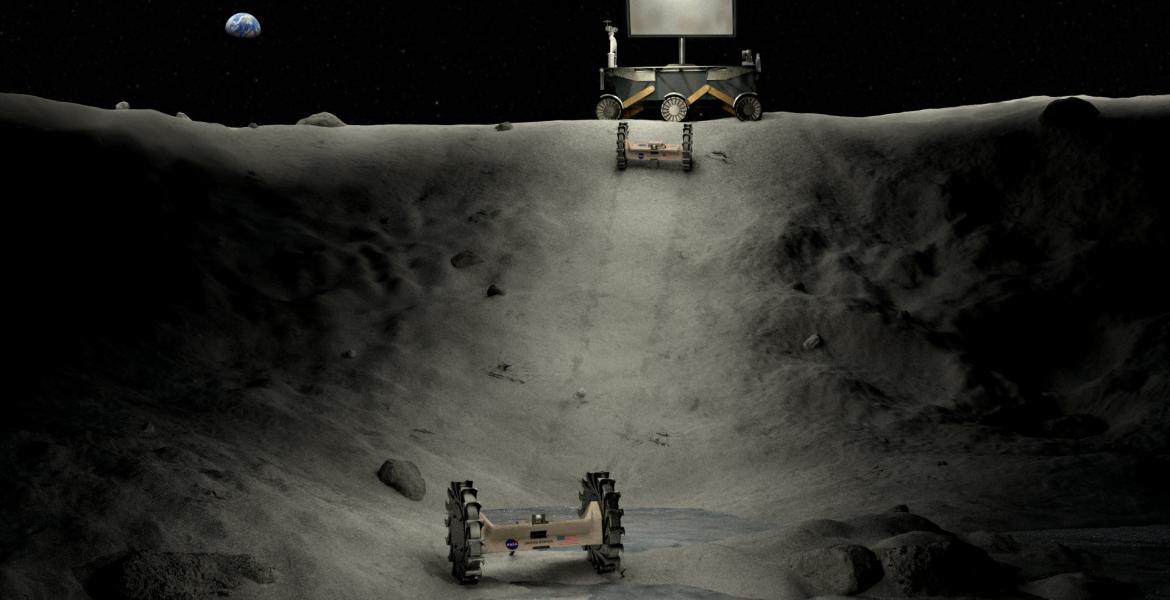 Illustration of power, lighting and roving concepts operating in a lunar crater. (Photo courtesy of NASA)

By
Rosemary Brandt and Emily Dieckman
Time to read
4 minutes
Print
a- a+
Read so far
NASA funding will support UA teams working on ways to harvest water and produce crops in space.

Many things change for astronauts when they leave Earth and head into space, but at least one remains the same: They need food and water. NASA recently awarded funding to two University of Arizona teams to search for water and grow food in space.

Led by researchers in the College of Engineering and College of Agriculture and Life Sciences, the missions focus on harvesting water from the lunar surface and improving techniques for microgravity crop production. The grants are a testament to a statement by NASA official Jim Bridenstine that the University of Arizona is a world leader in training space engineers and scientists.

There are craters in the moon's south pole that have remained dark for billions of years, but scientists have found evidence that the region may contain water. Not only critical for sustaining human life, water can be used on robotic missions as fuel, a radiation shield or a form of thermal energy storage.

As part of its Artemis Student Challenge, NASA awarded nearly $1 million to eight university teams to develop new methods to search for, and eventually extract, water from these permanently shadowed regions.

A joint team of researchers, led by the Colorado School of Mines in partnership with University of Arizona, received $114,000 for a project that combines laser power with FemtoSats – tiny, disposable satellites about the size of a stick of butter developed in the UArizona SpaceTREx Laboratory.

"Students are actually building an entire system, which is very rare to do, particularly in the field of aerospace," said Jekan Thanga, assistant professor of aerospace and mechanical engineering and head of the SpaceTREx Laboratory at the University of Arizona. "Our project is a stepping stone to building up the necessary technologies to prospect and extract water on the lunar surface."

The Colorado School of Mines is exploring the concept of using lasers to power lights and machinery used for lunar exploration. Although pairing lasers with "the dark side of the moon" might seem like a no-brainer, the researchers need a low-cost, low-risk way to test the viability of using laser signals for power and communication in a lunar environment. Enter the FemtoSats.

"The special thing about these guys (FemtoSats) is that they're so low-cost that you can send tens, hundreds, maybe even thousands for the price of one regular satellite," Thanga said. "Since the environment of the moon's south pole is so unknown to us, disposable spacecraft are a perfect way to explore these regions without risking damage to more expensive spacecraft."

In the proposed mission, a lander-mounted laser will touch down on the surface of the moon and launch the FemtoSats to different points on the lunar surface using a jack-in-the-box-like mechanism. The FemtoSats will receive the signal from the laser and transmit it back to demonstrate the validity of using the laser for communication.

"One of the most exciting things about this challenge is that several of the concepts, if proven to be viable as a result of these awards, could eventually be integrated and operated together on the surface of the moon," said Chad Rowe, acting Space Grant project manager at NASA Headquarters in Washington, D.C.

Manned space exploration has long captured the hearts and minds of people across the globe. However, one of the major hurdles for humans' sustained presence on the moon and beyond remains: a sustainable and efficient means of providing astronauts with nutritious and freshly grown fruits and vegetables.

The challenge? Zero gravity. To put it simply, water behaves differently in space.

"There's no gravity, so it's very different than watering a garden in your backyard," said Murat Kacira, director of the Controlled Environment Agriculture Center and professor in the Department of Biosystems Engineering. "Keeping a proper balance of water and nutrients at the roots and maintaining sufficient oxygen levels for crops are real issues."

Various systems for crop production on the space station have been evaluated and demonstrated with success, including the Biomass Production System, Vegetable Production System and Advanced Plant Habitat.

In the Vegetable Production System, popularly known as VEGGIE, a garden about the size of a piece of carry-on luggage typically holds about six plants. Each plant grows in a "pillow" filled with a clay substrate and fertilizer designed to help distribute water, nutrients and oxygen around the root zone.

To improve upon current designs and support its goals to further human space exploration, NASA has awarded $1.12 million to the University of Arizona and four other investigative teams. The charge: to develop an improved water and nutrient delivery system for growing crops in microgravity conditions that is compatible with the limited available space in lunar surface habitats and spacecraft.

Led by Kacira, the UArizona team brings together several researchers behind the university's Prototype Lunar/Mars Greenhouse and Bioregenerative Life Support Systems efforts, including Phil Sadler, a botanist and innovator responsible for the overall design and fabrication of the Lunar/Mars Greenhouse modules, and Roberto Furfaro, director of the College of Engineering's Space Systems Engineering Laboratory.

"Building on our history with bioregenerative life support systems, we have assembled an incredible interdisciplinary team of scientists and engineers," said Kacira. "The technology we're developing not only supports the future in space exploration but can be used to improve food production right here on Earth."

Other team members include Kitt Farrell-Poe, head of the Department of Biosystems Engineering and an expert in biological processes, water quality and water treatment systems; Minkyu Kim, a biomedical engineer specializing in artificial protein design and synthesis, polymer physics and soft materials; Barry Pryor, a professor in the School of Plant Sciences who specializes in plant health management, plant pathology and mycology; John Adams, the deputy director of Biosphere 2 and an expert in wildlife, fisheries and biology; and Neal Barto, a horticultural engineer who will support sensor development, instrumentation and system monitoring.