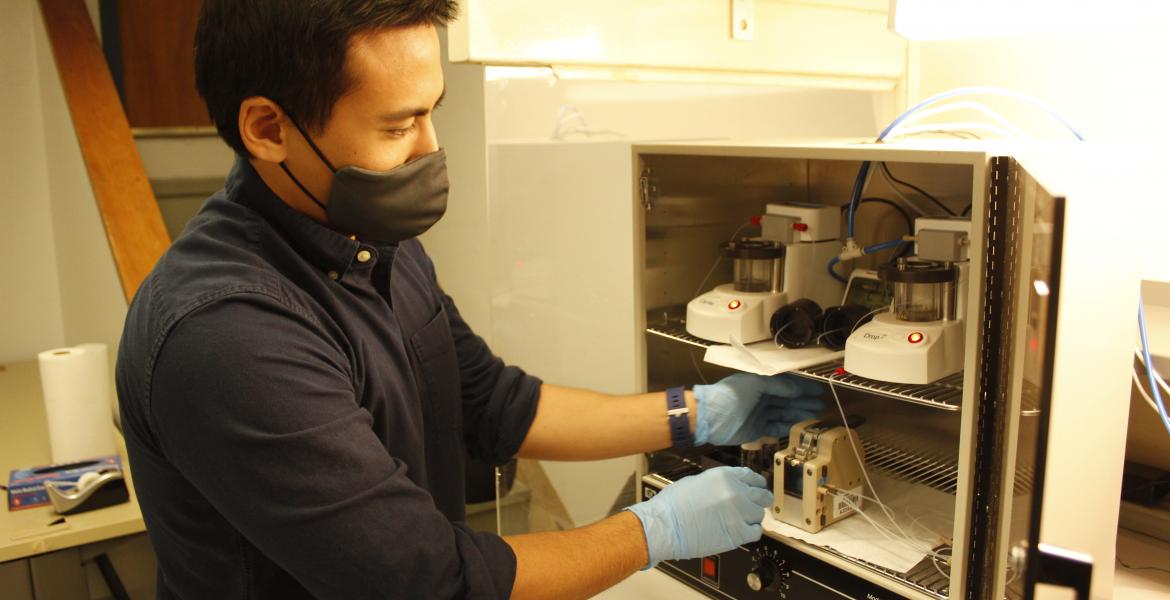 By
Emily Dieckman
Time to read
2 minutes
Print
a- a+
Read so far
Engineering assistant professor and Army Young Investigator Award winner develops a water test that uses oil droplets, rather than a solid sensor, to immediately detect contaminants.

“Lab testing requires time and dedicated equipment, and what we’re developing could be really useful for someone who wants an actionable item right away, rather than having to wait for samples to be transported back to the lab,” said Savagatrup, an assistant professor of chemical and environmental engineering. “There’s a lot of benefit to a device that could be used directly in the field.” Savagatrup’s team plans to develop an alternative, on-the-go method for detecting a wide array of contaminants.

“A biological analog for most sensors would be an antibody: They are designed to detect one specific antigen. If you want to detect something else, you need a different antibody,” he said. “Our approach is closer to creating an electronic tongue, which uses a bunch of nerve sensors to detect many different flavors.”

The key is multiple sensors working together – at first, just a few, but ultimately, potentially billions. After all, it’s not one particular taste bud that detects a specific flavor, but the combination of information received by all of the taste buds. Savagatrup also compares the method to looking at a computer screen, rather than individual pixels. A single pixel might not provide meaningful information, but the entire picture they create can.

Current portable sensors on solid devices are dipped in the liquid being tested. If the contaminant in question is present, it binds to or interacts with the sensor. However, this method is prone to various forms of instability, such as degradation of binding sites, often leading to unreliable readings. Savagatrup’s solution is liquid sensors, in the form of reconfigurable oil droplets that change color when they come in contact with contaminants.

“These oil droplets are fully submerged in water,” said Savagatrup, who joined the University of Arizona in 2019, after earning a PhD in chemical engineering from the University of California, San Diego, and completing a postdoctoral fellowship at the Massachusetts Institute of Technology. “So, the boundary between each droplet and water is its own interface and provide an independent reading. If you have multiple of these droplets, you end up with a network of connected information, like neurons in the brain, or, again, like pixels on a computer screen.”

The constellation of color-changing droplets creates a picture of which contaminants are present. Savagatrup and his team aim to establish what color combinations occur in the presence of specific chemicals -- starting with PFAS. Then, they plan to train a computer program to recognize these correlations on its own.

“We’d like to have an algorithm that can make these connections itself, without me or my students telling it that, say, a pattern of ‘red-blue-green’ indicates the presence of lead, but ‘red-blue-red-blue’ means PFAS,” Savagatrup said.

The team’s work could lead not only to another method for detecting water contaminants, but also to better ways of removing pollutants from the environment.

“This research has the potential to overcome instability challenges of current chemical sensors by focusing on the signals that can be gleaned from the liquid-liquid interface of responsive complex emulsions,” said Elizabeth King-Doonan, program manager, Army Research Office, an arm of the U.S. Army Combat Capabilities Development Command’s Army Research Laboratory. “If successful, these signals can be used to generate fingerprints for a suite of toxic or environmentally damaging chemicals, rendering highly selective, sensitive and robust chemical sensors that the Army can use for ultra-trace detection, decontamination and source partitioning.”