By
Karina Barrentine
Time to read
1 minute
Print
a- a+
Read so far
UA Professor Working on Portable Diagnostics for HIV, Hepatitis

The Thomas R. Brown Distinguished Chair in Bioengineering is developing fast, disposable blood tests for pathogens that cause diseases such as HIV and hepatitis. 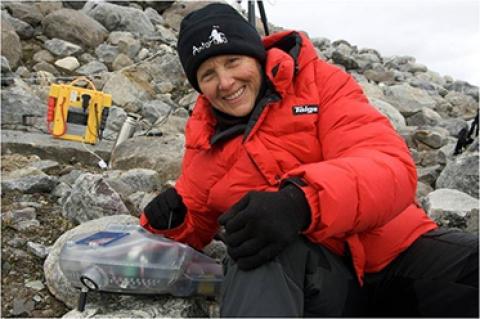 Professor Linda Powers, shown here with one of her instruments in the Arctic, is taking her portable technology to a new level: diagnostics, checking blood for disease. "What an incredible extension of a hand of friendship to small businesses in the Valley," she said.

The novel technology for rapid pathogen detection in blood relies on the capture of the pathogens with specially designed binding mechanisms and the intrinsic fluorescent signatures of the live captured   pathogens.

"This will save time, work and expense when detection of blood-borne disease organisms is needed and other facilities are not available," said Powers, who holds appointments in biomedical engineering and electrical and computer engineering at the UA.  "It quickly tells you the information you must know."

Powers’ company, MicroBioSystems of Arizona, recently was awarded two Department of Defense contracts. One contract is for developing a disposable blood test to detect any pathogens present. The other will distinguish the specific pathogens, including viruses that causes HIV and some forms of hepatitis, prions that can lead to mad cow disease, and malaria-inducing parasites.

The military has plans to use the technology in the field, for example in remote locations to test for infectious agents in blood to be used for transfusions. However, disposable blood tests for diseases such as HIV and hepatitis also could save countless lives in developing nations and even in remote areas of the United States. Now blood samples must be sent off to labs, where microbe specimens are grown and analyzed, before it can be used in medical procedures. This is a time-consuming process, especially in life-or-death scenarios.

With this new technology -- which combines molecular, electrical and optical engineering -- blood drawn or acquired with a finger stick will go directly into a small, disposable unit for analysis in real time.

Among Powers' University collaborators are Janet Wang, principal investigator and professor in the electrical and computer engineering department; Walter Ellis Jr., a research professor in biomedical engineering; and a number of dedicated and talented graduate students.

Powers had the technology to build on, but she credits College of Engineering Dean Jeff Goldberg with making the DOD subcontracts with the University a reality and enabling her team to expand on their work.

"He really made this happen," said Powers. “What an incredible extension of a hand of friendship to small businesses in the Valley. He is very supportive of entrepreneurships and farsighted enough to realize the opportunity with a new, small company in southern Arizona.”

Whether she is using a hand-held sensor to find microbial communities six feet under arctic ice, backpack-size instrumentation to identify cholera- and diarrhea-causing bacteria in Tanzanian well water, tiny equipment atop drones to discover what microbes are kept aloft in Atacama Desert volcanic plumes, or a new disposable instrument to detect blood-borne pathogens, there is no doubt that somewhere in the world Professor Linda Powers will be making a difference.