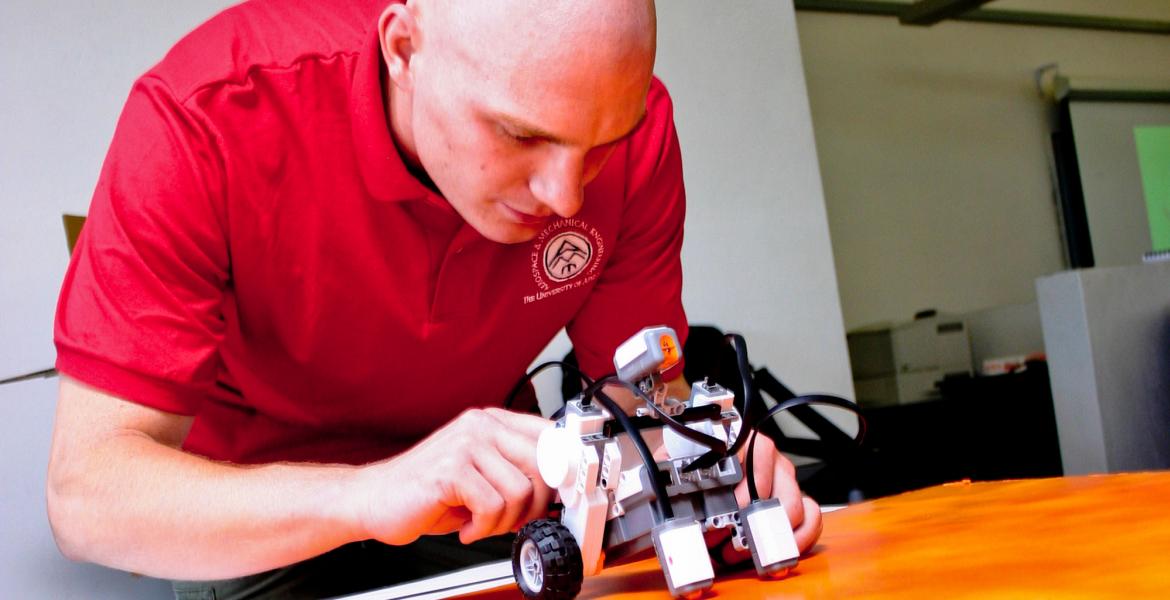 By
Pete Brown
Time to read
4 minutes
Print
a- a+
Read so far
High school teachers learn robotics so they can take valuable engineering lessons back to their classrooms.

More than 40 educators attended the Southwest’s first Lego robotics conference June 16 at the UA College of Engineering’s department of Aerospace and Mechanical Engineering.

The conference was organized, with help from Tufts University, by the Lego Robotics Outreach Club, or RoboClub, which was formed in 2008 by mechanical engineering students and their faculty advisor, professor Eniko Enikov, to promote engineering, science and math education using Lego materials as a teaching tool.

RoboClub will put engineering students and teachers together in classrooms to provide Lego-based interactive lessons that are structured like engineering design projects. The objective of the collaboration between RoboClub and teachers is to encourage children to follow careers in science and technology.

RoboClub will use Lego’s Mindstorm NXT kits and Robolab software to help develop curricula that meet State of Arizona standards for science, math and technology. To achieve this, RoboClub members have adopted the Student Teacher Outreach Mentorship Program—STOMP—developed at the Tufts Center for Engineering Educational Outreach (CEEO).

First of Its Kind in the Southwest

One of the champions of the Tufts program is Chris Rogers, professor of mechanical engineering. At Enikov’s invitation, Rogers gave a talk at UA in February 2008 and Enikov realized that the program would be a good way to attract students to UA. “I wanted to attract students interested in electronics, robotics and sensors,” said Enikov. “I asked my dynamics students if they would be interested in setting up a Lego club over the summer and immediately got six applicants.” At that point, Enikov contacted Rogers and with some help from Tufts, which has had STOMP since 2001, the Southwest’s first Lego engineering conference was born.

Kevin Staszowski from Tufts University, who presented a workshop at the conference, explained that the CEEO at Tufts created STOMP to maintain an engineering outreach program that was originally sponsored by the National Science Foundation. “The NSF funding was great, but how could the work continue after it ran out? That’s what STOMP does,” Staszowski said. “It involves sending undergraduate engineering students into classrooms to help out with Lego robotics activities. Teachers are primarily in control and get trained to use the robotics, but students are there as support.” Local STOMP initiatives will still need funding, says Staszowski, “but Lego is a really cheap way of learning through doing.”

Further support for teachers comes in the form of the user manuals, which contain instructions on how to write simple NXT software programs to operate motors and sensors. The manuals also contain learning objectives and step-by-step building and programming instructions.

Although the conference is new to the Southwest, the concept of using Lego materials to teach engineering is not. Charlotte Ackerman from Sunrise Drive School in the Catalina Foothills School District in Tucson, Ariz., described at the conference how students in grades 2 through 5 regularly use the school’s robotics lab, participate in a Lego league and gain certificates of achievement that describe them as “robotics engineers.” The children earn “mission points” for successful solutions as they use Lego materials to learn critical thinking and creative problem solving.

Sunrise Drive School’s robotics curriculum meets state standards, but Staszowski says teachers need not delay starting a Lego robotics program if they are uncertain about compliance with these standards. “The creativity of the teacher and the STOMP support system can enhance existing curricula using robotics rather than creating new curricula that have to go through a lot of steps,” he said.

Attending the conference was Tracy Rexroat, state supervisor for engineering and manufacturing with the Arizona Department of Education. She described Sunrise Drive School as “an excellent example of early learning.” According to Rexroat, the Catalina Foothills School District has a 97 percent graduation rate. “It is a top innovative school district,” she said.

More than 40 educators attended the Southwest’s first Lego robotics conference June 16, 2008, at the UA College of Engineering’s department of Aerospace and Mechanical Engineering.

Part of Rexroat’s role is to develop curricular standards that meet industry needs. “The feedback from industry is that it needs its future engineers to be college bound,” she said, “and it needs them to be able to apply engineering principles.” With regard to industry’s expectations, Rexroat described UA’s Lego robotics program as “perfect,” and added: “When students are using Lego and robots, it doesn’t matter if they’re 2nd grade or 7th grade or 12th grade—they are still going to learn problem-solving principles using robots and eventually apply them to industry.”

Aerospace is a signature industry in and around Tucson, and UA’s lead role in the Phoenix Mars Lander mission has prompted RoboClub members to issue a classroom challenge for students using Lego robotics—to build a Mars rover capable of detecting and moving toward light while avoiding hazardous terrain.

Sharing the Knowledge and Experience

RoboClub members have created blueprints for the construction and programming of the Mars rover. The blueprints are available from RoboClub’s website. One of the first of Enikov’s students to sign up for RoboClub was mechanical engineering student Thomas Brown, who has been working on a Lego robot that emulates the Phoenix Mars Lander. “Like the Phoenix, the Lego robotic arm scoops up a sample—in this case, a colored plastic ball—analyses it and transmits the results back to mission control,” said Brown. Analysis consists of using a sensor to determine whether the ball is red or blue. Transmission back to mission control occurs over a Bluetooth connection between the robot and a Lego control station that features a joystick and a display console to view the transmitted analytical results.

The applications for Lego materials as a tool to teach engineering seem to be bounded only by the limitations of users’ imaginations. A colleague of Enikov’s in the department of Aerospace and Mechanical Engineering, professor Parviz Nikravesh, has expressed an interest in using Lego systems to teach mechanism design, which is the design of gears, transmissions and linkages. “Lego could also be used to teach physics, mathematical graphing and more,” said Enikov.

Enikov is exploring future robotics applications in non-engineering disciplines—biology, for example—and plans to contact the Arizona-Sonora Desert Museum to design a Legorobot with a camera or other sensory equipment that can climb cacti or protected plant species that are easily damaged. Museum biologists could guide the robot remotely and inspect the plants for disease and parasites, and check up on plant inhabitants, such as nesting birds.