Jeong-Yeol Yoon Elected President of the Institute of Biological Engineering

By
Jill Goetz
Time to read
1 minute
Print
a- a+
Read so far
Lab-on-a-chip developer with multiple UA appointments will lead bioengineering society.

Associate professor Jeong-Yeol Yoon holds so many appointments across the UA campus that people often ask him which college he is with and where they can find him. (If they can find him, he jokes.) 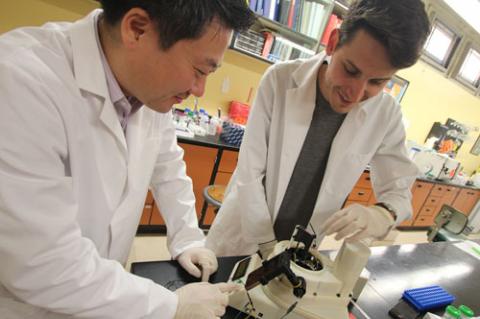 Such varied experience will serve Yoon well as the new president of the Institute of Biological Engineering, a professional organization dedicated to integrating engineering principles with the many aspects of life sciences. He is president-elect for 2014, president for 2015, and immediate past president for 2016.

Yoon earned three degrees in chemical engineering from Yonsei University in South Korea and a second PhD in biomedical engineering from the University of California, Los Angeles, where he worked on lab-on-a-chip technologies and biomaterials before joining the UA faculty in 2004. His courses include Sensors and Controls and Biomaterial-Tissue Interactions. He collaborates with several UA colleges, including Medicine, Pharmacy, and Public Health. In the College of Medicine, he and cardiology professor Dr. Marvin Slepian are testing nanotechnology techniques to improve how cardiovascular implant devices, such as stents, are attached and adhere in the human body.

“The University has strongly encouraged me in all of my teaching appointments and research activities on campus,” Yoon said. “Many universities ask you to stay in and focus on just one department, but I haven’t seen that here at the UA.”

While there is a huge market for lab-on-a-chip technology in biomedicine, Yoon is more interested in using the technology in biological engineering; in particular, to detect foodborne and waterborne pathogens. He is one of the first researchers using lab-on-a-chip for food safety and environmental monitoring. His recent research focus is smartphone-based biosensors for pathogens and disease diagnostics.

Yoon has published his findings in nearly 60 peer-reviewed journal articles and has written a textbook on biosensors. He also holds editorial posts on numerous research journals, now including editor-in-chief of Journal of Biological Engineering, the official journal of IBE.

Yoon believes his new appointment will greatly benefit the University of Arizona, its students, and its alumni.

“At my presentation at the 2014 annual meeting of IBE in Lexington, Kentucky, I saw a noticeable rise in attendance and in attention to me, my graduate students, and my postdocs,” he said. “My new appointment may help attract more out-of-state students to the UA and further enhance our reputation as a major research institution, both nationally and internationally.”