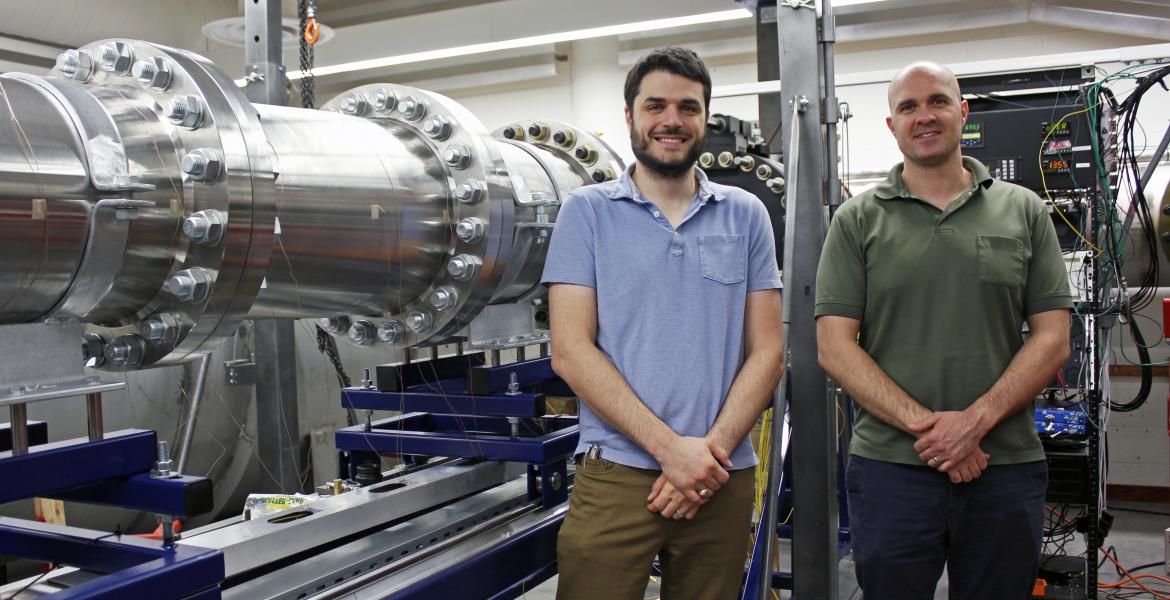 By
Emily Dieckman
Time to read
3 minutes
Print
a- a+
Read so far
The UArizona Department of Aerospace and Mechanical Engineering received more than $3 million in funding in support of their hypersonics research on objects that move faster than the speed of sound.

A group of University of Arizona engineering faculty members is working together to advance research into vehicles moving five times faster than the speed of sound.

Over the course of 2020, faculty members in the Department of Aerospace and Mechanical Engineering received more than $3 million in funding in support of their hypersonics research on objects that move faster than the speed of sound. Hypersonics are expected to play a critical role in the future of national defense, and UArizona is a key player in the field, due to longstanding expertise, international collaborations, industry partnerships and new experimental facilities.

The largest of the grants – $1.5 million from the Air Force Office of Scientific Research in collaboration with the German Aerospace Center, or DLR – will allow researchers to conduct wind tunnel experiments and simulations to complement flight tests being done by DLR. Most of the experiments will take place in UArizona's Mach 5 tunnel, known as LT5.  Air moves through the tunnel at five times the speed of sound.

Jesse Little, associate professor of aerospace and mechanical engineering, is the principal investigator on the grant. He and fellow department faculty members Alex Craig, Hermann Fasel and Anatoli Tumin are the only U.S. collaborators on the Key Technologies for High-Speed Return Flights of Launcher Stages flight experiment, abbreviated as STORT based on the full German name. The Air Force Office of Scientific Research selected the UArizona team after holding a national competition to see who would represent the U.S. branch of the project.

“We are able to compete for these activities because of the investments that have been made into our hypersonics program,” Little said. “If we didn’t have LT5, we wouldn’t have opportunities like this.”

The LT5 tests will involve blasting high-speed air past small objects with geometry similar to the flight vehicle. Researchers will then examine the way boundary layer behavior and phenomena such as shockwaves interact. These interactions have been studied for years, but it’s unclear how they affect newer hypersonic vehicles, which are much smaller and faster than previous flight vehicles.

Shockwaves are another phenomenon that affect high-speed vehicles when upstream air can’t move out of the way quickly enough to adjust its properties – similar to a wave forming around a ship’s bow. This causes an abrupt change in properties such as pressure and temperature around the vehicle.

“The boundary layer flow is already very complicated, but when you add a shockwave to it, things get even more interesting,” Little said. “Normally, we assume the boundary layer is attached to the surface of the vehicle. But in some cases, the flow becomes separated. This creates unsteadiness in the flow, which can lead to vibrations and vehicle damage.”

Separated flow also causes dangerously high levels of heating and can affect the vehicle’s ability to function and be properly controlled.

“When you deflect a fin at a certain angle, you expect it to turn your vehicle by a certain amount,” Little said. “If you have unexpected flow separation in front of the fin, it might not do what you think it’s going to do. Or, the fin might just break off and fly downstream.”

Craig, Fasel and Little also received $600,000 from the Office of Naval Research to further investigate shockwave boundary layer interactions, with a focus on using highly controlled experiments and simulations in the transitional regime.

In 2020, Fasel also received over $500,000 from the U.S. Air Force Academy and Tumin received over $300,000 from the Office of Naval Research for further investigation of hypersonic boundary layer transition. In addition, Craig, Little and fellow aerospace and mechanical engineering faculty members Kyle Hanquist and Bernard Parent received over $100,000 in funding from Raytheon Missiles and Defense.