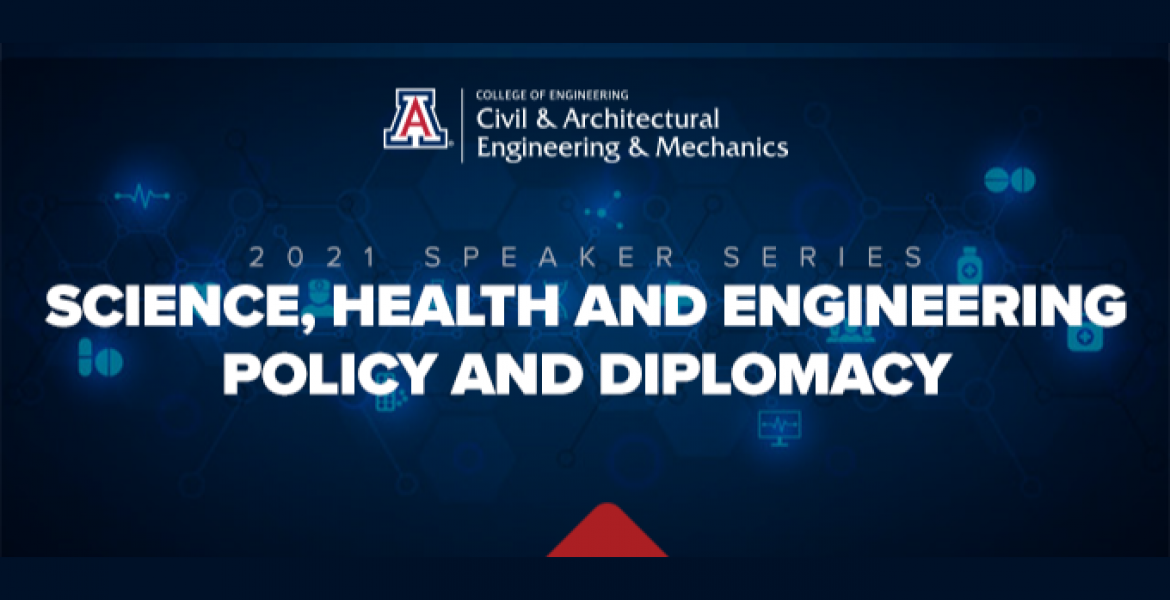 Human beings need to eat. As global population climbs, biodiversity reduces, and climate change affects crop growth, humans may soon need to change the way they eat to ensure a sustainable future. A recent webinar series hosted by the Science Health and Engineering Policy and Diplomacy Initiative at the University of Arizona featured panels of global experts speaking about modern food security challenges and solutions. The two sessions were chaired by Biosphere 2 deputy director for research Cherry Murray and hosted by David W. Hahn, the Craig M. Berge Dean of the College of Engineering.

“When I talk to high school students about science and engineering careers, I always talk about the big societal problems that we need them to help us solve,” Hahn said. “At the top of my list is always ensuring a safe, plentiful and affordable food and water supply to a growing world population – notably so in times of more extreme climate events, such as the current severe drought in the American Southwest.”

The first webinar featured the following panelists, speaking about some of the greatest food-related challenges our world is facing today. James L. Buizer, founding director of the Arizona Institutes for Resilience and professor in the School of Natural Resources and the Environment, served as moderator.

Director of the Institute for Food, Nutrition and Well-Being, Professor of Food Security, Department of Agricultural Economics, University of Pretoria, South Africa

Several speakers cited the statistic that Earth’s population is projected to reach 9.7 billion by 2050 – the equivalent to adding another Africa and Europe’s worth of people. The United Nations projects that to meet the demand for food, global food production will need to increase by 70%, and crop production will need to double. Already, food systems contribute to 30% of greenhouse gas emissions, 75% of deforestation is caused by food systems practices, and 70% of fresh water is used for irrigation. And even with the massive toll food systems take on our environment, 2 billion people have micronutrient deficiencies.

There is no one-size-fits-all solution to addressing this array of challenges. But the experts agreed that some top prospects were digital and energy technologies, genomics, and agricultural education.

The experts agreed that food-related challenges vary widely by community, country and continent. Hendriks spoke about how rates of undernourishment in Africa are more than double the world average, and how the continent’s causes of food insecurity include an economic downturn and ongoing violent conflict. Hodson de Jaramillo emphasized South America’s role as the largest net exporter of agricultural products like coffee, sugar, and many fruits and vegetables. While changes to global food systems might not be easy, she said, they are critical.

In the second session, a new group of panelists spoke about their projects to help combat global food insecurity.

Professor, Agricultural-Biosystems Engineering and the BIO5 Institute, University of Arizona

As moderator Joaquin Ruiz, vice president of global environmental futures and director of Biosphere 2, explained, “These are people that are actually getting their hands dirty – no pun intended – getting food growing in areas that would be considered inhospitable by many.”

Harari shared a project he led to introduce agricultural production methods to the nomadic peoples of Turkana, Africa. In an area with poor soil, frequent drought, and no electricity or roads, it wasn’t an easy task. But, with the help of mentors, the program participants learned to grow fruits and vegetables in a six-month program. Seventy percent of participants continued working on the field after they completed the program.

Cuello focused on vertical farming, which uses 80-90% less water than traditional agriculture, uses significantly less land area, and allows for crops to be grown 24/7, regardless of location or weather. He also spoke about cellular agriculture. He pointed out that such scientific advances have the unfortunate potential to widen the gap between food “haves” and “have nots” among nations, given discrepancies in scientific and technical capabilities.

“This is a powerful rationale for us engaging in science diplomacy, so that there could be sharing of innovation and technologies,” he added.

Ogden spoke about campus collaborations with Indigenous communities, including students who designed a solar-powered water filtration system for the Navajo Nation as a senior project. Their design included a greenhouse in the shape of a hogan – the traditional octagonal shape of many Navajo homes.

Silvertooth talked about how the percentage of people directly involved with agriculture is decreasing: 60% of the global population, 82.3% of the U.S. population, and 90% of the Arizona population live in urban settings. He highlighted the importance of education, working with local populations, and listening to native communities.

“We have a responsibility to unborn generations yet to come, and we stand on the shoulders of many that preceded us to be good stewards of these resources,” Silvertooth said. “And to move them forward productively and safely.”