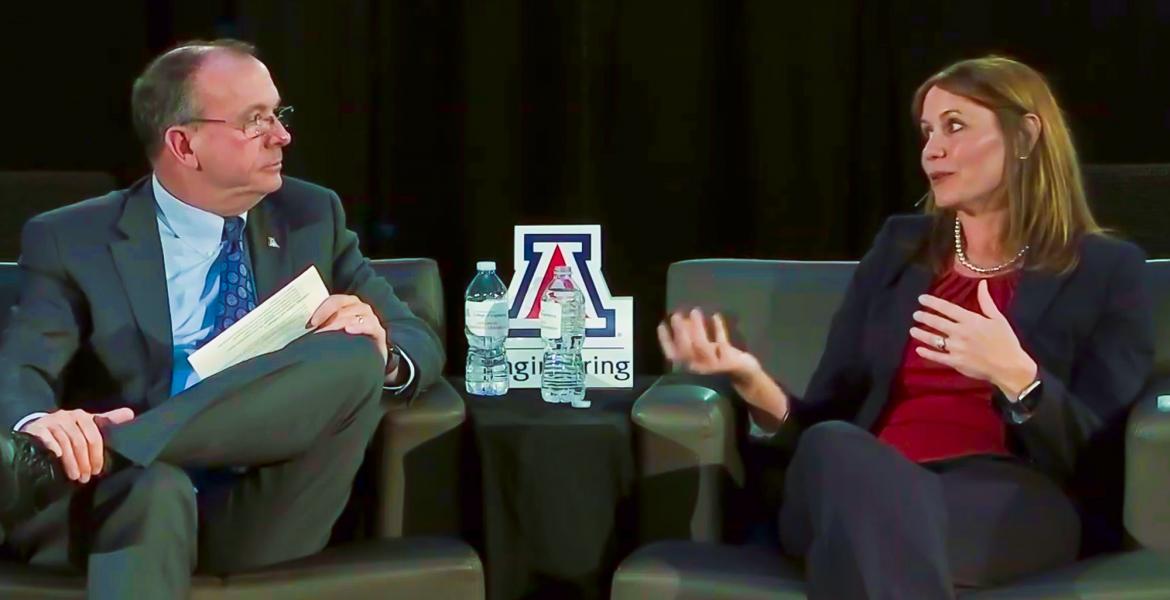 Home / Stories / From Intern to VP: Susan Gray on Rising Through the Ranks of Leadership

From Intern to VP: Susan Gray on Rising Through the Ranks of Leadership

By
Emily Dieckman
Time to read
3 minutes
Print
a- a+
Read so far
UA electrical engineering alumna shares experiences as a woman in engineering and top TEP executive.

Susan Gray, 1996 University of Arizona electrical engineering alumna, used to walk around the house with a screwdriver when she was a kid, telling her parents she wanted to be a mechanic. It was at the UA, where she started off as a biology major, that she discovered how much she loved the math and problem-solving elements of engineering.

Gray returned to her alma mater to speak to students, faculty, staff and alumni about her rise from Tucson Electric Power intern as an undergraduate to the senior vice president and chief operating officer of UNS Energy and its subsidiaries, including Tucson Electric Power. Her conversation with interim College of Engineering Dean Larry Head was the second in the college’s spring speaker series, Lessons in Engineering Leadership.

“I knew early on I wanted to be in leadership, but I would have never guessed I’d have this role,” said Gray, who also went on to earn a Master of Business Administration from the UA Eller College of Management. “The joke now is that all of our interns are ‘future VPs.’ You never know who the next VP is going to be.”

Gray has faced plenty of challenges in her career, from learning how to manage a team of people who had three times as much experience as her to helping different branches of the company, particularly engineers and tradespeople, work together. One of her most important strategies? Learning to listen.

“I think I went from thinking I had all the answers to realizing I had none of the answers,” she said. “I realized I could bring an idea to a team and it could be so much better by the time I walked out of the room if I could just hold loosely to that and let the team build on it.”

She added that a critical part of gaining input from team members is having environments that are not only diverse but inclusive, meaning voices from different backgrounds and perspectives are welcome and valued.

“You have to set up an environment where people feel like, ‘I’m not just invited to be here, but I can actually contribute,’” she said.

Change leadership is another key strategy, she said. While most people don’t like change, it’s easier for employees to accept when they have a say in it than when it’s something that’s done to them.

“If I change my hairdo and I don’t like it, then, oh well. It’ll grow out,” she said. “But if someone chooses to change my hair and it doesn’t go well, it’s not going to sit well.”

Giving Back to Other Women in STEM

Gray grew accustomed to being the only woman in the room early on in her life -- she only remembers two other women in her engineering cohort at the UA, both women who had had careers and were returning to school. When she started working in operations at TEP, she was often referred to as “the girl.”

But she never let her gender, or people’s perceptions of her, get in the way of being successful. Now, she conducts outreach efforts to get girls and young women excited about STEM through groups like Amphitheater Middle School’s Girl Power and as a member of the Boys & Girls Club of Tucson’s board of directors. She also serves on advisory boards for the College of Engineering and Eller College of Management.

“It’s important for girls and young women to see other women doing this,” she said. “We have women demonstrating these crafts at career fairs.”

When TEP hires interns and employees, Gray said they’re looking for people who are technically strong, able to work in teams and “preferably UA grads.”

“Our director of engineering is an ASU grad, but we give her a pass,” she joked. “We do celebrate diversity, after all.”

Other critical traits include intellectual curiosity and strong communication skills, which Gray said she saw in droves in her visit with some of the college’s Engineering Ambassadors earlier in the day. She added that employees who endeavor to understand the way their work impacts the organization as a whole are valued at TEP.

Students in the audience said they found Gray’s talk impactful. Nicolas Tan, an engineering freshman, said he just transitioned into a leadership position in a student club and found Gray’s advice about leadership impactful. Mechanical engineering senior Rene Jones agreed that one of her favorite parts of the talk was when Gray said she doesn’t like to say people work for her, but that she works with people.

“I think she has a very humble approach to leadership,” Jones said. “If I have any interest in becoming a leader, I kind of want to model her approach.”

Register now for the final talk in the college’s Lessons in Engineering Leadership series with Jerry Hunter, BS and MS systems engineering, 1988 and 1990, senior vice president of engineering at Snap Inc.