By
Karina Barrentine
Time to read
5 minutes
Print
a- a+
Read so far
More than 350 students displayed their creations -- from a street sweeper onion-harvesting contraption to a towering 3-D printed rocket that passed all its flight tests -- during the 12th UA Engineering Design Day.

If you were due for a heavy dose of ingenuity, the University of Arizona was the place to be yesterday as more than 350 Engineering students displayed and demoed the results of their year-long senior projects. 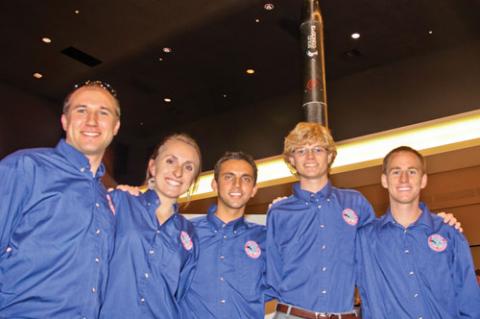 Solar power ruled, rockets fascinated, cameras detected, medical devices remedied, and sustainability was front and center at the 2014 Engineering Design Day, held May 6 in the UA Student Union Memorial Center and on the UA Mall. Top design teams took more than $14,000 in prizes.

There was the modification of a street sweeper to make it into an efficient onion bulb harvester. For their clean, low-cost design that simply worked well, the multidisciplinary team won the Sargent Aerospace and Defense Voltaire Design Award.

A coveted $1,000 Texas Instruments Analog Design Award went to the team of electrical engineering and systems engineering students who created a meter to detect the power consumption of different devices in homes and businesses.

Students at Tanque Verde High School in Tucson, Arizona, have new educational opportunities and home-grown vegetables and fish, thanks to an agriculture and biosystems engineering team on the greenhouse aquaponics project. They won the Rosemont Copper Best Sustainable Engineering Award.

A $770 automated time-lapse camera system to remotely monitor soil erosion was ready to start collecting data this monsoon season on the Walnut Gulch Experimental Watershed near Tombstone, Arizona. The system will sense rain, take photos at 30-second intervals and deliver them on demand to scientists at the Southwest Watershed Research Center.

“Before, someone had to be there on site to monitor the erosion,” said team member Deanna Johnson, a mechanical engineering major, adding that she felt fortunate to work on a “customer-oriented, industry-related project with a client who did a great job of working with us.”

Judges deemed the proof of concept design for a saguaro border surveillance system the most manufacturable of the projects on display, and the team took home a $750 prize, sponsored by AGM Container Controls. The solar-powered network of cameras hidden inside saguaro cactuses was created to stream images to border patrol agents and help them identify illegal border crossers. Seismic sensors in use now detect movement, but they cannot identify what is causing the movement, explained team member Sean Baker, a mechanical engineering student.

“They can’t tell the difference between a cow and a person.” he said. “Agents do not always know what type of situation they are walking into or they use valuable time investigating nonincidents, so this will actually monitor what is out there.”

In the medical arena, award winners included a wireless flow sensor for cerebral spinal fluid, a self-administered tonometer to measure interocular pressure related to glaucoma, a wearable clinical frailty meter to help identify and treat instability and other problems associated with aging, and a cell phone amplifier for people with hearing difficulties.

The most exciting part of the project for many of the aerospace engineering team members: the test launch, of course!

“It was a heart-stopping experience,” exclaimed Austin Mills, who also said he was relieved to see the parachute deploy and the rocket return after its 2,000-foot climb. “Sometimes they don’t.”

The UA Engineering Design Day, sponsored by industry and faculty and supported by judges from local and national engineering firms, is the culmination of the Interdisciplinary Engineering Design Program. Many of the projects go on to become real commercial products.