By
Patrick McNamara
Time to read
2 minutes
Print
a- a+
Read so far
Industry, government leaders talk of ways to grow aerospace and defense sector 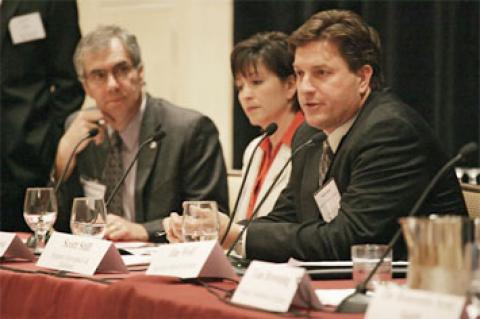 Jeff Goldberg, Mitzi Montoya and Scott Still, from left, were among the panelists at TREO’s aerospace and defense forum.

Southern Arizona’s defense and aerospace industry was the focus of attention of academics, politicians and captains of industry at an April 26 event which included discussion on what the region needs to do to grow the industry as well as to evaluate the impact of potential Defense Department cuts.

How Tucson’s educational system serves the industry was also a topic.

The event at the Hilton El Conquistador Golf and Tennis Resort in Oro Valley was sponsored by Tucson Regional Economic Opportunities (TREO).

Montoya said cooperation within and among the state’s universities has been a key asset that has helped feed the aerospace and defense sectos.

“The willingness to collaborate is really what it takes,” she said.

Smith agreed that a spirit of collaboration would aid Southern Arizona and the rest of the state in growing the aerospace sector, but noted that cooperation was a relatively new phenomenon among the state’s universities.

Smith also said the state needs to recognize that additional assets must be located and leveraged if it hopes to compete for a larger share of the aerospace and defense industry.

“The thought that companies will just be sick and tired of working in southern California and come here simply isn’t going to happen,” Smith said.

Harris said the state, and particularly Southern Arizona, was well positioned to take advantage of a burgeoning defense investment in unmanned aerial vehicles.

“This investment the federal government is about to make has the potential to be transformative,” Harris said, comparing it in magnitude to the federal spending on space exploration that fueled industries in Houston, Texas and parts of Florida.

With two major Air Forece bases and an Army post in the state — Luke and Davis-Monthan Air Force Bases and Fort Huachuca — Arizona could capitalize on that expected market expansion.

Even with the Department of Defense and the Obama administration parsing the details of an expected $487 billion defense budget reduction, Raytheon’s Wolf said the outlook was strong.

“I think when you look where Raytheon is positioned in the industry, we’re actually excited about where we’re going,” Wolf said.

The company has a diversified base of customers, he said, with at least a quarter of clients spread throughout 55 countries other than the U.S.

He noted that much of Southern Arizona’s aerospace industry as well has an international customer base.

All of the panelists spoke of concerns with the state of education in Arizona.

Smith said the state has not invested enough in workforce preparedness programs such as career and technical education.

“We’ve never made the connection as to why this is important,” he said.

Still said his company has had trouble finding qualified employees locally to fill jobs as machinists and other skilled labor positions.

“For machinists, a lot of times we’re paying them as much as an engineer,” Still said.

Montoya said part of the blame for the lack of vocational training can be placed on a nationwide trend of pushing all high school students toward four-year university educations.

“It’s interesting to me that we don’t have a focus on career and technical education,” she said.

The aerospace and defense industries make up a sizable portion of the regional and statewide economies.

In Southern Arizona, there are more than 200 aerospace and defense companies and one in five jobs are tied to those industries.

TREO estimates that the twin industries have an $8 billion impact on the overall economy of Arizona.