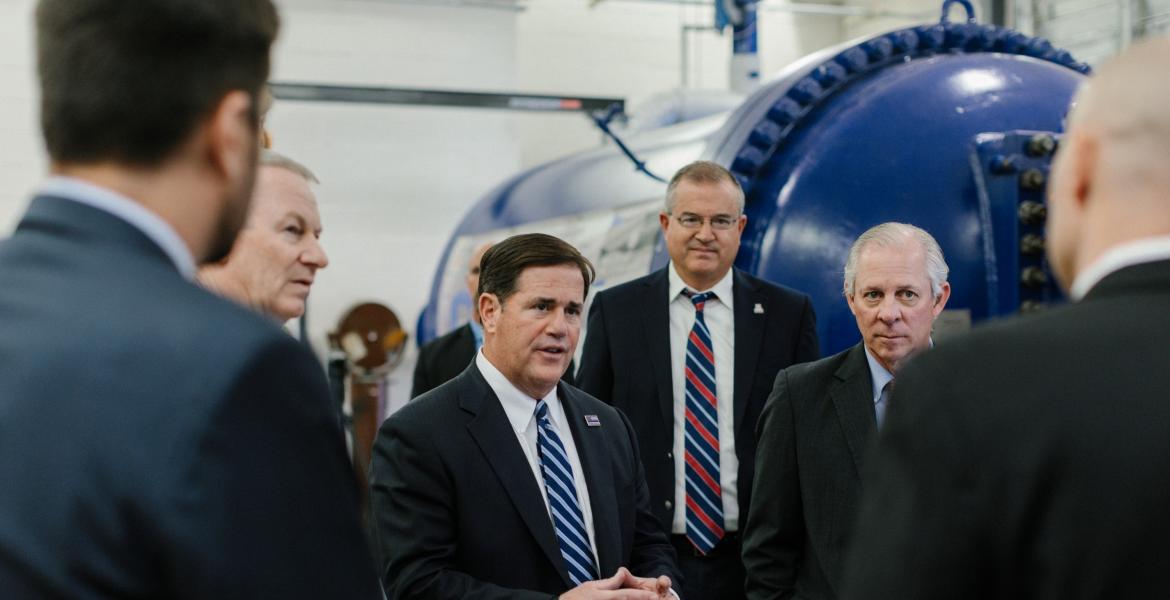 Gov. Ducey Says Investment in Hypersonic Flight is Ticket to the Future

By
Emily Dieckman
Time to read
2 minutes
Print
a- a+
Read so far
The governor joined Raytheon Missiles & Defense president, university leadership, and representatives from the education sector to tour UArizona wind tunnels and discuss the state's STEM workforce.

Gov. Doug Ducey visited the University of Arizona campus Thursday to see the state's New Economy Initiative in action. The initiative is geared toward building a highly educated workforce to meet some of the world's most pressing technological challenges. Its fiscal year 2022 funding included support for UArizona research in hypersonic flight – flight at five times the speed of sound and faster.

"Growing our College of Engineering has been a priority since the beginning of my time here as president, so I am very excited for these developments and for what this partnership will mean not only for the University of Arizona but for our state," Robbins said after the event. "I am so grateful to Governor Doug Ducey and Wes Kremer for being such outstanding partners as we enhance workforce development and research to build a better future for us all."

"Being able to have not only hypersonics capabilities, but being able to defend against hypersonics, is something that is not only important today, but is growing in importance every single day," Kremer said. "Unlike many areas of science, where we have decades of experience, this is an area that's truly emerging."

Vehicles traveling at high speeds, he explained, generate high levels of heat, creating a multidimensional engineering challenge that requires expertise in materials science, propulsion techniques and thermodynamics. Wind tunnels like those on the UArizona campus allow the university and industry partners to conduct experiments with all of these principles in play.

Ducey echoed the importance of wind tunnel research, especially considering how much other countries are investing in hypersonic technology.

Hahn said the people at the roundtable represented a microcosm of the reasons he came to the university in 2019. Among them: a forward-looking state legislature and support from university leadership for ambitious growth goals – including doubling the size of the College of Engineering's undergraduate student population.

"The New Economy Initiative investments are already providing a return on investment," he said. "I'm confident that we'll continue to leverage that to grow this college, grow this industry and provide jobs. At the end of the day, this three-way partnership between the state, the University of Arizona and industry is really the model of success to ensure our competitive edge in the state of Arizona."