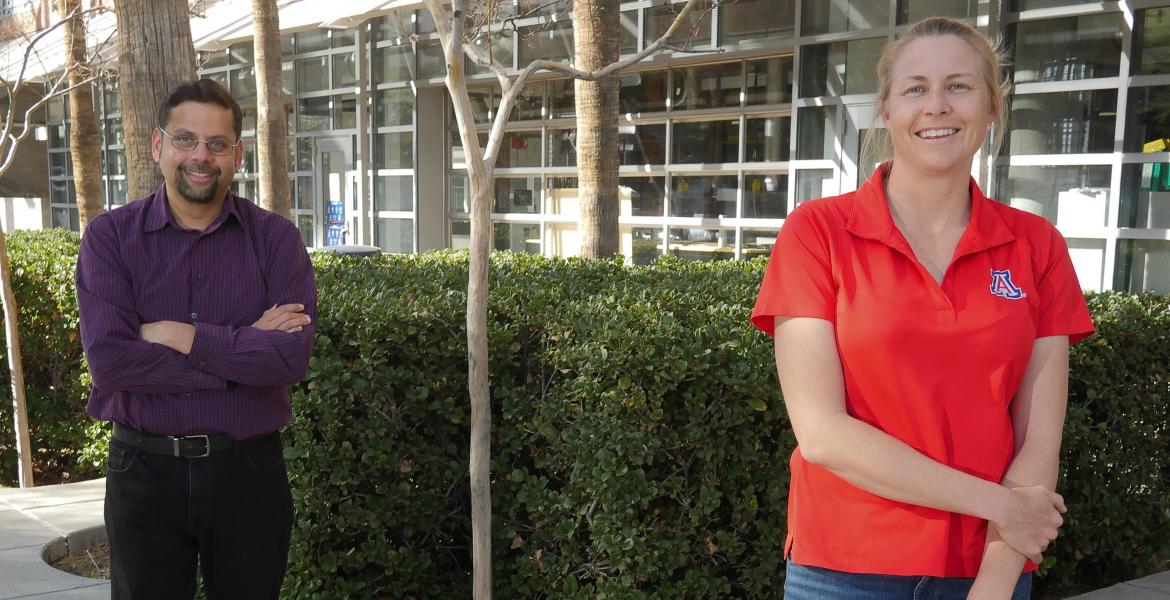 Over the last decade, Arvind Raman and Justine Schluntz have gone from a student-adviser relationship to being colleagues. (Photo: Patrick McArdle)

Former Elite Swimmer and Her Once Adviser Buck Tradition

By
Karina Barrentine
Time to read
2 minutes
Print
a- a+
Read so far
The two started in academia worlds apart, each are in same-sex marriages today, and both are set on preparing students for what’s next.

Justine Schluntz and Arvind Raman are aerospace and mechanical engineering alumni and university employees who have been teaching since 2016. They go way back: Raman was Schluntz’s undergraduate adviser. The two started in academia worlds apart, each are in same sex marriages now, and both are diligently preparing students for what’s next.

“I teach all of my students the best I can,” said Schluntz, assistant teaching professor and faculty adviser for engineering sorority Phi Sigma Rho and the Society of Women Engineers. “For some, I am able to have an even deeper impact, just by being open about who I am.”

Raman moved to Arizona from India 20 years ago when he was 18 to study at Embry-Riddle Aeronautical University in Prescott.

Raman earned two UA master’s degrees – a second in engineering management – and “stumbled across” the academic advising job in the process. He also advises the fraternity Theta Tau, teaches classes, including one on aviation, and does K-12 outreach.

“They think, ‘Maybe I can do it too’ when they see someone in STEM who looks like them.”

Schluntz got a BS in mechanical engineering while breaking records in the pool and racking up titles, including 2010 NCAA Woman of the Year and five-time national champion. She earned a PhD in engineering science at Oxford on a Rhodes Scholarship then was diagnosed with depression, which she openly discusses when student groups invite her to speak.

Depression in elite athletes, who can be reluctant to disclose symptoms, is more common than most people realize. By some accounts, suicide, often connected with depression, is the third-highest cause of death among NCAA athletes. Additionally, some studies indicate LGBTQ+ individuals are twice as likely as others to experience anxiety and depression.

Not wanting to focus on research, Schluntz accepted a policy fellowship in Washington. Six-hundred-page reports on fuel economy weren’t for her either. So she worked as a project manager in the UA’s global office before settling in to teaching.

“What I wasn’t enjoying about engineering was how far removed it felt from having an effect on people.”

Coming Out and Carrying On

Recently married, Schluntz chalks up a disinterest in dating during college to the rigors of swimming and academics. It was only as she wrapped up her time at the UA that she realized there were other reasons. Raman, who has been with his husband for 10 years and married for six, knew he was “different, or gay,” at 8 years old. But he also didn’t come out until after his undergraduate years.

“With every person I told, the burden became less," he said.

For Schluntz, being a woman in STEM has made a greater impression than identifying as a lesbian.

“It’s not as obvious as being a woman," she said.

One student, for example, said, “Having a female thermodynamics professor was extremely empowering.”

Schluntz and Raman are grateful that the college recruits students, faculty and staff who contribute varying perspectives.

Said Schluntz, “If you only have one or two types of people as engineers solving problems, they are only thinking about the problems people like them have faced, and about solutions that work for people like them.”