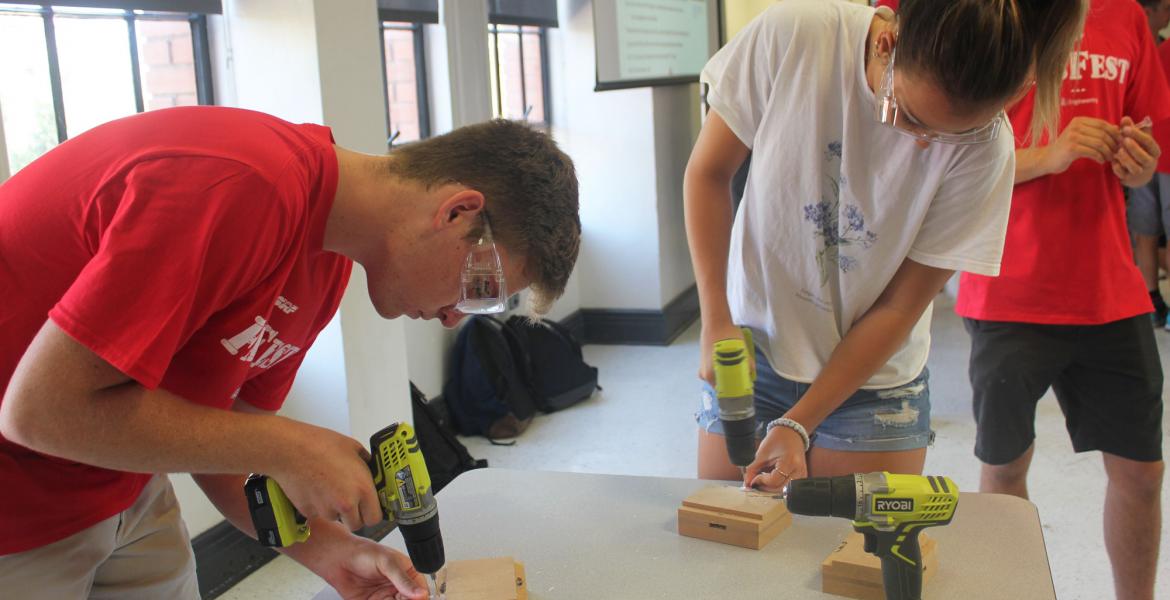 Fab Fun Could Save Lives

Freshmen and sophomores in the University of Arizona’s Engineering 102 course gathered Monday, Sept. 17, and Tuesday, Sept. 18, to fabricate hundreds of water pasteurization indicators, or WAPIs, at the College of Engineering’s first-ever FabFest.

Students moved from station to station constructing the simple but powerful devices: First, they enclosed small pieces of wax into glass tubes by heating the ends of the tubes up and crimping them shut. Then they drilled holes in each end of the devices and threaded wire through them so the WAPIs could be dropped into water to test its potability.

The wax centers in the WAPIs melt at about 149 degrees Fahrenheit, or 65 degrees Celsius. That’s much lower than water’s boiling point, but is hot enough to kill dangerous microbes like Giardia and E. coli. Ensuring the safety of water without using all of the heat necessary to boil it can save more than just energy.

“If you burn one less tree, you save some money and save some trees and maybe save some lives,” said Ken George, an instructor who has been teaching Engineering 102 for nine years.

This was the second year all of the students in Engineering 102 had the opportunity to create WAPIs, thanks to the sponsorship of the Salt River Project. The local utility company paid for the materials and equipment for students to make nearly 500 WAPIs.

“SRP’s involvement in the FabFest provides the opportunity for UA students to work and challenge themselves on real-world issues,” said SRP General Manager and CEO Mike Hummel, an alumnus of the College of Engineering. “By supporting our future engineers, we are encouraging our future workforce to engage in a meaningful and collaborative way to solve problems.”

Last year, the class worked with Toldos Pa’ Mi Gente, a San Juan-based nonprofit, to distribute the WAPIs to people in Puerto Rico in the wake of Hurricane Maria. This year, the class plans to donate them to several chapters of Engineers Without Borders for distribution to people in need.

Freshman Linda Engelman said she’d been looking forward to the event, and was excited to find the WAPIs were simpler to construct than she thought. Freshman Jerah Francone asked George if he could make another WAPI after he finished his, determined to perfect his method, and excited about where the WAPIs might be headed.

”It’s a hands-on building experience,” said Maddy Graham, a senior in the Department of Biomedical Engineering and a TA for the class. “There’s definitely better equipment this year, and it’s cool because these are going to be donated, so people will know when water is safe to drink.”