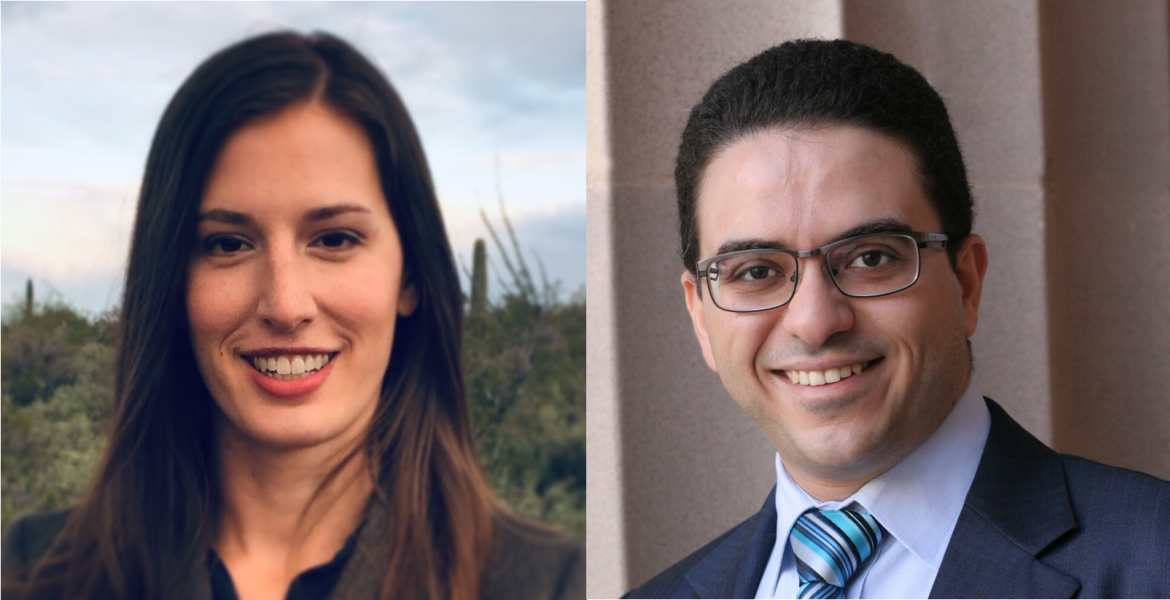 During COVID-19, universities and makerspaces in communities across the country sprang into action to address shortages of personal protective equipment for health care workers. Even faculty and students at the University of Arizona College of Engineering got involved. Hannah Budinoff and Mohammed Shafae, assistant professors in the Department of Systems and Industrial Engineering, recently set out to better understand these efforts and derive lessons to improve future preparedness. To do so, they surveyed 145 informal community-driven PPE 3D-printing manufacturing efforts in the United States, most run by volunteers and occurring in March and April of 2020. They published their results in the Journal of Manufacturing Systems.

Q: Did the majority of the spaces you surveyed have experience producing PPE, or were they producing it for the first time? What were some of the factors that differentiated successful efforts from less successful ones?

Budinoff: These spaces had generally not been used to produce PPE before the pandemic. Under normal circumstances, PPE is mass produced in large factories with tight standards for quality assurance. Makerspace and university staff saw that members of their community needed PPE, so they quickly figured out what designs to make, and started producing 3D printed PPE using their own equipment.

The efforts that produced the most PPE figured out several interesting ways to scale up production quickly. Because 3D printing can be relatively slow, one of the most effective ways to do this was to use dozens of 3D printers at once. Others used optimized PPE designs that took much less time to print. Another factor that helped efforts be successful was partnering with other organizations – like state government agencies, other makerspaces, or local companies – to help with obtaining supplies and distributing PPE to those who needed it.

Q: What spaces were producing PPE, and how much were they producing?

Shafae: Of the efforts we surveyed, 73% were at universities, 21% makerspaces, and 6% local libraries. They were located throughout the United States, in major cities such as New York and Los Angeles, as well as smaller cities such as Portsmouth, NH and San Angelo, TX.

Face shields were the dominant form of PPE being produced: 81% of spaces produced face shields, while 7% only produced masks, 10% produced both masks and shields, and 2% produced other products such as ear savers, clips for powered air purifying respirators, ventilator moisture traps and splitters for ventilators. We think face shields were the most popular because they have a simpler design and regulatory requirements. Based on the average reported production rates, we estimate that the efforts we identified produced over 100,000 units of PPE in total.

Q: Was there anything that particularly surprised you about your research?

Budinoff: I was impressed that people were able to mobilize these production efforts in just a few days, and some even went from idea to mass production in a single day. This is especially impressive considering most efforts improved their design based on user feedback several times. I was also surprised how much variation there was in the amount of PPE different efforts produced, ranging from eight units per day to 1000 units per day.

Despite the wide range of production rates achieved, 99% of our respondents reported that their efforts were successful. My impression was that people involved were happy to contribute their time and energy if they could help even a few people during the crisis.

Q: How much variation did you see between the approaches of different locations?

Shafae: The size and organization of some these informal, volunteer-based approaches were a little bit surprising. Individual efforts involved anywhere from one person to 400 people, with very large efforts not uncommon: Four respondents reported they had more than 100 individuals involved. The number of printers used simultaneously ranged from fewer than six up to approximately 1,000.

Larger efforts followed a spoke-hub production model. In this approach, a university or a makerspace acted as a centralized production center. This space distributed instructions to volunteers who owned their own 3D printers, then collected the finished parts.

We identified 13 such efforts where 19 or more printers were used simultaneously. Three efforts used more than 30 printers in a centralized location.

Q: What are some of the biggest lessons learned or changes that could be made to makerspaces and universities that could allow them to better handle a future crisis?

Shafae: While we observed short lead times for 3D printing efforts, with only a few days between project initiation and production, there were limitations such as high scrap rates, the need for frequent manual intervention, issues with part quality, and high cost per unit.

To address this, we should have plans in place to consider multiple manufacturing methods in future. Additive manufacturing can meet an immediate need, followed by more efficient but still short-term production like using aluminum molds, before resuming traditional mass manufacturing.

Another interesting observation from our survey responses was that differences such as printer models, material sources, and volunteer experience levels produced parts with widely varying quality. To improve our future crisis-driven community responses, we need to focus on ways to maximize product quality. For example, online repositories hosted by NIH, NIST or America Makes could illustrate the production of popular PPE designs and recommend detailed process parameters and quality control advice for each specific design, material and printer type.