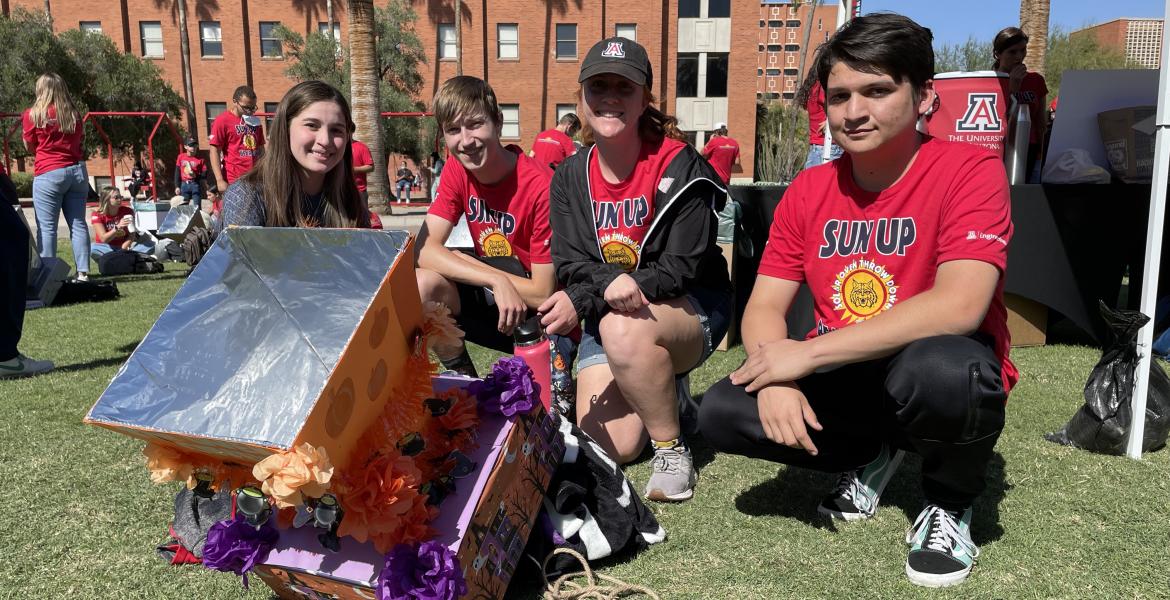 By
Megan Myscofski
Time to read
1 minute
Print
a- a+
Read so far
Over 500 first-year college students and high school students tested home-made solar ovens on the UA Mall.

If you had walked past the University of Arizona mall on Wednesday, you might have thought there was a party happening.

The University of Arizona’s first-year engineering students demonstrated their cooking skills in the college's annual Solar Oven Throw Down event. About 500 students attempted to bake a biscuit using solar ovens on the university mall.

Everyone wore identical red t-shirts, and there were boxes covered in tin foil scattered on the grass.

First-year student Eric Anthony Pineda stood behind one with three of his friends.

"We built this oven that’s powered purely on the sun," he said. "It’s just cardboard boxes. There’s no wires, as you can see, nothing."

The boxes looked pretty similar, although some were decorated and others, like Pineda’s, were all functional.

"It’s pretty straightforward. If you imagine a cardboard box with, with like a trapezoid on top, that’s basically what it is."

There were about 30 engineering instructors circulating the event. Graduate Teaching and Learning Assistant Umar Amjad ran the show this year for the first time.

"They model this oven, and then we provide them logistical support to build it," Amjad said. Amjad is so popular with the students that some asked for his autograph.

The students had to consider more than just the functionality of the oven in designing it; they were required to factor in presentation and cost as well. One team’s purple and orange box stood out most across the lawn.

"It’s a Halloween theme," student Yixel Quevado said about her team's box. "There’s a mansion, haunted mansion, with ghosts around it."

Quevedo's team is named the Oven Coven, and she said they also added some papier-mâché flowers for the Day of the Dead.