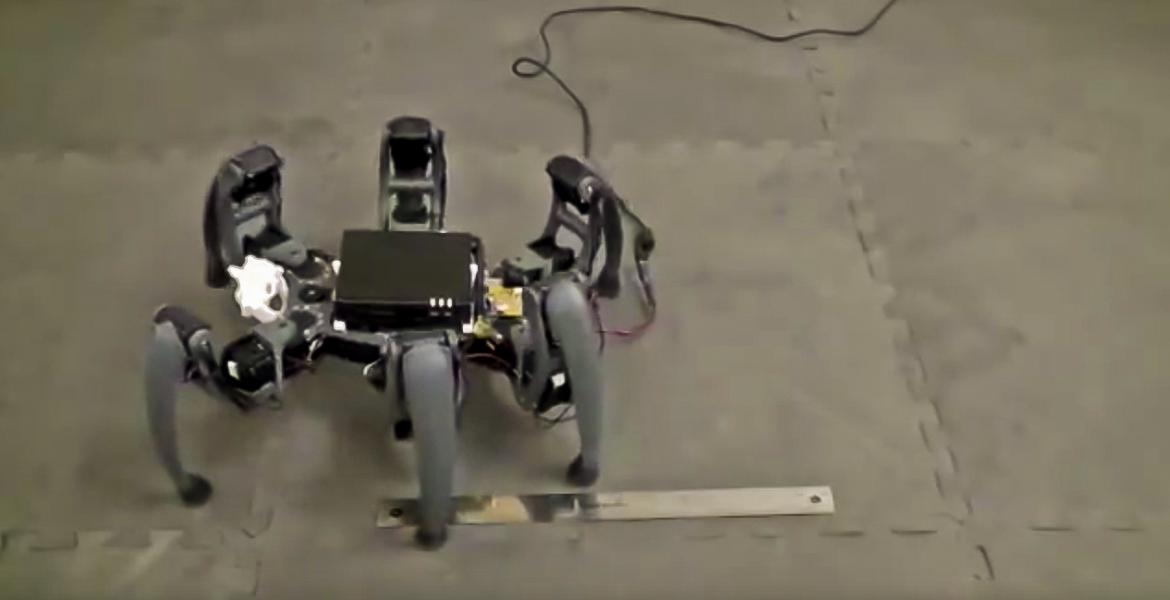 The success of the as-yet-unnamed hexapod, built as a spring 2009 class project for UA cognitive robotics class ECE 596C, includes Intel Corp. ordering two of the robots and Bunting agreeing to develop software for a robotics company’s products.

“One of the things I wanted to explore was the idea of reinforcement learning. What I wanted to do was not preprogram any of those walking algorithms, I wanted it to figure out how to walk straight forward on its own,” Bunting said. “It has the ability to figure it out itself.”

The robot features a camera and uses successively taken images to determine if it is moving forward, sideways or backward or tilting. By analyzing the visual feedback, the robot “learns” though experience how to most effectively achieve its goal of moving straight forward.

Bunting’s instructor, Tony Lewis, UA associate professor of electrical and computer engineering, said, “Matt is exploring a flexible paradigm that can be applied to many different situations: not only walking but perhaps other skilled tasks. And if a leg breaks or a motor gets damaged it can relearn how to walk.”

Bunting posted a YouTube video of his robot in action that quickly caught the eye of Stewart Christie, product marketing engineer with Intel’s Embedded and Communications Group in Chandler, Ariz. Christie asked Bunting to build two of the robots for use as attention-grabbing marketing tools at industry trade shows. The robot uses Intel’s Atom Z530 1.60 GHz processor.

“The main reason is that it is really such a cool looking robot,” said Christie, who seeks devices that highlight the low power capabilities of his firm’s new Atom processor. “We’re looking for the slightly unique, interesting ones. Being a nice slick device that walks around is so much better than a standard desktop demo.”

Impressed by the hexapod design and operation, Dirks sought out Bunting’s expertise. “He has agreed to develop the software for several of our products, starting with a walking robot,” Dirks said. “Robotics are pretty complex, with physics, electronics and software and programming: all these things must come together. He has mastered that at a young age.”

Bunting is still working on improving his hexapod’s design and performance:  “It’s a very good base to perform higher level science. It’s certainly not done. Currently I’m working on terrain adaptation based purely off of vision as a sole sensor, but I do want to further explore reinforcement learning at some time, possibly with different architecture.”

“I see that this device might be doing scientific work like autonomous navigation, mapping of different environments, moving over rough terrain and doing exploration, possibly planetary exploration,” Lewis said. “I think Matt’s robot has a lot of possibilities. It’s really not so farfetched that a robot like this could go to Mars.”