By
Martha Retallick and College of Engineering Staff
Time to read
3 minutes
Print
a- a+
Read so far
Motivated by water shortages in their homelands, Mojtaba Azadi Aghdam and Guangbin Li study water recovery techniques at the UA.

Having enough safe drinking water is a global challenge. In the University of Arizona’s College of Engineering, graduate students from around the world are gaining expertise in water reuse technologies to help improve conditions in their homelands. 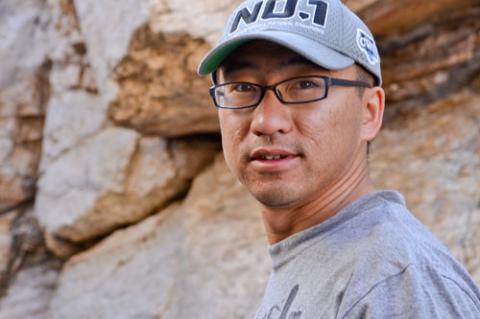 Like the western United States, Iran is in a long-term drought, and Mojtaba aims to bring his UA Engineering education to bear on the water shortage.

Mojtaba achieved one of the highest scores on Iran’s annual examination for high school seniors -- he was in the top 0.3 percent of 350,000 test-takers -- and earned an undergraduate degree in chemical engineering on a full-tuition scholarship from Tehran’s Sharif University of Technology.

His scholarship-winning ways have continued at the UA, most recently with awards from the American Water Works Association, the AZ Water Association, and the Southern Arizona Environmental Management Society. The scholarship trifecta will help Mojtaba continue his master’s work with professor Shane Snyder’s research group in the department of chemical and environmental engineering.

“Mojtaba’s passion and tenacity for water research are inspiring to all of us,” Snyder said. “He has worked diligently at extremely complex engineering challenges, that is, recovery of water from very challenging matrices such as produced water and membrane brine streams. He certainly deserves the recognition.”

In membrane filtration systems, purified water ends up on one side of the membrane and impure water on the other, often to be discharged back into the ocean or other bodies of water. But in regions like the Southwest United States, there are no large bodies of water into which the dirty water can be discharged. Mojtaba is researching better membranes for water purification systems so more water ends up safe to use.

Treating drainage from mine operations can allow water reuse. Mojtaba is working on a six-step process to remove more than 90 percent of the calcium, magnesium, manganese, iron, nickel, zinc and sulfate from mine drainage to produce water at three levels of quality: for discharge into rivers, streams and other bodies of water; drinking; and industrial processes like refining.

In Canadian oil sands, steam is used to increase the viscosity of the trapped oil, allowing it to flow with the water into collection systems. Mojtaba is studying ways to better purify the water resulting from this type of oil production and reduce potential for environmental damage.

Dedication Beyond the Lab

At Sharif University of Technology, Mojtaba’s undergraduate thesis was on applying electrocoagulation, which uses an electric current to remove contaminants, to treat pulp and paper wastewater. He also organized an environmental group to teach Iranians about the country’s water shortage, ways to save water in their everyday lives, and how a change in policy could yield more effective water reuse. All water purification in Iran is aimed at creating drinking water, he explained, even though drinking water is not needed for many purposes, like watering plants.

Mojtaba, who spends his downtime honing his skills as a second-degree black belt karate professional, has a semester remaining in his master’s program. He has not yet decided if he will continue on for a doctorate, but he is sure of one thing: traveling halfway around the world for graduate school was a great choice.

“Courses are to the point and directly related to our field of work, and UA Engineering faculty are highly knowledgeable and always there to help,” he said.

Making Water Safe to Drink in China, and Beyond

“The incidence and mortality of cancer in my hometown increased rapidly, and many people died from cancer potentially caused by long-term exposure to contaminated water and air,” said Li, who earned bachelor’s and master’s degrees in environmental engineering at Harbin Engineering University in China and worked as a research assistant for two companies before coming to the United States. “Water safety is definitely one of the most important things we should care about.”

“My career goal is to become an expert in treating wastewater and remediating contaminated sites, and I hope I can make my own contributions to raising public awareness about environmental protection in China and other developing and underdeveloped countries,” said Li, who has co-authored several scientific journal articles.

“Guangbin Li has turned out to be a very successful researcher,” said Field. “His enthusiasm and teamwork skills, combined with his ability to communicate science, have enabled him to get widely published and win multiple awards.”

In the spring of 2015, those awards have included the top scholarship award and an award for his abstract, “Anaerobic Ammonium Oxidation or Anammox,” from the AZ Water Association; a scholarship from the Southern Arizona Environmental Management Society; and an honorary award from the Arizona Association of Environmental Professionals.

But that’s not all. Li also received a University of Arizona Water Sustainability Graduate Fellowship for 2015-2016, through the state Technology and Research Initiative Fund. The $10,000 award will support Li’s research on nitrogen-removal technology. A second UA Engineering graduate student also received this fellowship for the upcoming year: Shanshan Hou, a doctoral student in industrial engineering.