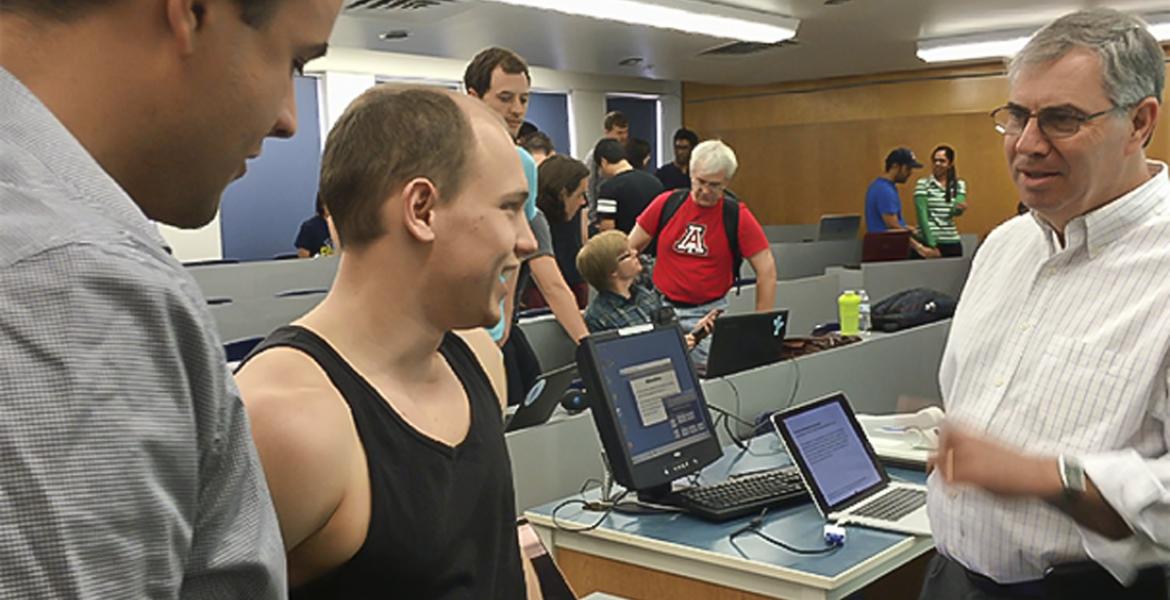 ECE Student Apps Are Putting an End to Everyday Annoyances

By
UA Engineering News Staff
Time to read
2 minutes
Print
a- a+
Read so far
With the mobile apps University of Arizona students are developing in associate professor Jonathan Sprinkle’s software engineering class, users might never get another parking ticket, fumble a PowerPoint presentation or miss an important meeting.

More sleep, fewer cellphone interruptions, pothole-free driving, better time and medication management: There are apps for that, and students at the University of Arizona built them.

Many students looked to annoyances and inconveniences in their own lives for inspiration.

Roads in Tucson, Arizona, are known for their abundant potholes, and one team had had enough of the shake, rattle and roll.

“As a Tucson driver, I encounter potholes all the time, so our team set out to develop an app that makes them easy to find and even easier to avoid,” said programmer Jacob Dorer, whose teammates included Adley Gin and Phillip Gotobed.

Sleep apnea is a common and serious medical condition that diminishes sleep and can lead to high blood pressure, heart disease, stroke and diabetes. Yet many people go undiagnosed and untreated.

“The app is not a replacement for an actual sleep study,” said Lipjanic, “but it provides an inexpensive first step to see if the person may need to see a sleep specialist.”

Timing a PowerPoint presentation just right can be tricky when a presenter is operating a clicker or using a keyboard to advance slides.

No Caddy? No Problem

Bunkers, trees and ponds can be difficult for fledgling golfers to negotiate, especially without a caddy.

An app designed by Thomas May, Steve Murrell and Kyle Walker fills in for caddies. It applies probability and statistics to yardage, hazards and tee shots to help golfers choose the best clubs and take their best next shot.

“It can get you close to where you are trying to get,” said Murrell. “With enough practice, you can sink that hole like a champ.”

Parking Runner, developed by Phillip Showers and Rubi Ballesteros, uses a phone’s built-in navigation system to calculate location and walking speed so users can head back to their cars before their meters run out.

The entrepreneurial course requires students to go beyond adaptation of a mobile device’s existing information, test their software under real-world conditions, and perhaps most importantly, consider what the customer wants.

“They must use of one or more of the phone’s sensors to make the phone do something it couldn’t do before,” said Sprinkle, the Litton Industries John M. Leonis Distinguished Associate Professor. “Students are required to create apps that have potential for commercialization.”