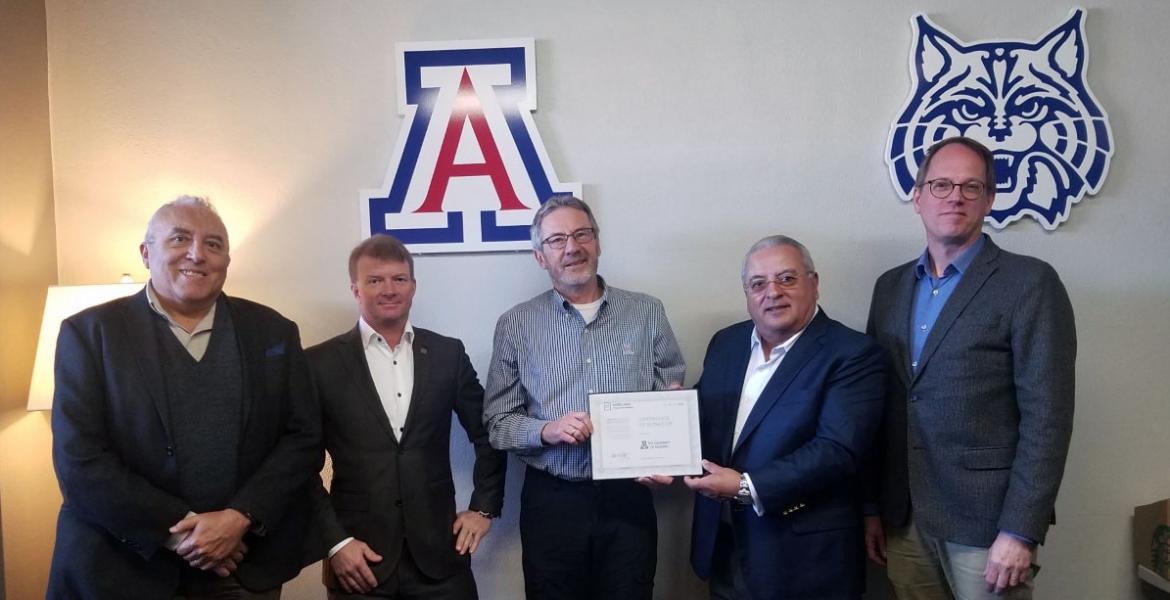 By
Emily Dieckman
Time to read
2 minutes
Print
a- a+
Read so far
Mobilaris Mining & Civil Engineering contributes equipment to help University of Arizona students prepare for careers in the mining industry.

Underground mines, which bring the world vital copper, nickel, silver, tin, lead and other materials, are complex structures. Miners and machines work across many levels of branching paths as they extract tons of ore every day. To excel at safety and efficiency, mines must effectively coordinate all the moving parts.

“This is the state-of-the-art safety product in the industry,” said Alex Cortez, Mobilaris Americas CEO. “Having this software available to students will give Wildcat Engineers an advantage when they get their first jobs and are able to bring a level of familiarity and talent with new technologies.”

Having this software available to students will give Wildcat Engineers an advantage when they get their first jobs."

The company provided a demonstration of the system on campus on Jan. 27, 2020. For now mining and geological engineering students will practice on the software in the classroom, but Mobilaris also plans to install the system in the University of Arizona’s student-run San Xavier Underground Mining Laboratory.

“We do a mine rescue class where we’re working with first responders to do simulations,” said James Werner, assistant director of the mining lab. “It will be really beneficial for the students to get this involved and have actual miners be underground.”

When Hans Wahlquist, vice president of business development and strategic product management, and Daniel Enström, CTO, at Mobilaris, were in town for the presentation, they toured the Goodenough Mine -- once a major silver producer for nearby Tombstone.

Technology has come a long way since that 19th century mining by candlelight, but there is still room for improvement. Rescue teams responding to fires and other disasters, for example, traditionally go down a list of names, calling workers one by one to determine who is safe. Knowing where personnel are from one minute to the next can speed up emergency evacuations and rescues.

“It could take an hour just to get the situational awareness, before even starting with the rescue,” Wahlquist said. “With this system, mine personnel get situational awareness in a second, because they have it all the time. Then they can send out a warning to workers and see who has gotten the message, who has acknowledged it and who has not. Now, evacuation takes about nine minutes.”

Just as the technology knows where people are, it knows where equipment is. It even indicates what machines are under repair and when they are scheduled to return to work.

“Our software combines situational awareness with short interval control, or the ability to re-plan the shift during the shift -- almost like a coach during the hockey game, who is able to call a timeout, regroup and send the team out with a new plan,” Wahlquist said.

The software can help mine personnel avoid situations such as two vehicles traveling in opposite directions meeting on a narrow path. The vehicles could lose time maneuvering past each other and even incur damage. A heavy truck forced to stop on a slope, for instance, runs the risk of a burned out gearbox.

Mining and geological engineering faculty members are incorporating the software into classes on underground mine design, equipment operations and technology, and geopositioning.

“The idea of Mobilaris Mining Intelligence fits into many different courses we teach,” said John Kemeny, former head of the Department of Mining and Geological Engineering. “At the university, we want to embrace these technologies and make sure students are prepared for what they’ll be using in industry.”