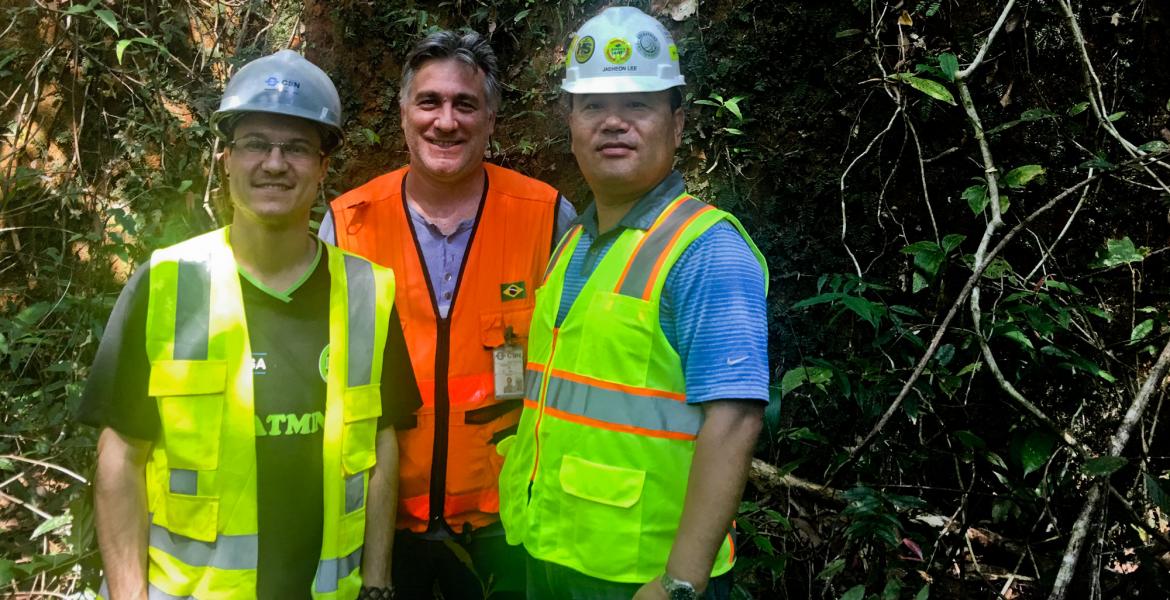 When Eric Ballinger, a project manager at Companhia Siderúrgica Nacional, or CSN Mining, a Brazilian steel and mining company, started looking around for U.S. universities his company could partner with, the University of Arizona’s world-renowned mining department was one of the first places he thought of.

Ballinger and CSN Mining decided to partner with Jaeheon Lee, an associate professor in the University of Arizona Department of Mining and Geological Engineering and former senior process engineer at Barrick Gold and senior metallurgical engineer at Newmont Mining. CSN has gifted more than $300,000 to support Lee’s research since 2016, and Lee will use the funds to help improve the efficiency and safety of tin and niobium mines in Brazil.

“He comes from industry, so he understands both perspectives -- our needs and the academic side,” Ballinger said. “If he might not have a specific skill set, he goes out and finds someone who does. We give him a challenge, and he comes back with answers.”

The Power of Collaboration

Lee is well-versed in working collaboratively, due in part to nearly a decade of experience in industry. He’s conducted economic and metallurgical analysis at CSN’s Santa Barbara tin mine in the Brazilian state of Rondônia, and has worked with organizations as far as the Korea Institute of Geoscience and Mineral Resources, and as close as Freeport-McMoRan’s technology center in Tucson, Arizona.

His work with CSN Mining began with a visit to Brazil, where he collected and tested samples from the Santa Barbara mine. He reported back good news: The sample was rich in rare earth metals, which are in increasing demand.

“This is probably the first really good chemical and mineralogical analysis they’ve had done for their mine,” Lee said. “Now, we can optimize the process to get more material out of the mine and determine which processing method is the best.”

In a second visit to Brazil in August 2018, Lee visited several sites with a group of geologists and identified about 1,300 pounds of samples from 16 locations, which will be shipped back to Arizona for him to analyze, with a view to determining the best extraction methods.

Lee will also be working with UA graduate students to characterize the materials and investigate ways to increase value recovery in the mine based on the samples.

“The whole process is a geometallurgical study of the ore deposit, and participating graduate students will gain hand-on experience in ore characterization and process development,” he said.

When Brazil’s Samarco tailings dam failed in 2015, billions of tons of material ran downstream, and the Brazilian government asked other companies to provide clear plans for how to prevent similar failures in their own mines.

CSN Mining, which was already committed to increasing the sustainability of its operations, doubled down on its efforts to balance the mine’s productivity with consideration for the environment. It was one more reason why Ballinger thought Lee could bring value to the CSN Mining team.

“With some of our challenges, we had nowhere to go and we didn’t know how to solve them,” Ballinger said. “He’s been key in helping us with those situations.”

Lee, who also recently received an academic career development grant from the Society for Mining, Metallurgy and Exploration, said working with CSN Mining has been an invaluable opportunity to shape relationships -- and ship rocks.

“They are an international company, and they looked into working with many other universities,” Lee said. “I’m really lucky to have a connection with them and to get this opportunity.”