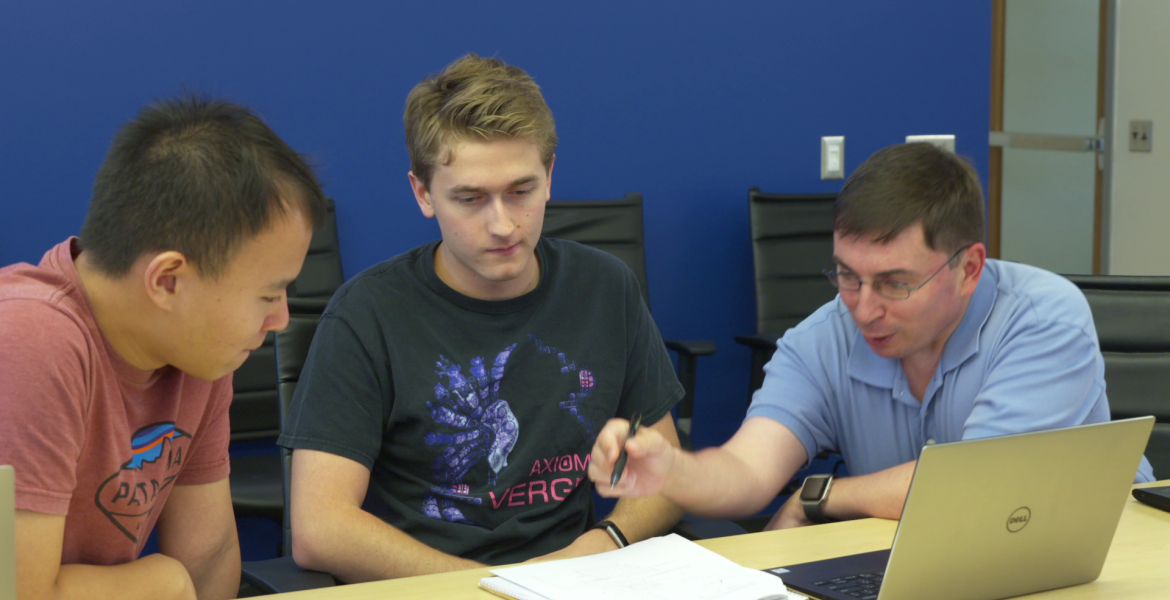 By
Emily Dieckman
Time to read
3 minutes
Print
a- a+
Read so far
ECE researcher builds on WWII methods to reach the pinnacle of secret communications.

Boulat Bash, an assistant professor of electrical and computer engineering at the University of Arizona, says if you want to learn more about his research, you have to start with Hedy Lamarr, the Austrian-American actress and inventor.

During World War II, Lamarr helped devise a method for the U.S. government to send messages not just securely, so enemies couldn’t decode the contents, but also covertly, so they wouldn’t even know a message was being sent. For comparison, imagine running across a field guarded by armed snipers. While a bulletproof vest might offer protection from serious injury, a soundproof invisibility cloak preventing you from being detected at all would provide a welcome few extra layers of security.

Her invention was an early version of spread spectrum communications, which involves dividing a message into small pieces and spreading it across many frequencies, rather than sending it on only one channel. To an adversary, these small blips on different channels look like nothing more than random noise. However, a recipient who knows what to look for can watch all the channels and piece the message back together into a whole.

“The underlying problem is how to prevent a signal from being detected by an adversary, by protecting the existence of the message itself,” Bash said “To jam the signal, the Germans would have had to know that that signal was there and where it was.”

The work of Lamarr and other scientists went on to become the foundation for jamming-resistant radar in the 1950s and the earliest cellphones. Covert communications are also used in military operations and by organizers of social unrest. Thus far, almost all the applications for spread spectrum communications have been classical, not quantum. Classical computing uses bits, units of information that exist as either 0s or 1s. Quantum computing is exponentially more powerful because it uses qubits, which can exist in both states at the same time. For example, in 2019, a quantum computer performed a calculation in just three minutes that would take 10,000 years for a classical computer to perform.

With $500,000 in funding from the National Science Foundation, Bash and his team are investigating ways to harness quantum techniques for covert communication networks to operate at their utmost levels of security and efficiency.

Bash was researching wireless communication security in 2012 when he uncovered the fundamental limit of covert communications, or exactly how much information could reliably be transmitted via covert communications. The number of reliably transmissible bits, or pieces of information, is equal to a constant times the square root of n, where n equals the time-bandwidth product (a measure resources available to transmit a signal). This simple equation, c√n , made a big splash.

“Boulat’s work told us the maximum amount of information a person can send reliably and covertly, while assuming the adversary is as powerful as possible,” said Saikat Guha, a professor of optical sciences, who at one time worked with Bash in the quantum information processing group at Raytheon BBN Technologies. “It set the bounds on what can be done and let us evaluate how much room our current systems have to improve compared with these limits.”

Bash’s paper on the square root law opened up a new subfield within the field of information theory, with hundreds of papers subsequently being published on the subject. But, again, most of this new work used classical approaches.

“Moving from square root law to the linear law increases the covert information throughput tremendously,” Bash said. “That has not been done for quantum at all, so we’re going to address that in this project.”

As communicating parties become more powerful, so too can their adversaries. Thus, part of this project will focus on how to keep communications secure even when a quantum-powered adversary has all the resources allowable by the laws of physics.

Much of the preliminary work for the project was done by electrical and computer engineering PhD student Michael Bullock, when he was still an undergraduate. Bullock is among the university’s inaugural class of Herbold Fellows and was named the department’s 2020 outstanding senior.

“This project will allow us to continue in the same vein of involving undergraduates in this work,” Bash said. “We would not be here without students. That’s why I love being able to teach.”