By
Karina Barrentine
Time to read
2 minutes
Print
a- a+
Read so far
University of Arizona researchers create a first-of-its-kind thermostat add-on that reliably predicts electricity costs, putting consumers in control of balancing their comfort and budget.

Researchers at the University of Arizona, with the support of Tech Launch Arizona, are one step closer to giving consumers something they’ve never had before: a way to easily and instantly make informed decisions about the tradeoff between comfort and the cost of electricity for heating and cooling, which typically accounts for half of a home’s electricity bill. 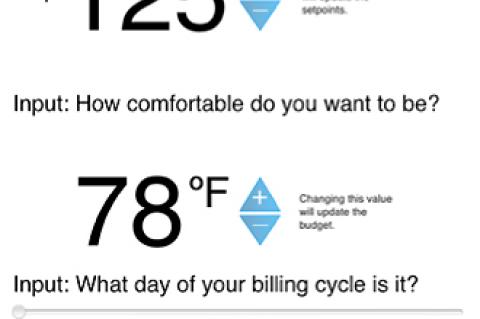 An interface for the cost-limiting temperature-control device advises users of electricity costs for thermostat settings.

Associate professor Jonathan Sprinkle and a team of researchers in the electrical and computer engineering department have developed a monitor that works with a Wi-Fi enabled thermostat to automatically manage temperature settings based on how much consumers choose to spend on electricity, not just on how cool or warm they want to be at any given time.

Unlike smart thermostats that expect consumers to reduce energy consumption by choosing set points using their intuition of savings, this technology translates thermostat changes into dollars before the electricity bill lands in the mailbox.

“Many people do not understand how much energy and money they could be saving,” Sprinkle said. “They just set their thermostat in the desired temperature range then get a bill at the end of the month with no understanding of how they correlate. With this technology, people can decide what they want their comfort levels to be depending on how much they want to spend for electricity.”

Start-Up Ramps Up for Production

Tech Launch Arizona, a University of Arizona arm that helps faculty members commercialize their inventions, has filed for a patent on behalf of the University and recently executed a contract that licenses the technology to the start-up company, Acomni LLC. Now the company is looking toward securing investors and partnering with utility companies and heating and cooling businesses to get the device into homes.

“Tech Launch Arizona has helped us -- particularly through their Proof of Concept program -- move from having a proven idea and prototype, to licensing the invention to our company, and now toward producing a product,” said Sprinkle. “They play a big role in connecting researchers with the business community.”

Sprinkle’s team is focusing on heating and cooling power consumption because it uses the largest portion of electricity consumed in U.S. homes -- up to half, according to the Department of Energy. But the company has plans to apply the cost-limiting technology to smart energy management of the whole home.

How the Thermostat Add-On Works

The monitor, which shares information between the home’s thermostat and dedicated Acomni servers, learns the temperature-related characteristics of the home then forecasts costs using information about the outside climate, residents’ comfort and budget preferences, and data from the thermostat.

A mobile application or web interface provides the user with feedback on how changes in temperature settings and budget affect one another; automatically implements daily thermostat set points to meet the budget; and tells the user how manual thermostat changes are likely to affect budget limits.

Benefits Stretch Beyond the Pocketbook

The cost-limiting temperature control technology has the potential to reach beyond the pocketbook. As Sprinkle points out, becoming aware of energy consumption is the first step toward using energy more efficiently and minimizing a home’s carbon footprint.

“Most people do not realize it, but by some measures we spend as much energy heating and cooling our homes as we do driving our cars,” he said.

More efficient electric power usage means lower emissions from fossil fuels being burned to generate electricity. In fact, the Environmental Protection Agency estimates that adjusting our thermostats just 2 degrees down in winter and 2 degrees up in summer reduces our carbon footprint by 2,000 pounds a year.