Ana Moreno, a project engineer who graduated from the University of Arizona agriculture and biosystems engineering program in December 2011, is currently leading an engineering project to find a new cannula.

At a recent open house for the company she works for, Moreno demonstrated a new cannula design concept to interested investors, engineers and other attendees. A cannula is that clear tube that medical patients wear under their noses and wrapped around their heads to receive oxygen and other prescribed gases. People suffering from sleep apnea use cannulas, and finding a new type of apparatus that's more comfortable than the widely used version currently on the market would mean a lot to the client company.

Meanwhile, less than 100 feet away from Moreno's demonstration, five refrigerator-sized batteries from Australia -- designed specifically to store significant amounts of electricity generated by alternative energy sources -- were boxed in the warehouse portion of the facility, ready for shipping. The newly designed batteries will be installed at test sites in California, New Mexico, Florida and here in Arizona, in coordination with the UA's Arizona Research Institute for Solar Energy, or AzRISE.

What do these products have in common?

They're both from a company that is working to slash the time it takes to move new technologies from prototype to marketplace.

The company, Tucson-based Aztera LLC, is using not only an agile product management method, but it's using grads from UA engineering, optics, biomedical, and engineering management programs to do so. 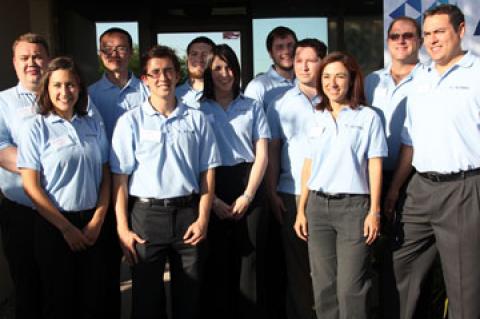 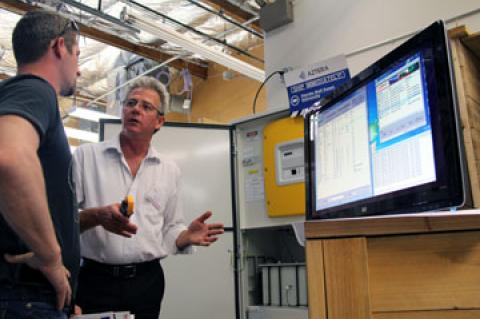 All but one of Aztera LLC employees are University of Arizona graduates, said Aztera President and CEO Manny Teran, far right. UA College of Engineering photo.

Aztera, founded in February 2010 by UA engineering graduate Manny Teran, currently has about 12 employees serving 30 customers, and all the employees save one are UA graduates or attending the UA.

Teran, Aztera president and CEO, credits his company's ability to accelerate technology development to an agile product management methodology combined with hiring engineers familiar with specific technologies. Aztera customers include multibillion-dollar companies such as Intel and Texas Instruments, all the way down to one-employee startups.

"What makes it viable for these companies is that we're able to take their technology and very quickly develop it and make a preproduction prototype. And then support them as they go to market," Teran said. "Oftentimes, researchers don’t have the business acumen to bring their own technologies to the market."

Aztera's support for UA science and engineering grads is in sync with the university's Tech Launch Arizona initiative, launched last year by UA President Eugene Sander. The initiative is designed to improve how the university works with businesses, researchers, inventors and other groups that focus on transferring ideas and technologies to the marketplace.

"That’s the commercialization engine that's going to take technologies from these colleges, and bring them to market," Teran said. "We're hoping to be one of the channels that the colleges use." Aztera partnerships with research-based groups such as AzRISE and The Solar Zone could result in the successful introduction of brand new products, likeb the alternative energy storage battery.

Brisbane, Australia-based RedFlow Ltd. designed the specialized battery, which is able to store electricity generated by alternative energy sources using a zinc bromide electrolyte solution. The battery is a potentially lower-cost energy storage alternative, and is designed for use with smart grid systems that support electricity networks running on intermittent sources.

RedFlow is working with Aztera to launch its products in the U.S. because the American market for its technologies is bigger than originally anticipated. As a result, five refrigerator-sized batteries arrived in Tucson in April, and Aztera is now in the process of shipping and installing them at test sites across the country.

"We have had numerous conversations with the university, and they are interested in our ability to very quickly validate their technology and develop a working prototype," said Ana Grief, director of corporate development at Aztera. "We have the ability to then take the prototype and push it through to full commercialization," she said.

"Engineering research alone isn't enough," said Jeff Goldberg, dean of the UA College of Engineering. "Our engineering has to result in bringing products on line so they can be presented to the marketplace by companies like this," he said.

Teran says the rapid introduction of new products by Aztera extends further than Arizona. Besides energy storage technology from Australia, the company is currently talking to a group in Sweden, and is also planning to open an office before end of year in Hermosillo, Mexico, where the company plans to take technologies being developed in Mexico and introduce them to U.S. markets.

UA biosystems engineering graduate Moreno, the lead engineer on the new cannula design project, has worked for Aztera for three months and says the opportunity is only the beginning of her career.

Her next stop is the National Institutes of Health in Washington, D.C., where she'll serve in a 10-week internship as a biosystems engineer before heading west to the University of California, San Diego, where she plans to earn her master's degree.

"This is great exposure," Moreno said of the Aztera work. "Since the company is small, you can get the lead on small projects. Here, I've written proposals and worked directly with engineers."

Steven Hickey, head of battery testing at Redflow Ltd., demonstrates a new alternative energy storage system that uses a zinc bromide solution. The large battery is one of the new technologies being introduced to the market by Aztera LLC. UA College of Engineering photo