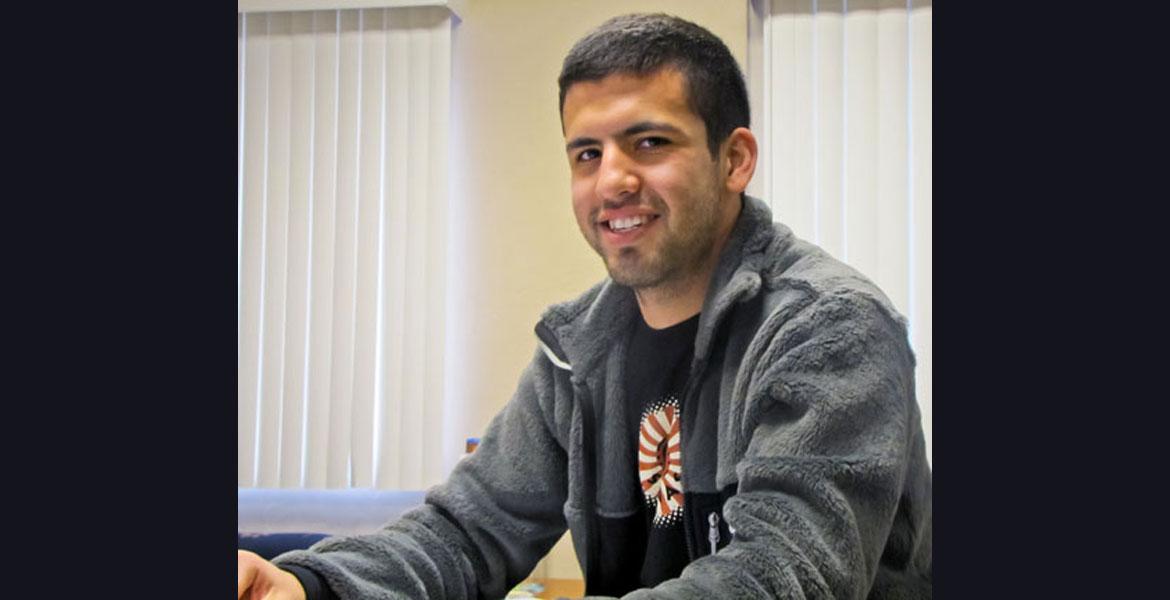 By
Pete Brown
Time to read
2 minutes
Print
a- a+
Read so far
Student grew up on the Navajo Nation with his mother, to whom he attributes most of his success.

This award is given annually by Student Affairs at the December commencement to one male and one female graduating senior, and recognizes students who have shown integrity, overcome great challenges to acquire a university education, and who have made contributions to their family and community.

Moriarty grew up on the Navajo Nation with his mother, to whom he attributes most of his success. He attended St. Michael's Indian School and was later awarded the Gates Millennium Scholarship, which allowed him to attend the University of Arizona.

Moriarty said the award means a great deal to him, his family, and his community. "I didn't grow up in a privileged household," he said. "But my mother, who is a teacher on the Navajo Nation, taught me from a young age that I shouldn't let anything stand in my way when pursuing an education."

Moriarty, who completed an internship with Sandia Labs this summer, will graduate with a bachelor's degree in civil engineering. "We are especially proud because Dylan is a former MESA [Mathematics, Engineering, Science Achievement] student and a current employee in the Office of Early Academic Outreach," said Lori Tochihara, associate dean of students.

Since his freshman year, Moriarty has worked for the Office of Early Academic Outreach, whose mission is to increase the number of ethnic minority, low-income and first-generation college-bound students. As part of the outreach program, he was exposed to the challenges faced by Native American and underrepresented students and wanted to make a difference.

Tochihara recently gave a presentation to tribal leaders about the award, and Moriarty reports that his mother has been approached and congratulated on his achievement. "Native Americans have the lowest retention rates in higher education and it is always celebrated when students receive such academic awards," Moriarty said. "I hope receiving this award can show other underrepresented students that it is possible to succeed even if they are from underprivileged backgrounds."

During Moriarty's junior year at the UA he was accepted into the Ronald E. McNair Achievement program, which strives to prepare underrepresented students for doctoral programs through undergraduate research. Moriarty quickly became hooked on research and has presented his research at multiple conferences.

During the Society for the Advancement of Chicanos and Native Americans in Science Conference he noticed the many young scientists of ethnic minority in attendance. Inspired by the immense potential seen in underrepresented students at the conference, Moriarty realized there was much work to be done to bring more students of similar backgrounds into the sciences. He returned to the UA and helped revitalize the local society chapter and is now chapter president with plans to firmly reestablish the organization before he graduates.

Moriarty has received several awards, including the Native American Freshman and Undergraduate of the Year awards in 2008 and 2011, awarded by the UA's Native American Student Affairs. He has also maintained an overall GPA of 3.57 and holds a 3.87 within his major.

Moriarty acknowledges the guidance he received during his undergraduate years in UA Engineering. "Although I have strived to be the best student possible, this award is a testament to all of the dedicated UA staff who have helped me along the way," he said. "Without their help I would not have been in the place that I am now."

After graduation, Moriarty plans to pursue a masters/PhD program in energy resources engineering with the hope of creating clean sources of energy on tribal lands. "I feel that this recognition will help me in being accepted to a graduate program as well as finding a job in a research laboratory," he said. "It is my hope that I can work in a research laboratory where I can position myself in order to help my community with energy and an effective infrastructure."

Moriarty is "clearly a student leader" and "a great role model as a successful Native American student," said College of Engineering Dean Jeff Goldberg. "If we are to solve hard societal problems like affordable renewable energy and sustainable water supply, then we are going to need creative ideas from a broad group of individuals."

Some of this article was first published on the website of the Dean of Students Office.