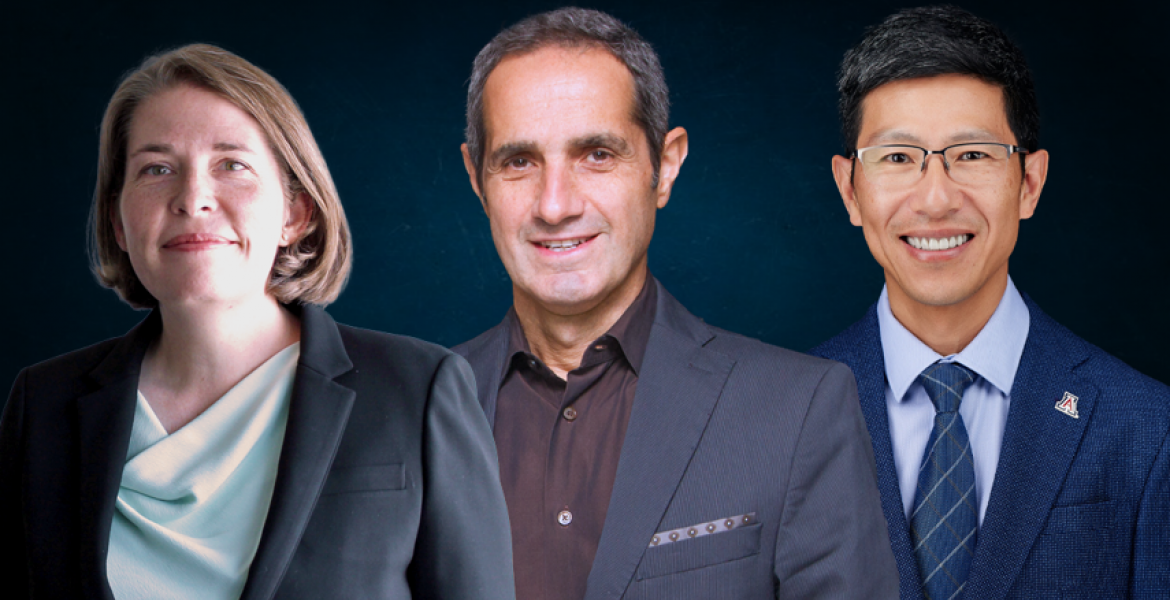 By
Emily Dieckman
Time to read
5 minutes
Print
a- a+
Read so far
Experts selected from a national pool of candidates will lead aerospace and mechanical engineering, mining and geological engineering, and electrical and computer engineering programs, while a longtime faculty member steps up as interim head of systems and industrial engineering.

All three new hires have built or expanded successful programs at other universities and share a commitment to doing the same at the University of Arizona. Kray Luxbacher, Farzad Mashayek and Michael Wu come with fresh ideas, big plans and a readiness to listen to and learn from current faculty, staff and students about the unique needs of their new home departments. Ricardo Valerdi, who has been with the college for more than a decade, looks forward to continuing the ongoing expansion of the systems and industrial engineering program.

“We are thrilled to have these exceptionally well-qualified department heads and delighted that we continue to attract such top talent to the college,” said David W. Hahn, Craig M. Berge Dean of the College of Engineering. “I am confident that Kray, Farzad, Michael and Ricardo will advance the college’s mission and goals, including to double undergraduate enrollment and expand our research enterprises in areas including mine safety, hypersonic flight and quantum computing.”

Kray Luxbacher joins the UA after working as a faculty member at the Department of Mining and Minerals at Virginia Tech since 2008 and as department head since 2019. An expert in atmospheric monitoring, ventilation system characterization, mine fire simulation and prevention, and mine risk analysis, she will serve as the inaugural Gregory H. and Lisa S. Boyce Leadership Chair of Mining and Geological Engineering.

Luxbacher earned her BS, MS and PhD in mining engineering from Virginia Tech. She was the first female tenure-track professor hired in her department and served as the faculty advisor for the Bevlee Watford Society for Diversity and Inclusion in Mining at Virginia Tech. Originally called Women in Mining, the club expanded over the years to include a wider population, a shift that Luxbacher sees as important for the entire mining industry.

“Mining engineering provides really dynamic, high-paying, fun careers,” she said. “The fact that there aren’t more women and more underrepresented minorities in the industry is a disservice to everyone. In particular, the global nature of the industry and the complex engineering challenges it presents, require diverse groups of engineers."

Luxbacher is a member of the National Academies of Sciences, Engineering and Medicine Committee on Earth Resources and previously held appointments at the National Institute for Occupational Safety and Health's Mine Safety and Health Research Advisory Committee. A registered professional engineer in Virginia, Luxbacher has also worked in industry as a mining engineer, industrial engineer and underground production foreman. She is active on several Society of Mining, Metallurgy and Exploration communities and chaired the 2015 North American Mine Symposium in Blackburg, VA.

She is drawn to the UA for its location at the heart of the Southwest mining community, for its ownership of the San Xavier Underground Mining Laboratory and for the new School of Mining and Mineral Resources. She also loves the outdoors and looks forward to exploring Tucson’s natural beauty.

“Everything is really coming together at the University of Arizona for mining,” she said. “The university enjoys substantial external support for mining, domestic production of minerals for low carbon energy transitions is now a key federal initiative, and the school allows us to bring considerable multi-disciplinary expertise to solving the challenges of modern mineral production. It's a really exciting time to be here.”

Farzad Mashayek began teaching in the Department of Mechanical and Industrial Engineering at the University of Illinois at Chicago in 2000. After being named department head in 2009, he spent the next 13 years doubling the size of the faculty, increasing undergraduate enrollment by 85%, and growing graduate enrollment by 120%. He also led development of the department’s first five-year strategic plan. It included the goal of tripling research expenditures for the department, which was surpassed. He looks forward to helping AME see similar growth.

Mashayek’s own research is in part focused on two-phase turbulent reactive flow, and his research group has been working toward developing a software for numerical simulation of supersonic combustion in advanced engines. He also has ongoing research activities in energy storage and batteries, as well as electrostatic atomization.

A fellow of the American Society of Mechanical Engineers and an Associate Fellow of the American Institute of Aeronautics and Astronautics, Mashayek has received both an NSF CAREER Award and an Office of Naval Research Young Investigator Award. He has served as a member of ASME’s Mechanical Engineering Department Heads Executive Committee, on the organizing committees for multiple conferences and as a journal associate editor.

Mashayek is an avid runner, and Tucson’s reputation as a running community is another factor that drew him to the position. He also views running a race and running a department as similar challenges: They involve setting incremental goals, setting out at a steady pace rather than a sprint, and always overcoming new obstacles. He looks forward to expanding AME using a combination of his own expertise and the established strategic goals of the UA and College of Engineering.

“If you want to create a vision and excitement among the faculty, you’ve got to set some goals,” he said. “Life is a journey. You set goals and you challenge yourself.”

When Old Dominion University recruited Hongyi (Michael) Wu as the Batten Chair of Cybersecurity and the director of the School of Cybersecurity, the program’s first cohort had 11 students. In the last six years, Wu, also a professor in the Department of Electrical and Computer Engineering with a joint appointment in the Department of Computer Science, expanded the program to nearly 1,000 students – 60% of whom are from underrepresented minority backgrounds. Now, he’s coming to the UA to help grow degree programs, expand research portfolios, and develop new industry partnerships.

Wu holds a BS in scientific instruments from Zhejiang University, an MS in electrical and computer engineering from SUNY Buffalo, and a PhD in computer science, also from SUNY Buffalo. His current research focuses on security and privacy in intelligent computing and communication systems. He has chaired several conferences, including IEEE Infocom 2020, and is on the editorial board for journals such as IEEE Transactions on Computers, IEEE Transactions on Mobile Computing, IEEE Transactions on Parallel and Distributed Systems and the IEEE Internet of Things Journal. A Fellow of IEEE, he also received the NSF CAREER Award in 2004 and the IEEE Percom Mark Weiser Best Paper Award in 2018.

Wu enjoys working in leadership because he can touch so many different areas – much like the field of ECE itself, which is applicable to fields including quantum computing, cybersecurity, artificial intelligence, medical technology, drones, and autonomous vehicles.

“I really see that ECE is going to play a critical role in transforming a lot of those technologies,” said Wu, who is also a runner looking forward to racking up miles in Tucson. “We are already a very strong department, but we want to place ourselves among the top programs in the nation and in the world.”

Many of the research colleagues Wu respects are based at the UA, and one of his best friends is an alum who always had good things to say about the university. Wu noted that one UA alum co-authored four papers at a recent conference he attended, where it was a significant feat to co-author even one.

“That’s amazing productivity, and kind of a testimony to the quality of education at the university,” he said. “And the ongoing initiatives in the department and the college are just really promising.”

Ricardo Valerdi is a Distinguished Outreach Professor and faculty athletics representative who has been with the College of Engineering since 2011. He holds a BS in electrical engineering from the University of San Diego, an MS in system architecture and engineering from the University of Southern California, and a PhD in industrial and systems engineering, also from USC. He worked closely with former department heads Larry Head and Young-Jun Son and hopes to build upon the work they have done for SIE in his interim role.

“We have a history of strong department heads that I am looking to continue,” he said.