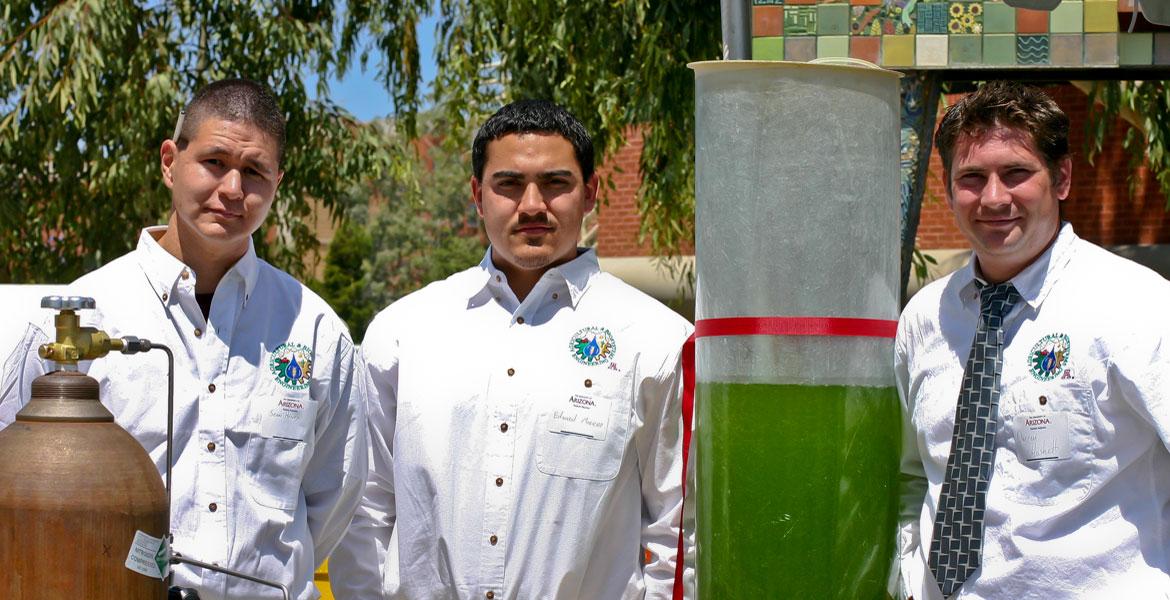 During the 2008 Engineering Design Day, agricultural and biosystems engineering students displayed the bioreactor they used for growing algae for an algal-oil experiment. The students are, from left, Sean Henry, Edward Moreno and Darren Haskett.

By
Martha Ostheimer
Time to read
3 minutes
Print
a- a+
Read so far
The senior capstone program gives students experience working on real-world design projects that involve budgets, reviews and deadlines. Many of the projects go on to yield patented commercial products.

Wireless sensors alerting firefighters to potential harm and an environmentally sound boat engine for use in national parks are among the student engineering projects to be showcased next week.

These two projects are among more than 50 designed by University of Arizona engineering students to be shown at Engineering Design Day, the UA College of Engineering's premier showcase of student design.

"Design Day is the end of a year-long experience that involved students working on real problems with real clients," said Jeff Goldberg, the college's dean. "The program gives engineering students a chance to apply four years of engineering education to a project that has real benefit."

"It's an exciting time that validates all the work we have done with the students during the preceding four years," Goldberg added. "What I like about it is that it's a warm-up. These students are about to go out into industry and do this for real. It massively increases their chances of being successful in the next project."

Eyes on the Prize

Design Day is organized by the college's Interdisciplinary Design Program and is co-sponsored by Lockheed Martin and BAE Systems as well as the College.

Seniors in the UA College of Engineering will compete for thousands of dollars in prize money during the competition, which is held annually. The students have been working on their projects for two semesters and will present them on May 5 from 10 a.m. to 3 p.m. in the Student Union Memorial Center's Grand Ballroom, 1303 E. University Blvd.

Event judges are practicing engineers from companies throughout the country and will review the design presentations and demonstrations. The judges will then compile a list of finalists to be reviewed a second time during the afternoon. The award ceremony will be held at 4 p.m.

Completing a Senior Capstone Project as a team is a graduation requirement for most UA engineering students and the showcase is a chance to present the college's expertise in areas such as biomonitoring and in environmental and sustainable engineered systems.

The senior capstone program gives students experience working on real-world design projects that involve budgets, reviews and deadlines. Many of the projects go on to yield patented commercial products.

The projects are sponsored and funded by faculty and industry partners such as Lockheed Martin, Ventana Medical Systems, BAE Systems, Raytheon, Texas Instruments, Edmund Optics and Honeywell. The companies also sponsor prizes and provide some of the many professional engineers who serve as judges.

One telemetry project has resulted in wireless sensors for firefighters at the scene of an emergency. The sensors measure temperature, oxygen and carbon monoxide levels in the firefighter's immediate surroundings. Firefighters wear a small transceiver that constantly transmits data from the sensors to a central base station monitored by the fire chief at a safe distance from the scene. The system sounds an alarm when certain critical readings are recorded and informs the chief which firefighters tripped the alarm.

Other students will demonstrate a motorboat propulsion system outside on the north side of the building. These motors have been designed to be suitable for commercial river operations inside Grand Canyon and Glen Canyon national parks. The river outfitters associations that run concessions in the parks are sponsoring the projects.

The Grand Canyon sponsors specified that the propulsion system should use non-fossil fuel to minimize emissions, be able to run for at least 300 miles and have enough power to replace the 30-horsepower engines currently in use. The sponsor also specified that the system should be durable, quiet, self-contained and transferable between different watercraft.

Another biomonitoring project has the potential to alert drivers – long-distance truck drivers, for example – just before they fall asleep at the wheel. The comfortable, battery-operated device sends out a wireless signal to activate an alarm when it registers brain wave activity associated with the onset of sleep.

Another group is developing an affordable solar or battery-powered water and milk purifying system that uses ultraviolet light to kill pathogens. The purifier has huge potential for reducing disease in such places as rural Africa. The project is sponsored by Meridian Design and has attracted funding from the Bill and Melinda Gates Foundation. Prototypes of the design will be tested in Africa this summer.

Outside the Grand Ballroom, students will display their latest vehicle models – including several solar cars and the Baja formula racecar, all of which participate in national university competitions.

"This design process requires that the teams thoroughly understand the requirements of the customer and that they design working prototypes that meet both the technical and functional requirements for their design," said Martha Ostheimer, program director for the Interdisciplinary Engineering Design Program.

That includes learning "how to bring the project in on time and within budget, and using the oral and written skills required to successfully communicate their design process and results to a diverse audience of technical and nontechnical people," she said.