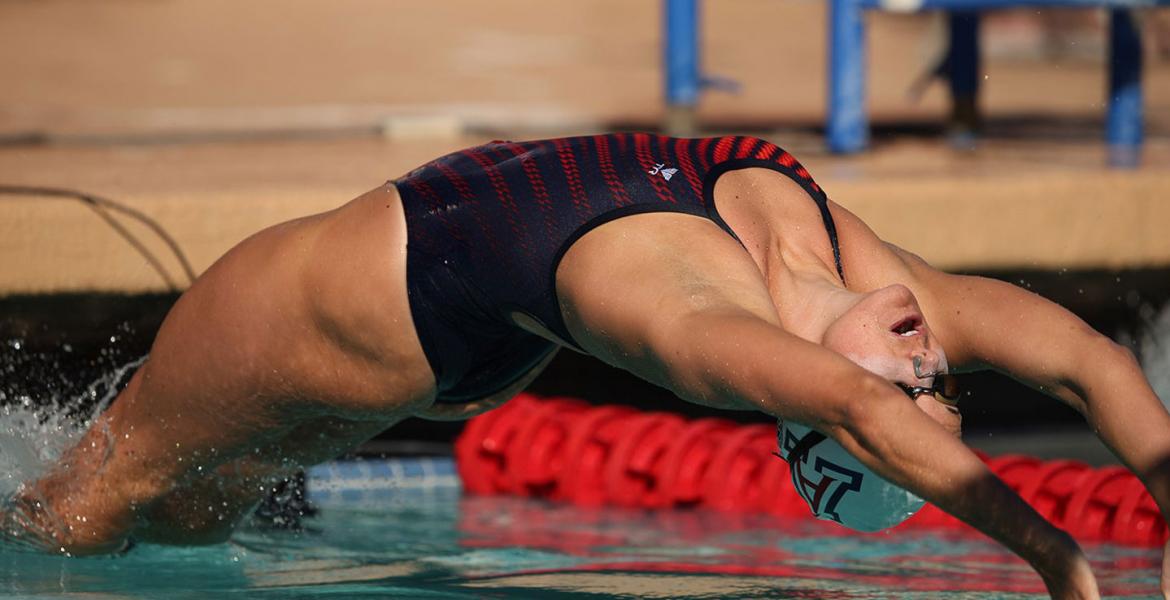 Biomedical engineering alumna Cameron McHugh competes in the pool. (Photo: Arizona Athletics)
Home / Stories / Class of 2018: Where Are They Now?

By
Emily Dieckman
Time to read
4 minutes
Print
a- a+
Read so far
The newest additions to the UA Engineering alumni family share updates on where their education has led them.

It’s only been three months since the Class of 2018 walked across the stage at graduation, but they’re already off to study in graduate school, cast metal in materials science careers and hit it out of the park on the baseball diamond.

Once a Wildcat, Always a Wildcat

Jesse Chen transferred to the University of Arizona in spring 2017, looking for industrial engineering classes and warmer temperatures not to be found at his school in North Dakota or in his native Vancouver, Canada.

Before he graduated with his mechanical engineering degree in May, he applied for graduate programs at several schools with a view to earning a PhD. Ultimately, the full funding the UA Department of Aerospace and Mechanical Engineering offered him and the bike friendliness of Tucson -- People for Bikes ranked Tucson among the top five cities for bicyclists in the United States in 2018 -- won him over.

He’d already decided he was most interested in the fluid dynamics aspect of mechanical engineering, and under his PhD adviser Israel Wygnanski he’s focusing his studies on active flow control.

“Basically, we have a slot in the wing or rudder -- or somewhere on the plane -- and air is blown out of it and it changes the way air flows around the area of the aircraft. In a good way: It makes the plane more efficient.”

He advises students to work hard during their undergrad years, especially outside the classroom. That means getting involved with research projects and design-build-compete clubs like the Baja Racing Team. Starting early, he says, can increase your chances of landing a coveted internship after junior year.

“The summer after freshman year, find a professor to work with or a research project to work on, even if it’s just something basic,” he said. “Eventually, you’ll work on more advanced things, and it can help you gain an understanding of what you enjoy.”

In high school, Cameron McHugh was ranked the second-best swimmer in Texas and the 74th best swimmer in the country, according to collegeswimming.com.

When it came time to earn her undergraduate degree, McHugh chose UA over Stanford, Florida and Texas A&M because of the university’s swim program. The student-athlete went on to receive All-American Honors in the 800 free relay and to be named a CSCAA Scholar All-America honoree. Now that she’s done with her undergraduate degree from the Department of Biomedical Engineering, she’s headed off to Stanford for her master’s degree in mechanical engineering with an emphasis in product design.

She says on her LinkedIn page that she’d like to work as a design engineer at a sports production company to combine two of her passions: athletics and engineering.

McHugh ended her senior year in the Engineering Design Program, working with the UA Center on Aging and a team of fellow students to develop the UA Balance App. The app is designed to help older adults improve their balance, posture and neuromuscular control, reducing their risk of falling and serious injury. MedPage Today, an online resource for health care professionals and physicians, named it a “Must-Have Medical App.” McHugh said it was rewarding to see the hard work and research the team put into their project pay off.

“I really enjoyed working on a project that can have an effect on people's everyday life,” she said. “Engineering is pointless if it cannot be used to help people and in some way improve their lives.”

Not Far From Home

Phoenix native Austin Grimm chose UA because he liked the engineering program and the campus. Joining the Wildcat Formula Racing team during his freshman year was key as he started exploring options for what to major in, because his teammates were there to answer his questions. Ultimately, Grimm settled on a major in materials science and engineering.

“MSE has a lot of options in terms of what direction in the industry you want to go -- or even if you want to go the academic route,” he said. “There’s not really a company you can’t work for as a materials engineer.”

After graduation, Grimm landed a position as a tower engineer at ME Elecmetal in Tempe, Arizona, where he works in the melt department as a shift supervisor. He and the people he oversees create steel and iron castings out of molten metal, which are then shipped off and used all over the world in the mining and construction industries.

While many of his responsibilities were taught to him on the job, he said he is grateful his UA education taught him how to learn, so he’s able to pick up new skills efficiently. His advice to incoming students is to be prepared for their careers in engineering to involve a lifetime of learning.

“You go to a job and 95 percent of the time you’re being taught what you’ll be doing at that job,” he said. “It’s important to figure out the best way that you learn, and do that really well. I’d focus on learning how to work well in a team and learning how to learn.”

From Hitting the Books to Hitting Home Runs

Anthony Vega has been playing organized baseball since he was 5 years old, 22 years ago. He was drafted by the Baltimore Orioles in 2012, and has been playing for the Long Island Ducks since 2015. However, earning a college degree was always a priority for him.

“Even if I made it to the major leagues, it was something I wanted to finish,” he said. “I’m the kind of person that once I start something, I want to see it through. Nobody in my family had ever gotten a degree before.”

He studied computer engineering at Manhattan College in New York City for a period, and came to UA to finish his studies. He balanced his time as a member of the Long Island Ducks with his schoolwork, and earned his degree from the Department of Electrical and Computer Engineering in May 2018.

“The engineering degree is very valuable to me, especially as it’s a UA degree, which carries significant weight,” he said. “When it’s time for me to enter the workforce with the people I’ve met between baseball and coaching, this degree will go a long way in helping me to get there.”

His biggest piece of advice to incoming students: Learn how to manage your time early, so that you can be successful in the classroom and fulfilled outside of it.

“I enjoyed my time at UA, and I’m glad that the college and the department gave me a way to achieve a dream of mine. I’ll forever be grateful to the University of Arizona, and particularly to my academic adviser, Sydney Donaldson.”