Robert B. Fleischman, a professor of civil engineering and engineering mechanics at the University of Arizona, was the principal investigator on a research project that has won the 2016 Charles H. Pankow Award for Innovation from the American Society of Civil Engineers. Fleischman and several co-researchers will be recognized at a formal awards ceremony on March 17 in Arlington, Virginia. 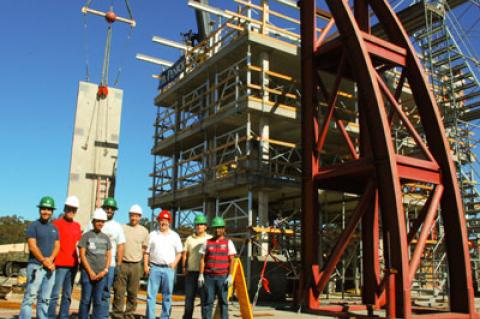 “I’m still looking for a tux,” quipped Fleischman, more accustomed to working at a computer in jeans and sneakers, or donning boots and a hardhat for earthquake shake tables, than addressing a well-heeled audience.

But he is no stranger to collaborating closely with industry leaders or receiving top industry awards.

Fleischman is receiving this latest honor for “Seismic Design Methodology for Precast Concrete Diaphragms,” a 10-year collaborative project completed in 2014 that has won several other awards.

He and members of his team will accept the Pankow Award from ASCE president Mark Woodson, a University of Arizona alumnus who earned his bachelor’s degree in civil engineering in 1979 and MBA in 1985. Woodson’s son John also graduated from the UA civil engineering program, with bachelor’s and master’s degrees in 2003 and 2008. Robert Fleischman was his adviser. 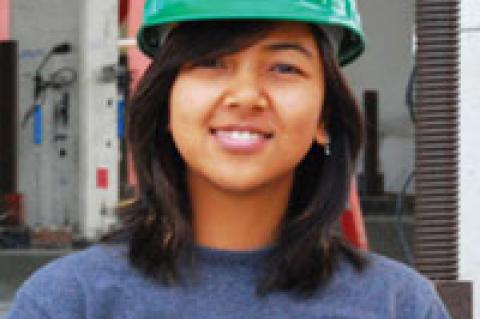 Fleischman, a Pennsylvania native, earned his bachelor’s degree in civil engineering from Carnegie-Mellon University in 1985 and master’s and doctoral degrees in the same field from Lehigh University in 1989 and 1995.

He joined a professor commissioned to assess the damage and saw how the precast concrete flooring used in parking garages, though embedded with pre-stressing steel, had ripped apart.

“Assembling concrete structures from precast pieces offers phenomenal benefits in cost and time savings. The problem is that these precast structures are not one continuous piece of concrete, but many pieces stitched together. In a major earthquake, their connections can fail,” Fleischman said.

“Our primary goal with this project was to show you could still build efficiently -- and safely -- with precast concrete flooring.”

Fleischman came up with new ways to design concrete flooring structures, or diaphragms, that transfer seismic forces from the floors to columns and walls and down to the foundation. This involved making the diaphragms’ connections stronger and more flexible in the joints between the precast units.

Several major facilities have been involved in the project, which was funded by the National Science Foundation and the Precast/Prestressed Concrete Institute.

Fleischman’s graduate students, led by Dichuan Zhang, now on the faculty of Nazarbayev University in the Republic of Kazakhstan, conducted the computer modeling in Fleischman’s lab at the UA. Next, researchers at a Lehigh testing facility built concrete structures based on their computer results. The precast diaphragms were then shipped to the University of California, San Diego, and inserted as flooring in multistory test structures on a massive outdoor shake table.

The concrete structures held tight -- even at jolts of magnitude 7.0 and greater.

“We attacked a complicated problem and conducted computer simulation and experimentation to develop a design procedure -- then proved it worked in large-scale structural testing, and changed the building codes,” Fleischman said. “I think that’s why ASCE chose our project for this award.”

Fleischman worked on steel and concrete skyscrapers in New York and Chicago for two years after getting his doctorate. But the crumbled concrete of Northridge left a strong impression. He embarked on a structural engineering teaching and research career at the University of Notre Dame and joined the University of Arizona faculty in 2000.

Since then he has led several influential research projects, published scores of research papers, taught hundreds of students and hammered out better building codes. His team’s precast concrete design techniques will be incorporated in the federal building code in 2016.

Help for Haiti and Nepal

After Haiti’s magnitude-7.0 earthquake on Jan. 12, 2010, he led a research team to assess the devastation and participated in an international workshop comprising engineers, social scientists, international aid workers and Port-au-Prince residents.

“The Haiti earthquake was not as strong as many others we’ve seen, yet nearly a quarter of a million people died,” Fleischman said. “I saw firsthand how many issues underlying seismic safety are less about engineering than about geopolitics and socioeconomics.”

That lesson was reinforced eight months later, on Sept. 4, 2010, when an earthquake registering 7.1 struck Canterbury, New Zealand, a region with modern construction technology and well-enforced construction codes. There were no initial casualties. A 6.3-magnitude aftershock six months later in more populated Christchurch killed 185.

Fleischman often wishes he could have done more for Haiti. But his work there did enable his graduate student to help another earthquake-ravaged country four years later.

On April 25, 2015, more than 9,000 were killed and countless injured when an 8.1-magnitude quake hit Nepal. Ulina Shakya, a doctoral student in civil engineering who came to the UA specifically to do research with Fleischman, feared for her family and country.

Through Fleischman’s contacts in Haiti, she was on her way to Nepal a week after the quake with an internship. Shakya joined an international contingent of engineers in Kathmandu to inspect houses and determine if displaced residents could safely return home. She also traveled to other regions to study construction materials and conduct surveys.

“Dr. Fleischman has been a true inspiration,” said Shakya, who spent three months in Nepal and is on track to complete her dissertation this year. “Even though I was new to graduate school, he asked me to assist him with shake table testing at UCSD, which I did for a semester. I will always be grateful to him for being my adviser and supporting me, even in my difficult times.”

Fleischman, the recipient of six teaching awards, has also inspired many undergraduates.

Patrick Hughes was his research assistant for a year and a half before receiving a bachelor’s degree in civil engineering at the UA in 2015.

“Dr. Fleischman paired me with his most experienced grad students so that I could tackle the massive learning curve inherent in undergraduate research,” he said. “I gained technical skills, like programming and seismic design, and other skills, like how to work effectively with a research team. This training gave me a tremendous advantage applying to graduate schools.”

Hughes is pursuing his doctorate in structural engineering at UCSD.

“I have Dr. Fleischman to thank for my success in grad school thus far,” he said.

Major funding for the project was provided by the Precast/Prestressed Concrete Institute, NSF/Network for Earthquake Engineering Simulation Research Program and the Charles Pankow Foundation.