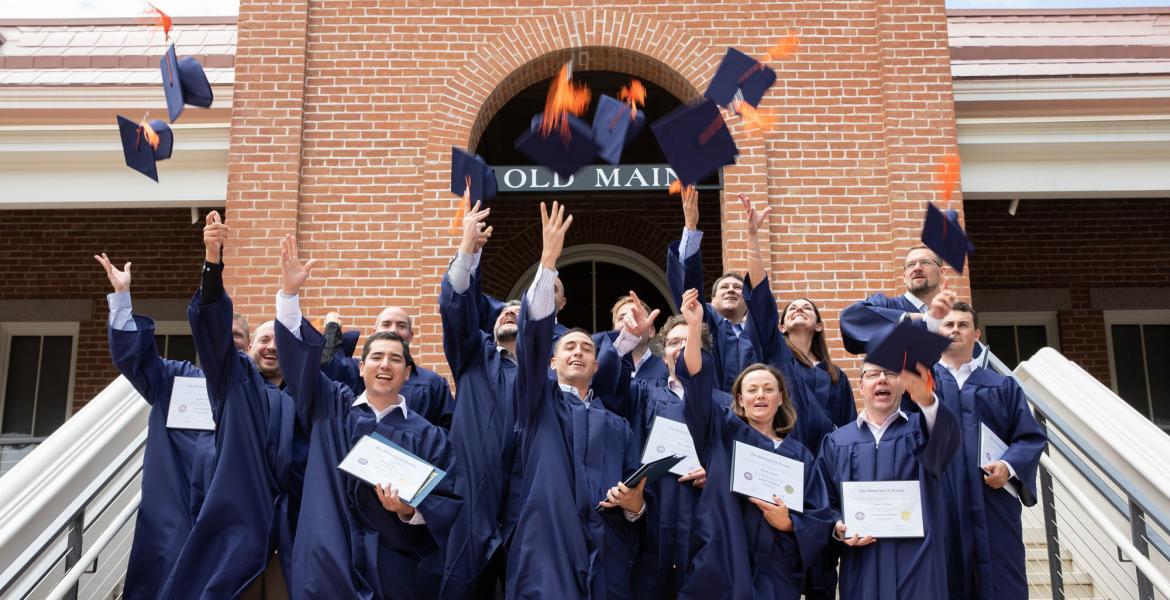 Caterpillar graduates of the UA Mining 360 Program celebrate in traditional style on the steps of Old Main on the UA campus. (Photo: Martha Lochert)

By
Emily Dieckman
Time to read
3 minutes
Print
a- a+
Read so far
A second cohort graduates from UA and Caterpillar’s Mining 360 Program, after a year of online classes, visits to mines all over the country and a summer capstone project.

That’s how Jean Savage, vice president of Caterpillar Surface Mining & Technology, summed up Mining 360, a nine-unit certificate program jointly sponsored by Caterpillar and the University of Arizona’s Department of Mining and Geological Engineering, or MGE. The second cohort of the program graduated in early August, at a ceremony that was full of new knowledge and sprinkled with the kinds of inside jokes classmates develop after a year of pursuing the same goal together. Mining was one of the two original majors offered by UA, so it was fitting that the ceremony was held in Old Main -- the very first building constructed on the UA campus.

Savage was joined by other honored guests, including Jeffrey Goldberg, UA acting provost and former dean of the College of Engineering. He described the certificate, formally known as “Fundamentals of Mine Operations and Economics,” as designed to teach new skills to employees who already stand out as leaders, managers and engineers, giving both employees and the company a competitive edge.

This year’s cohort of 16 students, representing six countries, took a year of online courses and participated in four in-person rotations to visit mine sites all over North America. Twelve UA faculty members from MGE, geosciences and law lent their expertise. In the fall, this cohort focused on all aspects of mining, from geology and mining planning to extractive metallurgy. The spring included special topics like mine economics; equipment operations; mining law; and a “Future of Mining” series in sustainability, renewable energies, big data, mine automation and minerals markets. The summer was spent working on a capstone project -- a hands-on experience on a real mine or design feasibility project.

“The students act as consultants to provide an actual engineering solution to an important project the mine is facing,” said Rosa Maria Rojas, lead professor of the Mining 360 program and assistant professor of practice in MGE.

I’m 100 percent sure I can use pretty much everything I learned here in my day-to-day work. I would do it again in a heartbeat.”

The students divided into two teams for their capstone project, both of which were tasked with providing Freeport-McMoRan’s Sierrita Mine a mine scheduling recommendation that would yield the greatest return on investment. Using many, many lines of a spreadsheet, the wisdom of industry guest speakers and MGE faculty members, and a lot of teamwork, both teams came up with similar mine plans. Christopher Fiedler, a senior mine engineer at the mine and a UA MGE alumnus himself, said their input was valuable, and that he was pleased with the results.

“We like to say we have put diversity and inclusion to the test here,” said Mining 360 student Roberto Olivera, a site performance manager for Caterpillar based in Lima, Peru. “Our team had six time zones, five countries, eight cities and seven languages represented.”

The graduates balanced coursework and commutes to mines across North America with their full-time jobs and other life changes -- including having children, moving and, for Marcos Drumond, even receiving his United States citizenship.

“I’m 100 percent sure I can use pretty much everything I learned here in my day-to-day work,” said Drumond, a sales manager for Caterpillar in Tucson. “I would do it again in a heartbeat.”

After presenting their capstone projects, the students donned caps and gowns, and several people took the stage to speak, including Juan Ciscomani, the senior advisor for Regional and International Affairs in the office of the Arizona governor.

“We’re looking forward to your contributions to the industry now that you can speak the language of mining engineers,” Rojas told them.