Building a Monument to Resilience

By
Jill Goetz
Time to read
2 minutes
Print
a- a+
Read so far
Construction of One World Trade Center is ‘what America is all about,’ says Yoram Eilon at a special UA College of Engineering Homecoming event.

Like the iconic skyscraper he designed, structural engineer Yoram Eilon is tall and slender, and more prone to outward reflection than personal disclosure.

But at a recent University of Arizona 2014 Homecoming celebration, Eilon, one of the key engineers behind the One World Trade Center, openly shared his experiences working on the project. The building, which sits on the site of the Sept. 11, 2001 terrorist attacks, symbolizes for him the ideals of the effort. He is from Israel; the partner in charge of the project is from Iran.

“As engineers, we focus on the end users. But in the case of One World Trade Center, we were very sensitive to the circumstances of the project and keenly aware of what it represents -- not just for our clients, but for the world,” said Eilon, senior vice president for building structures at the international engineering consulting firm WSP.

“If I could go back and change anything, it would be only this: the circumstances under which we were awarded this project.”

Eilon, who was at the site two days after airplanes struck down the Twin Towers, spoke to some 100 UA College of Engineering alumni, students and faculty on Nov. 7 at a special Centennial Lecture organized by the department of civil engineering and engineering mechanics.

“It was very emotional and elicited vivid images of what had disappeared,” he said.

One World Trade Center, sometimes called the Freedom Tower, opened in lower Manhattan on Nov. 3, 2014, just days before Eilon visited the UA. Well over half of its space has already been leased. With 105 floors, and a spire topping out at 1,776 feet, a nod to the signing of the Declaration of Independence in 1776, it is the tallest of the four new buildings planned for ground zero, and the tallest building in the nation.

Built on a similar footprint measuring 200 by 200 feet and just a stone’s throw from the original Twin Towers, the new building was completed in eight years and embodies numerous new technologies.

It is composed of a hybrid structural system, with a reinforced concrete core and a steel frame around the perimeter. Its uniquely formulated concrete mix is the strongest in New York City, with a compressive strength of 14,000 pounds per square inch. (Before 9/11, Manhattan skyscrapers typically used concrete of 8,000 to 12,000 psi.)

The building is also a model of sustainability. Much of its concrete was made from local and recycled materials, which helped earn it a LEED Gold Rating from the U.S. Green Building Council.

Among the building’s many security measures are super-protected stairwells and a 50-foot-high lobby, unparalleled redundancies to maximize protection, features to withstand extreme wind and seismic loads, and exterior barriers preventing most vehicles from approaching.

Aesthetics and comfort were also important considerations in designing the building, which has exterior steel beams that allow substantial light to permeate the interior.

“We didn’t want the building to feel like a fortress,” Eilon said. “We wanted workers to have a space where they could feel safe and be productive.”

The building includes half a million square feet of subterranean space that is filling up with train service, offices, storage, retail and other functions. And the site includes a museum and reflecting pool ringed with the names of the more than 3,000 victims of 9/11.

A New Kind of Challenge

One World Trade Center, with its unyielding symbolism, is an impressive milestone. For many Americans, its completion is about reclaiming the New York skyline and looking forward. For the engineers working on the building, looking forward took on new meaning.

The massive project required collaboration among dozens of consultants in engineering design and construction firms, architectural firms, governmental agencies (the Port Authority of New York owns the building), law enforcement agencies and other entities. So challenges were inevitable.

“We had to adhere to so many building codes: New York City codes, local codes and codes that we had to anticipate, because they were not yet written,” Eilon said. “When we started, there weren’t codes in place to address the particular issues of building integrity we were dealing with.” 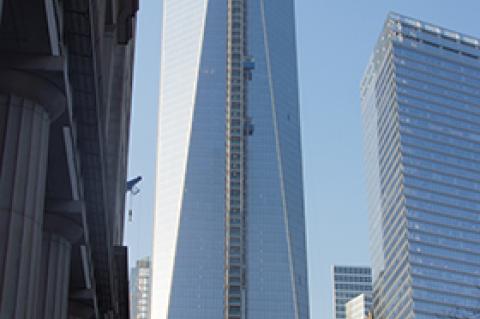