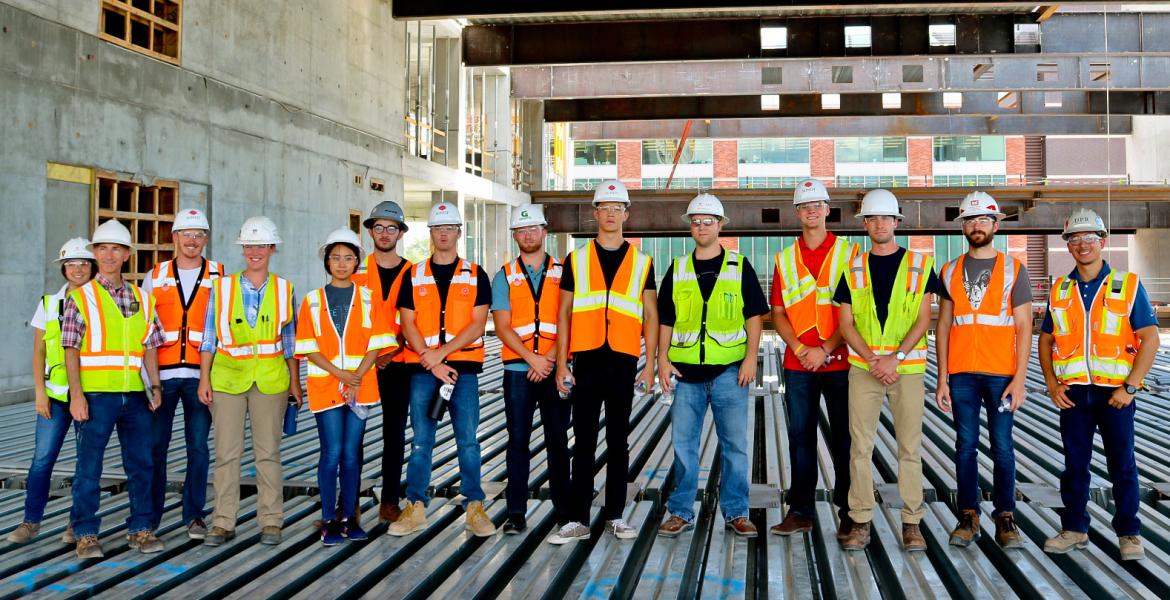 Construction engineering management class photo from 2017, taken at the UA Health Sciences Innovation Building on a site visit with the builder, Kitchell.

Building Bridges Between Students and Industry

By
Emily Dieckman
Time to read
3 minutes
Print
a- a+
Read so far
Construction engineering management program primes students for jobs in construction.

On his first day as an employee at construction firm Hensel Phelps, Isaac Gilles’ boss wanted to explain some basics of scheduling to him. Gilles was already familiar with scheduling, so the debrief wound up being more like a conversation.

“He was stunned that I knew what that was,” said Gilles, a 2015 alumnus of the UA Department of Civil and Architectural Engineering and Mechanics, or CAEM. “That was a really cool moment,”

Gilles was part of a group of students who took one of the earliest construction engineering management courses offered at the University of Arizona. The undergraduate discipline focus came about in 2012 in response to feedback from local construction companies, such as Sundt Construction, Ashton Contractors and Engineers, KE&G Construction, Granite Construction and AECOM -- then URS Corporation: They loved hiring smart UA engineering graduates, who were critical thinkers and fast learners. But they wanted their new hires to have more experience in construction specialties like project safety, bidding and estimating, and scheduling. A number of companies and some alumni funded a new course to equip students with these skills.

Kevin Lansey, the department head at the time, hired Dean Papajohn, a civil engineering manager for the Pima County Department of Transportation, to teach the first course in construction engineering management as an adjunct professor.

“I like the idea of industry-academia partnerships, and I know that when I was a student I was very hungry to know what real life in engineering and construction was like,” said Papajohn, who was hired as an associate professor of practice in 2015. “I’m sure there are students today who feel the same way, and I thought I could help close that gap.”

“The classes were phenomenal,” Gilles said. “Very practical. Papajohn took us on plenty of construction site visits where we could see different phases of construction. That’s actually how I met my first contact at Hensel Phelps.”

Learning the Logic of ‘Why’

Amy White, a 2018 graduate and former president of the Engineering Student Council at the UA, said the program’s practicality has helped her succeed in her first job as a field engineer for Sundt, another construction company based in Tucson, Arizona.

“The classes apply directly to the kind of problems and tasks that you’ll be asked to tackle as a young engineer, or even as a senior engineer,” she said. “Students that graduated before had never seen the process or the logic of the decisions being made in construction, but now the construction classes in particular are all so practically based. This program teaches you the ‘why’.”

Students aren’t the only ones benefitting from an opportunity to gain real-world experience before graduation. Sundt is among the companies that have been connected to the program since day one, and it has stayed involved in more than just a financial sense: Company employees host site visits, speak in classes and offer career advising to students.

“We get to come in and identify the top talent,” said Travis McCarthy, vice president and operations manager of Sundt’s transportation group. “We also get to discuss the aspects of construction in a sense that will make students more knowledgeable upon their graduation.”

The original cohort of construction companies involved with the program also suggested students get more involved in design-build clubs and conferences. Papajohn has overseen the start of a UA chapter of Associated General Contractors and of the Design-Build Institute of America. He also took a group of students to the 50-school, 1400-student Associated Schools of Construction competition for the first time in 2018. Students have one day to create a proposal for a construction project, helping them practice their presentation skills and get used to working under pressure.

“It was so good to get real-world experience for what we’ll be doing in the future,” said Hayden Young, an architectural engineering sophomore who attended the 2019 conference.

Young is also doing a summer internship at Sundt, thanks to Papajohn connecting her with White as part of one of the program’s newest initiatives. The Rise Together Mentorship, which kicked off in December 2018, provides industry mentors for women in the CAEM department.