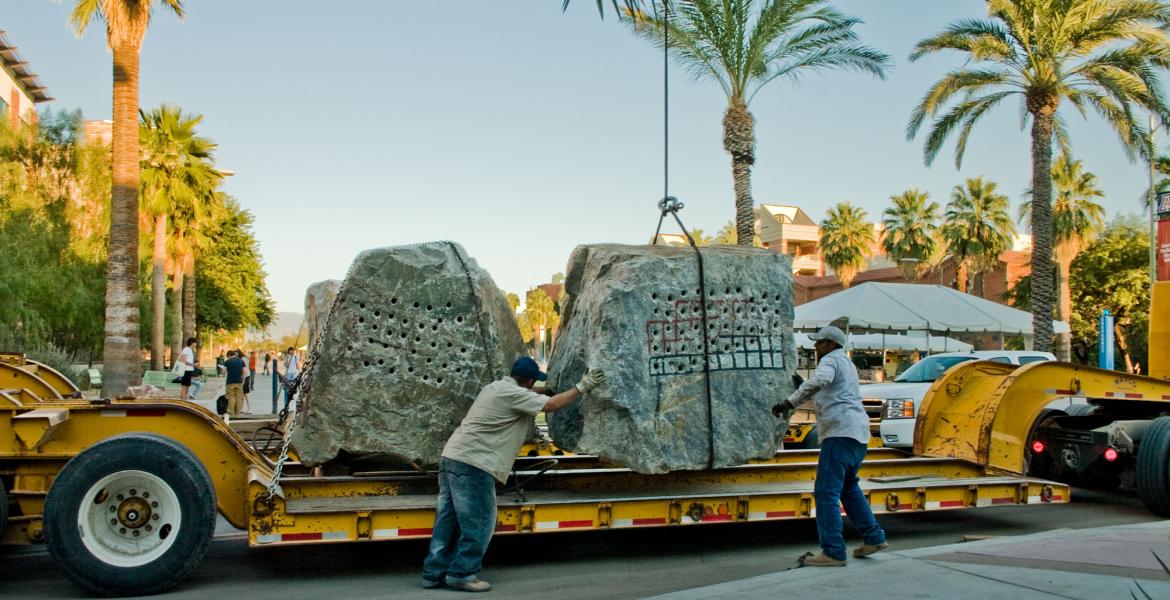 A crane crew replaces the giant rocks outside Old Main. The rocks are peppered with practice drill holes made by mining engineering students, one of the groups being targeted by the program because it has disproportionately low numbers of minority students.

Broadening the Geosciences in Southern Arizona

By
Pete Brown
Time to read
2 minutes
Print
a- a+
Read so far
NSF award will fund outreach program to encourage students to pursue education in the geosciences.

The National Science Foundation has awarded $155,000 to a group of engineers and geoscientists to launch an outreach program designed to increase the number of underrepresented students seeking geoscience-related degrees at UA.

The Saguaro program officially commenced on Sept. 1, 2009. Saguaro is an acronym for the Southern Arizona Geosciences Union for Academics, Research, and Outreach.

Much of the NSF funding will go to attracting and training minority undergraduate interns to conduct outreach at Tucson high schools and community colleges about geoscience careers and degrees. To reach minority high school students, Saguaro has formed a partnership with the UA Mathematics, Engineering, Science Achievement, or MESA, program, which already has a well-developed network of program coordinators and school advisors.

In addition to outreach conducted by trained undergraduate interns, the Saguaro support network will also include geoscience faculty and graduate student mentors. Sternberg hopes to attract many different departments into the program. “The door is open to all departments,” Sternberg said.

Saguaro will seek involvement from departments involved in, for example, mining and geological engineering, agriculture, geosciences, soil, environment, and hydrology. “Departments that have anything to do with the ground and what’s under it,” Sternberg said.

Few students from underrepresented groups get undergraduate degrees in science, technology, engineering and math, the so-called STEM fields, and the situation is particularly bad in the geosciences. In this area, less than 6 percent of the bachelor’s degrees awarded go to African Americans, Hispanics, Native Americans, and Native Pacific Islanders.

This small percentage is lower than the ratios of these groups both in colleges and in the general population. Similarly, many universities have difficulty recruiting local students from within their surrounding communities.

One part of increasing involvement, said Stokes, requires the tearing down of a few stereotypes and misconceptions. “Kids often perceive geosciences as boring,” he said. Going on fun field trips will be a part of the Saguaro program. In the successful OEDG program in Buffalo, Stokes took students fossil hunting at Niagara Falls, where they could see rock stratigraphy, and quite literally see geology in action. “Keeping kids in the class room and giving them a rock identification kit is not the answer,” he said.

The NSF reviewed Stokes’ role in the successful program in Buffalo and realized he was in a good position to replicate that success in Arizona. “His previous role in the Buffalo Geoscience Program would appear to make him highly qualified to undertake this task,” stated the NSF in its analysis of the proposal. “The remainder of the project team has excellent credentials and relevant expertise that makes project success very likely.”

In 2008, Stokes presented a paper on the proposed program at the Joint Annual Meeting of the Geological Society of America. That paper -- Spreading Roots: The Goals and Challenges of Establishing a Self-Sustaining Diversity Program in Southern Arizona -- won best student paper award in the geology and society division, and paved the way for the launch of Saguaro.