Breakthrough in Retinal Implants Expected to Restore Sight to the Blind

By
Pete Brown
Time to read
5 minutes
Print
a- a+
Read so far
Retinal implants have not lived up to their potential, argues a joint UA-German research team, until now. 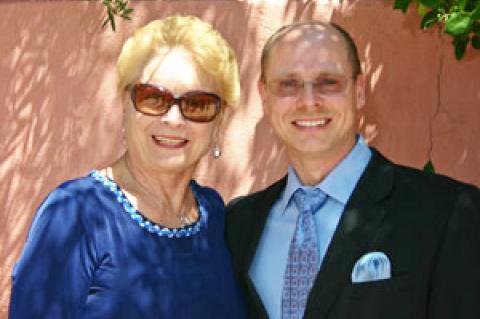 Maria Keonjian and Wolfgang Fink at the 2009 reception in Tucson, Ariz., announcing Fink as the first holder of the Edward and Maria Keonjian endowed chair in microelectronics. (Photo: UA Engineering.)

Researchers at the University of Arizona and University of Tübingen have made a breakthrough in retinal implant technology that could help people who have lost their sight see more than just light and vague shapes.

Wolfgang Fink, an associate professor in the UA departments of electrical and computer engineering and biomedical engineering, is researching new implant design and methods of electrical stimulation of the retina that will enable implants to produce much clearer images.

Fink conducted the research jointly with Erich Schmid, professor emeritus of theoretical atomic and nuclear physics at the University of Tübingen, Germany. Fink will present the team’s findings in San Diego during the Nov. 6-8, 2013 IEEE International Conference on Neural Engineering, organized by the Engineering in Medicine & Biology Society.

Only a handful of companies and research institutions worldwide are developing retinal implants, which stimulate surviving retinal cells in people who have lost their sight due to common degenerative diseases such as macular degeneration and retinitis pigmentosa. Implant patients can usually detect the presence of light, but the images they perceive are very low resolution. 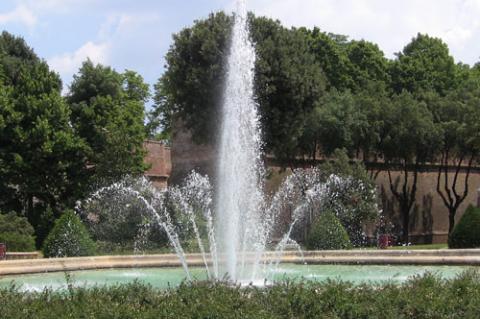 Fink and Schmid have developed a method whereby electrical fields from auxiliary electrodes on a retinal implant chip can shape a central stimulating field and give it more precise focus. (Photo: Francesco Raimondi Cominesi.)

"Current technologies and methods are far behind what can be done," said Fink, who is working with Tech Launch Arizona to patent the new technology and license it to retinal implant developers.

The conference presentations -- "Simultaneous vs. Sequential and Unipolar vs. Multipolar Stimulation in Retinal Prostheses" and "Electric Stimulation of Neurons and Neural Networks in Retinal Prostheses" -- will reflect the team’s view that implants on the market don’t work, and will propose new methods for achieving higher resolution images so implant patients can see in greater detail.

The low-level visual acuity currently achievable, Fink said, enables implant patients to make out white stripes on a black computer screen, or to distinguish between white objects such as a cup and a plate on a black background in a darkened room. "But only if the patients are told in advance that they are to choose between a cup and a plate," Fink said.

The level of restored vision the research team thinks is achievable, using its discoveries, is for an implant patient to be able to make out a bird flying in the sky. To accomplish that level of detail, the team’s novel method of electrical stimulation uses microsecond pulses, on-chip counter-electrodes, and controlled firing of electrodes to shape the electrical field.

The Technology of Retinal Implants

Retinal implants consist of an array of electrodes that are activated -- either by light entering the eye or by a signal from a camera mounted outside the eye -- to emit electric fields, which in turn stimulate retinal cells that send signals to the brain.

In an attempt to achieve greater resolution, some companies are developing implants with more densely packed electrodes while maintaining the array's same small footprint. Just adding more electrodes, however, is not the answer, Fink said, stressing that without the stimulation methodology he and Schmid propose, the vision achievable with hundreds or even thousands of electrodes would be no better than that achieved using tens of electrodes.

"Stimulation methodology is what achieves the improved vision, not electrode density," Fink said.

One problem with current implants, Fink explained, is that the return electrode, or counter-electrode, is too far from the electrode array, or chip, often somewhere within the patient’s head. This configuration does not allow fine-tuned stimulation of retinal cells that are just microns above the chip.

The research team’s solution is to use electrodes on the chip as return electrodes, so the electrical stimulation can be more focused.

It’s easy, but erroneous, to visualize a one-to-one relationship between the electrodes on a chip and the retinal cells they stimulate to form a pixel. An electrode cannot emit an electric field with laser-like focus -- the laws of physics dictate otherwise. In reality, each electrode, when firing alone, emits a hemispherical field that stimulates all retinal cells in its vicinity. When all the electrodes on an array are fired up simultaneously, the fields bunch together but never overlap, again due to physics. However, the shape of the electrical field can be controlled by selectively firing the electrodes in specific patterns.

For example, an electrode’s stimulating field can be shaped by fields from adjacent electrodes into what the team calls a “fountain” -- a tall, focused electric field that pushes upward directly into a localized region of the retina and then cascades down, fountain-like, to the return electrodes on the chip.

Unlike the technology developed by Fink and Schmid, current retinal implants rely on longer pulses, typically measured in milliseconds, and a single distant counter-electrode. They also lack the firing-sequence control that enables fields to be shaped.

“If you look at the electrode array in the cup and plate scenario, only a few electrodes of the entire array are firing and stimulating the retina -- all the other electrodes are quiescent,” Schmid said. “This is why current implants appear to work well.”

Conversely, Schmid said, being able to see a bird flying -- a small, dark shape traversing an expanse of blue and white -- is a highly complex task for a retinal implant. And it’s a negative of the cup and plate scenario: Every single electrode is firing except for those tracking the bird.

“With every electrode firing simultaneously, the fields are forced into very thin, almost parallel electric field lines. There is so much bunching going on that no electric current can leave the chip. You’re basically strangling the stimulation being emitted from the chip,” said Schmid, likening the effect to squeezing around the middle of a bunch of straws.

In the artificial vision generated by the implant, that bird is represented by non-firing electrodes. However, the absence of an electrical field above those electrodes leaves a vacuum into which adjacent fields readily enter, thus obliterating the image of the bird. The team’s novel field-shaping and neural stimulation methods would allow the bird to be perceived.

Taken in its wider context, Fink and Schmid’s research is about neural stimulation. “We believe this same methodology could work for all forms of neural stimulation,” said Fink. “It could be applied to paralysis, deep brain stimulation, things like that. There are definitely some cool ideas to explore that go way beyond vision.”

Wolfgang Fink is an associate professor in the UA department of electrical and computer engineering, where he is the founding director of the Visual and Autonomous Exploration Systems Research Laboratory, and the inaugural holder of the Edward and Maria Keonjian Endowed Chair. He holds joint appointments in the departments of biomedical engineering, systems and industrial engineering, aerospace and mechanical engineering, and ophthalmology and vision science.

In 2012 he was elected to the College of Fellows of the American Institute for Medical and Biological Engineering for his outstanding contributions in the field of ophthalmology and vision sciences with particular focus on diagnostics and artificial vision systems.

The U.S. Department of Energy and the National Science Foundation have funded Fink’s research into artificial vision, and his research contribution to the DOE Artificial Retina project involved developing a real-time image-processing system, determining the most effective electric stimulation patterns (awarded two patents to date), and designing a robotic surrogate for patients with a vision implant. In 2009, the DOE Artificial Retina project won R&D Magazine’s R&D 100 Award and the Editors’ Choice Award as one of the top three of the 100 award winners that year.