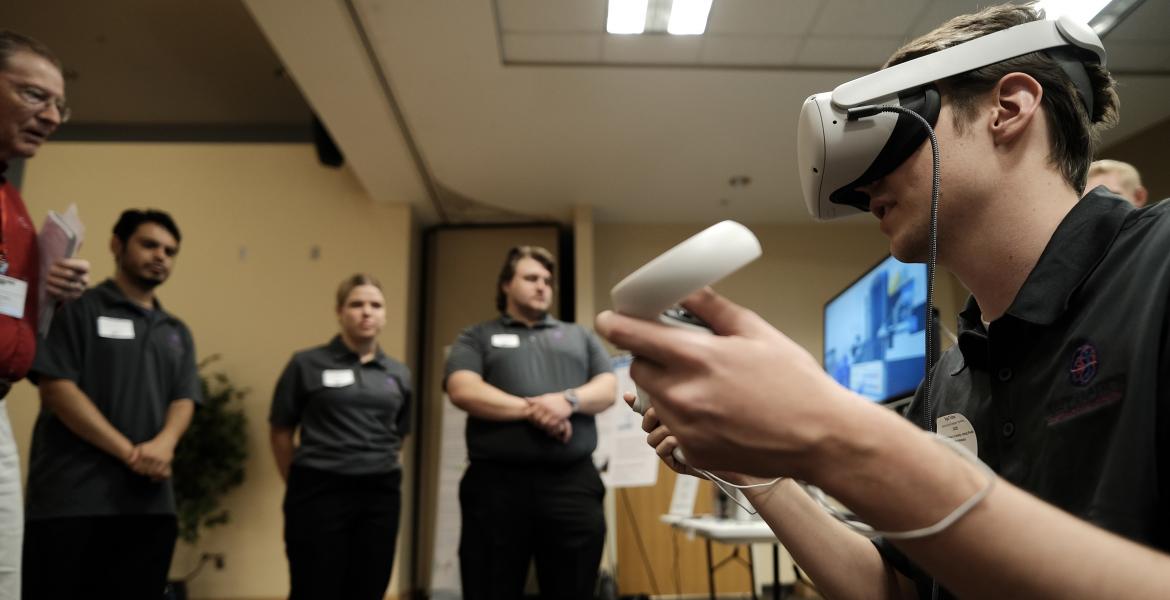 A team of students demonstrates their virtual reality and opti-robotics project, sponsored by Airy Optics, at Craig M. Berge Design Day 2022. The team won three prizes and took home a total of $4,000.

Back with a (Flash)bang: Craig M. Berge Engineering Design Day 2022

By
Emily Dieckman
Time to read
8 minutes
Print
a- a+
Read so far
Engineering students competed for more than $46,000 in prizes at the first in-person Engineering Design Day since 2019, with projects ranging from a battery-powered flashbang alternative to mealworm protein bars.

In an engineering education, students learn to befriend discomfort, whether it comes from eating bugs, facing public speaking or confronting failure.

At the University of Arizona College of Engineering's Craig M. Berge Design Day 2022, students got to celebrate the sense of accomplishment that often comes on the other side of discomfort, as the college celebrated coming together in person after two years of Design Days held virtually due to the pandemic.

Design Day – named for Craig M. Berge, a College of Engineering alumnus and longtime supporter of the college who passed in 2017 – is an annual opportunity for engineering seniors to present the results of their yearlong projects to the public and hundreds of judges. This year, 97 teams of students, who completed projects requested by industry and university sponsors, competed for $46,250 in prizes.

"I talk a lot about grand challenges in society around food and water, energy, health care and security, and what I saw today are a number of great projects that convinced me that we are in good shape, moving forward, to tackle those problems," David W. Hahn, the Craig M. Berge Dean of the College of Engineering, said following Tuesday's Design Day. "When you talk about solving problems, it comes down to one key word: design. Engineers design solutions to problems. Today, we come together to celebrate the culmination of a lot of hard work."

One team – Team 22030 – took home the $7,500 Craig M. Berge Dean's Award for Most Outstanding Project, for their Blinding Resonant Incapacitating Throwable Emitter, or BRITE. Traditional flashbang grenades emit a bright light and loud sound to disorient an assailant, but can also be potentially harmful to the person using it. The team developed a battery-powered, reusable alternative designed to be safe for the user.

The team members created three full prototypes of the device and several dozen prototypes of individual parts. One of the keys to their success, they believe, is that they started early and reiterated often.

"Most of the products sitting on this table did not work," said optical sciences and engineering major Alex St Peter, gesturing to an array of 3D-printed parts. "Did we fail? Totally. But we failed really early, so we were able to correct that."

The students were drawn to the project for its many components, and for its application in fields like defense and law enforcement.

"You could give this to law enforcement and it could be usable. It's something that sparked my eye, and I can see it in the real world," said team lead Jeston Rusnak, a mechanical engineering major. "This is my first time leading a team on a large scale, especially in an engineering capacity. Being surrounded by a bunch of smart people all the time, I have to be on top of my game."

If at First You Don't Succeed...

Another team spent Design Day serving up free samples of protein bars with a special ingredient: mealworms. The idea of eating insects is rising in popularity as some experts project the global population will soon outpace our ability to produce traditional sources of food. Insects require less water, land and food than traditional livestock, and the entirety of an insect can be eaten, compared with 50% or less of an animal like a cow.

"We figured if we put something in a protein bar, it would be more accepted by people, rather than giving them a mealworm steak," said chemical engineering major Collin Patrick Quenelle. "We were able to get 23% of the protein out of the mealworm."

"We only got 4% the first time," added his teammate and fellow chemical engineering major Brett Aiden Cernich, noting the team's progress through the year.

Drones were another popular subject. One team created a low-cost drone tracker that uses visible light to detect drones, which are often too small to show up on radar.

"We learned a lot of stuff that we weren't taught in classes, because they can't teach it in classes, because you have to learn through experience," said electrical and computer engineering team member Brad Zimmermann. "We all, at some point, had to work on something that wasn't our strength."

Jason Licamele, a discovery and optimization lead at global agriculture company Bayer Crop Science – one of several sponsor companies for Design Day – said about 60% of the employees at Bayer's Marana offices are UArizona graduates. Licamele, who earned a doctorate in agricultural and biosystems engineering from UArizona in 2009, anticipates the company will sponsor more projects in the future.

"We look at the University of Arizona as a place for recruiting talent," said Licamele, who oversaw students' work to create an imaging system to detect crop stress. "They did a great job. And I'm so excited that it's in person again."

Paul Thompson, director of engineering at aerospace company Meggitt Tucson, has attended several Design Days to support Meggitt's interns. This year, he attended as both a judge and a project sponsor for a team that built a tool to apply a heater blanket to lithium battery cells.

"I was extremely impressed with the students' professionalism and presentation skills. I can tell you, I graduated in 2004, and they blew me away," said the aerospace engineering alumnus. "I think the university program is really training these students well for industry."

Students Look Ahead to Bright Futures

Many students learned skills over the course of their projects that set them up for success in their careers. Optical sciences and engineering major Avalon McLeod's team created a hyperspectral camera that won the $1,500 II-VI Aerospace & Defense Award for Best Optical Systems Design. She's heading to NASA's Jet Propulsion Laboratory this summer to work on another hyperspectral camera.

"They were definitely interested in me largely because of this project, including the experience I gained with nanofabrication," she said. "I will use my experience and expertise from this, definitely, in my career."

Biomedical engineering student Clara Mersiowsky said that while she learned a lot through the year, her favorite part of the process was Design Day itself.

Brian Faires, an electrical and computer engineering major whose team won the $1,500 Rincon Research Award for Best Presentation and the $1,000 Sharon ONeal Award for Best Integration, Verification and Validation for their project to create an electronic continuously variable transmission, echoed the sentiment: "There's nothing like getting to drive with a transmission you built."

Bly Family Award for Innovation in Energy Production, Supply or Use (First Prize) – $2,000

Bly Family Award for Innovation in Energy Production, Supply or Use (Second Prize) – $1,000

Andressen Award for Design Above and Beyond – $1,500

Team 22026: A Real-Time Vegetation Stress Detection System on a Drone

Team 22021: Optimal Valve Diaphragm and Membrane Design for Use in Medical Catheters

Garmin Award for Best Use of Wireless Technology – $1,000

The Mensch Foundation Award for Best Use of Embedded Intelligence – $1,000

Team 22026: A Real-Time Vegetation Stress Detection on a Drone

Team 22026: A Real-Time Vegetation Stress Detection on a Drone

Ergo Dave Award for Best Use of Human Factors Engineering – $500