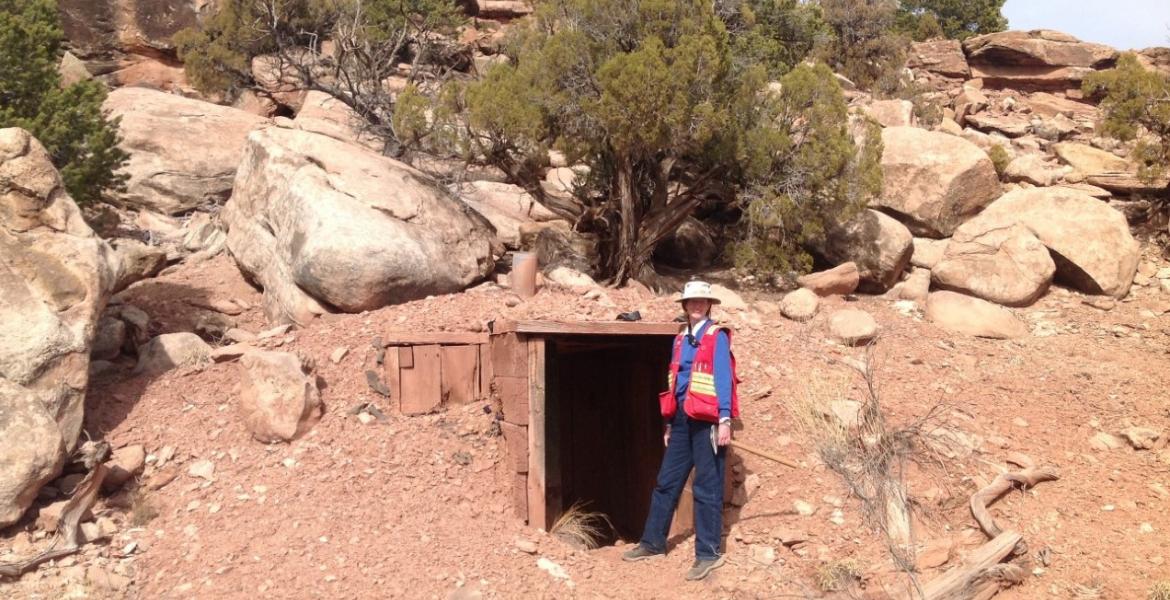 By
Emily Dieckman
Time to read
3 minutes
Print
a- a+
Read so far
In the field and in the classroom, NSF CAREER awardee Isabel Barton is bringing together people and ideas from multiple industry specialties, academic disciplines and demographic backgrounds to lend everyday understanding to mining sustainability.

Anyone who’s seen an old cartoon or film about mining knows the image of a sooty man making his way through a dark tunnel. When his lantern lights upon a brilliant diamond or a hunk of gold, he hacks away at the rock until the precious mineral is free. It’s that simple.

In today’s world, it’s a lot more complicated than that. Minerals hosting important metals like cobalt, copper, uranium and vanadium are thoroughly embedded in less valuable rock, and extracting the metals requires knowing the properties of the minerals and surrounding rock, as well as a long list of tools and processes. As the world moves toward sustainable technologies ranging from solar panels and windmills to electric vehicles, mining the material to build these technologies is more important than ever.

“If you look at the course of green energy, every time you eliminate fossil fuels, that means you need more metal,” said Isabel Barton, assistant professor of mining and geological engineering. “But minerals are complicated. Minerals are messy. So, the extractive processes that should work great in theory sometimes fall down in real life.”

Barton received a 2021 National Science Foundation CAREER Award, the foundation’s most prestigious award in support of early-career faculty. The recognition comes with a $500,000 grant to support her research and outreach. She’s on a mission to make mining processes more efficient by breaking down silos between geologists, experts on ore deposits, and metallurgists, who know how to extract the metals from rock. Barton’s background in geometallurgy, which bridges the two fields, makes her the perfect candidate for the job.

Mine teams run tests to learn more about the ore’s properties before developing an extraction plan. However, there are a wide array of mineral properties they don’t examine in standard practice. For instance, when copper is extracted from common copper sulfide minerals in a process called leaching, extraction rates can change a lot based on subtle variations in the minerals’ crystal structure and chemical composition. However, detecting small-scale structural features and impurities requires relatively sophisticated testing that isn’t part of the usual lineup of tests done on the ore. Thus, scientists only check the level of such impurities if something unexpected happens during extraction.

“Let’s say you move into a different zone, and, all of a sudden, your recovery – or the percentage of valuable metal successfully extracted from the ore – drops like a rock, so to speak,” Barton said. “In cases like that, a lot of companies embark on an intensive characterization campaign to figure out what changed caused that drop in recovery.”

Barton is looking beyond the narrow range of mineral properties typically examined to establish a more proactive approach to extraction. She plans to apply detailed characterization methods to quantify all the relevant ore properties, then link them to leaching results with a series of experiments.

“If the results indicate that things like crystallinity are important in determining extraction behavior, we could add them to the routine battery of analyses and point the industry in a more efficient direction,” she said.

Though Barton’s research will be focused on the Colorado Plateau, she hopes the methods she is developing will be used worldwide to improve mining operations.

“I am confident Dr. Barton’s research will bring about a paradigm shift in the production of critical minerals needed for a green economy,” said Moe Momayez, the David and Edith Lowell Chair in Mining and Geological Engineering and interim department head.

In their everyday lives, people are tremendously reliant on mining, but often they are not aware of the many ways in which they depend on mineral resources. Barton intends to change that.

She teaches an undergraduate course cross-listed in mining and anthropology that explores nonrenewable resources through a historical lens. Discussion ranges from the role of bronze in ancient empire-building, and coal coking in medieval China, to minerals that can power green energy today and the future of space mining.

A huge portion of human history and the outlines of modern society have really been determined by the access, or lack of access, to mineral resources.

“A huge portion of human history and the outlines of modern society have really been determined by the access, or lack of access, to mineral resources,” Barton said. “Putting together this course was an opportunity to showcase how much mineral resources have had to do with civilization as we know it.”

As part of her NSF work, Barton is creating a series of short, publicly accessible videos on the same topics. In doing so, she hopes to make the field – in which women and ethnic minorities are historically underrepresented – more welcoming and more interesting to all.

“Mining engineering has a chronic diversity problem,” she said. “Though my own experiences have been largely positive thanks to my supportive colleagues, I understand how it can sometimes feel like a foreign or unfriendly environment. This motivates me to really make sure that students from all different backgrounds have an opportunity to pursue careers in mineral resources.”