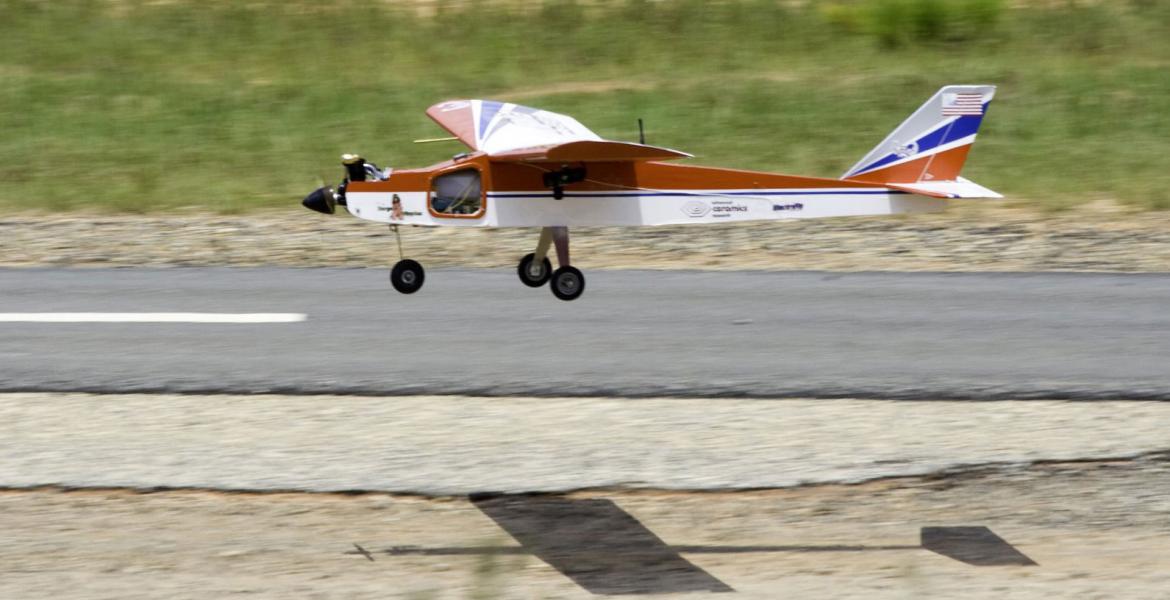 By
Pete Brown
Time to read
3 minutes
Print
a- a+
Read so far
The organizers bill the competition as "the ultimate challenge" -- the UA's student team of builders of autonomous aircraft was undaunted.

The UA Aerial Robotics Club (ARC) was awarded $1,200 prize money Aug. 1 at the 2008 International Aerial Robotics Competition (IARC) awards banquet in Fort Benning, Ga. The team will use the award to cover the cost of entering next year’s competition.

Although the UA team did not get the chance to demonstrate the full range of its system’s capabilities, it is looking forward to next year’s competition. “We still had a great time at the event and we gained a lot of valuable experience from it,” said a team member on the ARC blog. “The team seems to be stronger than ever and we are all incredibly excited about next year’s event."

It was confirmed at the awards banquet that next year’s IARC will be scaled down to an indoor competition. This will require the UA team to develop a completely new platform because its current air vehicles are not suitable for indoor flight.

Next year’s mission will be to autonomously navigate an aerial vehicle through the inside of a building and have it identify and maintain focus on a particular target.

A major challenge for the UA team leading up to next year’s competition will be securing funding to redesign its systems. The team’s current sponsors include Raytheon, Advanced Ceramics Research, Lockheed Martin, Cloud Cap Technology and TacGeo.

A team member explained: “The last few years have been relatively inexpensive for us as a club because we already had most of the expensive parts that we needed from previous years. Now that we have to scale down drastically, none of our existing electronics or airframes are suitable.”

The team thanked its sponsors on the ARC blog: “[We] want to thank everyone that helped support us this season … We still had a great year and learned a lot. This coming year will be the best one yet!”

The competition proved to be demanding for all the teams involved.

Many of the student teams completed individual stages of the competition, but combining all those stages into a single mission ultimately proved elusive. As this was the last year of this particular mission, the $80,000 prize money was awarded today based on individual team performance.

The UA plane's engine cut out during a flight, but it was brought back to earth with only minor damage. There is more to the competition than flying planes, however, and one UA team member commented: “We were at least able to demonstrate our awesome vision software to the judges during a test on the runway.”

Although UA was able to recover its aircraft, other teams were not so lucky.

The team from Embry-Riddle Aeronautical University spent an entire day rebuilding its helicopter, which crashed at the start of the second day. The team got it back into the air for a final attempt and it crashed again. A UA team member commented: “It was pretty bad to watch,” and added, “It’s hard to watch any of these aircraft go down knowing how much time and effort was put into designing and building them. Even though our system kept failing us, we are very relieved that it didn’t suffer any major damage.”

One of the teams from India was unable to find parts for its plane that was damaged during shipping. Team members bought a new plane at a hobby store in a nearby town, but it could not handle the extra weight of the autopilot system and was unable to get up into the air.

As expected, Georgia Tech came very close to completing the mission but could not deploy its rover into the target building.

The mission of competitors in the IARC, which is billed as “The Ultimate Collegiate Challenge,” is to build a completely autonomous (no pilot or remote control) aerial robot that can fly 3 kilometers into a city. The robot must then find a marked building and enter it or send in a probe, and then transmit pictures back to the starting point.

The UA team designed Wildcat 8 to reach the city and locate the target building. Wildcat 8 weighs 8 pounds, has a wingspan of 75 inches, a length of 48 inches and a flight time of 15 minutes at air speeds of up to 67 mph.

When Wildcat 8 locates the target building, it relays video and GPS data back to the starting point. This data is then programmed into the delta-winged Robotic Aerial Transport, or RAT, which then flies directly to the target building and enters it.

The RAT lands inside the building and delivers its payload, a two-wheeled autonomous robot called a rover, which navigates inside the building while transmitting video to the start point, where the judges can determine whether the rover has identified particular objects.

These various stages have been completed by some of the teams during previous years, but no team has completed them all at a single event. This is why the $10,000 annual prize has rolled over each year, and why the prize stood at $80,000.

The aerial robotics competition was started in 1990 by Georgia Tech professor Robert Michelson, and, having spent more than a million dollars on its massive unmanned helicopter, Georgia Tech is always the team to beat.

The UA Aerial Robotics Club, which first entered the competition in 2003, has about 30 officers and members from many engineering disciplines, including mechanical, aerospace, electrical and computer, and from a few other areas, such as studio arts, business and physiology, and optical sciences. Hermann Fasel, professor of aerospace and mechanical engineering at the UA College of Engineering, is the club’s advisor.