By
Karina Barrentine
Time to read
4 minutes
Print
a- a+
Read so far
Distinguished alumni, surprise announcements, and talks on sustainability take center stage for Homecoming 2013. 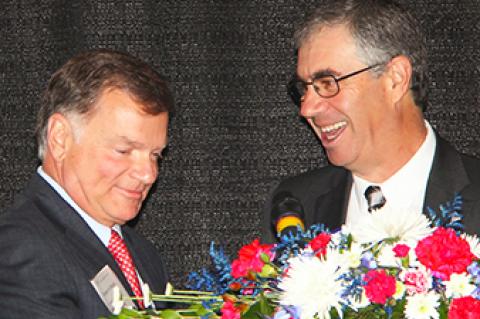 Greg Boyce receives an Alumni of the Year Award from College of Engineering Dean Jeff Goldberg.

Greg Boyce told about 500 alumni, faculty, and students at the 2013 Annual Engineers Breakfast on November 8 that when he arrived at the University in 1972 to pursue a BS in mining engineering, he had no way of knowing how the College of Engineering would shape his life, including a career spanning four decades that sent him around the world and back to the UA -- for an Alumnus of the Year Award.

“The world-class education I received at the University laid the foundations for countless professional and personal milestones,” said Boyce, Peabody Energy chairman and CEO, who serves on the UA Mining and Geological Engineering Advisory Council. “It has been my privilege to continue to support the University and its students.” 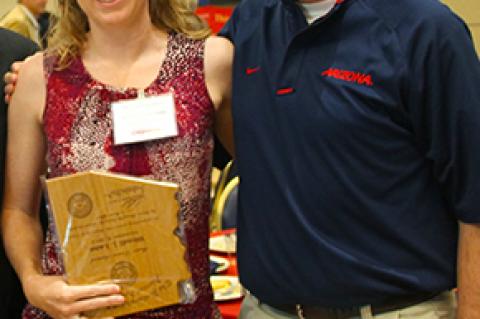 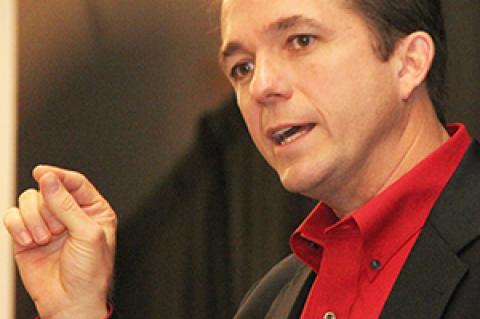 At the 2013 Engineers Breakfast, Jerry Hunter delivers a keynote address that puts data management into perspective.
omen in engineering.

Fusler Lane, who was recognized with the Bear Down Award, has helped the College launch an online engineering degree program for Intel employees and is involved in K-12 STEM education outreach. The Intel operations engineer is as committed today to helping the College compete for a diverse group of outstanding students as she was when she served as a founding member of the Engineering Ambassadors more than a decade ago, said College of Engineering Dean Jeff Goldberg.

McDuff (shown at right in photo at top of page) continues to engage and inspire College alumni from coast to coast but figured his days of winning awards were over. Not so, said Goldberg, who characterized McDuff, the 2013 Sidney S. Woods Alumni Service Award winner, as “one of the most altruistic people I know.”

Hunter, who earned his BS in 1988 and MS in 1990, spoke on “Big Data, Utility Computing, and Some Cool Problems.”  The talk focused largely on the capabilities of cloud computing and related technologies to support today’s intensive computing needs.

“These technologies have created a radical shift in the way we deal with data today,” he said.

In a surprise announcement at the Engineers Breakfast, Goldberg thanked the Thomas R. Brown Foundations for a $3 million donation to help seed the new Engineering Innovation Building.

Sara Brown Smallhouse, president of the Foundations and daughter of the late Tom Brown of Burr-Brown Corp., has said of the new building project, “We are going to have to carefully pick strategies that yield results, not just for the community but for the world. It is in our collective best interest for all of us to do what we can.”

The Engineering Innovation Building, for which groundbreaking is slated in late spring or early summer 2014, is being designed around critical areas of research -- advanced manufacturing, infrastructure, bioengineering, materials processing, metals recovery and recycling, computer modeling and recycling, and energy and energy storage.

Also during Homecoming festivities on November 8, College of Engineering faculty members participated in a two presentations as part of the UA Alumni Association’s Collegiate and Campus Showcase.

‘U.S. Mineral Mining: In Need of a Winning Hand’

One of the most fundamental challenges facing the world today is how to provide, in the most responsible and sustainable way, the materials and energy for a world population emerging from poverty into the middle class, said Mary Poulton, head of Mining and Geological Engineering and director of the J. David Lowell Institute for Mineral Resources, in her Showcase presentation.

“We are not the behemoth consuming all these resources,” said Poulton, as she explained that China, for example, is producing and consuming more of the world’s critical and important resources than the rest of the world put together.

However, in the United States, we are nearing a shortfall of rare earth minerals essential for our laptops, cell phones, wind turbines, and countless other technologies we depend on every day, partly because we are reliant on uncertain imports from other countries. The impending scarcity is not because most of the resources do not exist at home. Rather, it is because we have chosen not to develop our resources, said Poulton, citing social, political and economic roadblocks to getting the minerals out of the ground.

“Saying no to everything does not solve the problem,” she said.

In this natural lab called Arizona, the UA’s Lowell Institute for Mineral Resources is in a position to provide the leadership for development of sustainable mineral resources, Poulton said. From lowering water and energy use to creating renewable energy, from protecting the environment to keeping our communities and workforce safe, and from understanding global mining resources to keeping lawmakers informed, we have the expertise and partnerships with industry and government to help guide the nation.

‘Seeking Water from the Sun: The Quest for Clean Water; Where Are We Now?’

An Arizona Public Media Video that chronicled the plight of the Navajo Nation to get access to fresh water and featured the UA’s solar energy powered desalination system first aired on Earth Day April 2012. Now it may be time for a sequel as the University begins making plans to move the desalination plant out of the prototyping phase and onto the arid lands of the Navajo Nation.

Participants on a Showcase interdisciplinary panel said that the technology works and is proving to be cost effective as well as optimized for technology transfer to the Navajo Nation. Bob Arnold, a chemical and environmental engineering professor, noted that there are still some hurdles to overcome --finalizing solutions for dealing with salt brine extracted from the water, ensuring automation of the equipment, and protecting the system from very cold winter temperatures -- but said the team is looking forward to its first plant installation in northern Arizona.

Lacy Lecture: ‘The Inseparable Relationship Between the University of Arizona and the Global Mining Industry’

Starting with the first gold and copper discoveries in Arizona in the 1880s and moving through the first day at the UA School of Mines in 1891; the founding of the Geological Museum in 1919; the first female graduate, Blanche Elise Peggy Hightower in 1943; the start of the San Xavier mining laboratory in 1958; the first automated mining equipment in the 1990s; the establishment of the Lowell Institute of Mineral Resources in 2009; and the opportunities for students today, Douglas B. Silver had something for everyone during the Eighth Annual W.C. Lacy Distinguished Lecture.

Silver, board chair of the Lowell Institute for Mineral Resources, chronicled the history of mining in Arizona as he spoke about the alumni -- leaders, ore-finders, miners, and industry executives -- who have helped make UA mining and geological engineering what it is today: a top-ranked program.