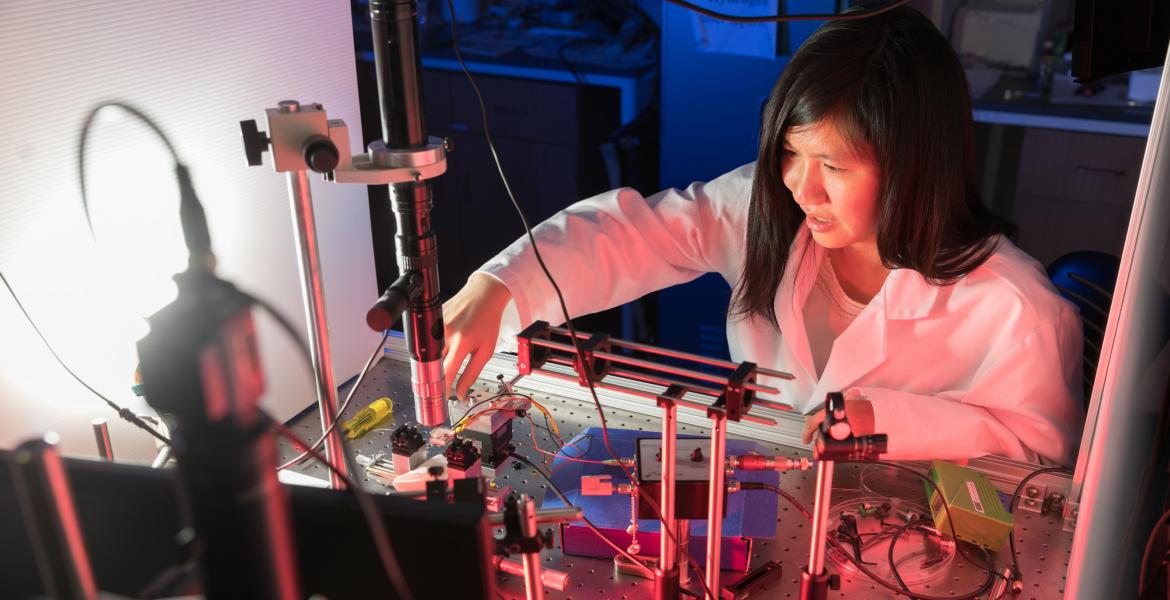 Judith Su, an assistant professor of biomedical engineering and optical sciences, runs the UArizona Little Sensor Lab, where researchers are finding ways to use a one-of-a-kind technology to address some of the medical community's most pressing problems. (Photo: Chris Richards / University of Arizona)

By
Emily Dieckman
Time to read
3 minutes
Print
a- a+
Read so far
A biomedical engineering professor's technology detects and distinguishes ultra-low levels of disease particles, performance-enhancing drugs, contaminants and "anything worth sensing."

In Judith Su's Little Sensor Lab, researchers are working to sense tiny amounts – down to a single molecule – of everything from doping agents to biomarkers for cancer, Alzheimer's disease, Lyme disease and, yes, even COVID-19.

"Everything our lab does is centered around ultrasensitive optical sensing, for a wide variety of applications, like environmental health monitoring, food and water quality monitoring, and detecting toxic industrial chemicals," Su said. "Anything worth sensing, we sense."

At the core of Su's lab is a one-of-a-kind technology called the frequency locked optical whispering evanescent resonator, or FLOWER, which takes advantage of a phenomenon called whispering gallery waves. The most famous examples of these waves come in the form of sound: Whisper something from one end of a room with specially rounded walls, such as at St Paul's Cathedral in London, and a friend at the other end of the room can make out what you are saying. In the case of St Paul's, that's a distance of more than 100 feet.

To detect substances down to the single molecule, FLOWER uses waves of light instead of sound, and at a much smaller scale of about 100 microns across – about the size of a grain of table salt. The setup consists of a toroid, or doughnut-shaped ring, through which light travels around and around. Each time the light makes a loop, a small amount extends out beyond the sensor and interacts with a solution – such as urine, blood, sweat or water. If the molecule under scrutiny, also known as the analyte, is present, even in small quantities, it changes the light's index of refraction very slightly. But, because the light interacts with the molecule so many times as it loops around the ring, the change becomes more noticeable, making FLOWER far more sensitive than many existing sensing methods.

In just 40 nanoseconds, the light travels around the toroid 240,000 times. This means it travels about 68 meters. FLOWER can determine whether an analyte is present in just 30 seconds.

FLOWER has several additional advantages over prevailing sensing methods. Many use fluorescent dyes or other chemicals to label the analyte and make it visible under a microscope. But the often expensive and difficult-to-produce labels can interfere with particularly small analytes.  Additionally, FLOWER's sensor is larger than others, so it casts a wider net to capture trace amounts of analytes.

COVID-19, Portable Detection and Beyond

FLOWER can be adapted for various substances and can be used to address some of the medical community's most pressing problems. For example, Su is collaborating with a group at the California Institute of Technology on a COVID-19 drug. The teams are searching for compounds that bind to a specific receptor in the lungs and protect against the virus.

"We're also starting a project to research olfaction, vapor and breath," Su said. "There are a lot of molecules in the air that could provide a noninvasive way to test for disease. Say, a breath test for COVID-19 instead of a swab or a blood test."

The funding also will help expand FLOWER's abilities. For one, Su's lab intends to increase the device's sensitivity to detect even smaller and more lightweight molecules. Additionally, the researchers are working toward adapting the device to detect not just the presence of a molecule, but also molecular abnormalities or changes in shape. As just one example, the device could help the researchers study light-activated proteins in the eye and increase scientific understanding of vision. The research team is even incorporating artificial intelligence so the system can continually improve itself.

Lastly, lab members are working to miniaturize the system so it's portable and easier to use. Su envisions a smartphone attachment that could allow soldiers to detect contaminants in water, paramedics to find trace amounts of disease, and citizen scientists to test air quality.

"The work of Dr. Su and her team is an incredible example of the increasing convergence of the digital, physical and biological worlds, and why the University of Arizona is primed to be a leader in driving the Fourth Industrial Revolution to create a bright future for us all," said University of Arizona President Robert C. Robbins. "With this support from the NIH, Dr. Su and team have a tremendous opportunity to develop a portable technology that could be a game changer in multiple arenas."