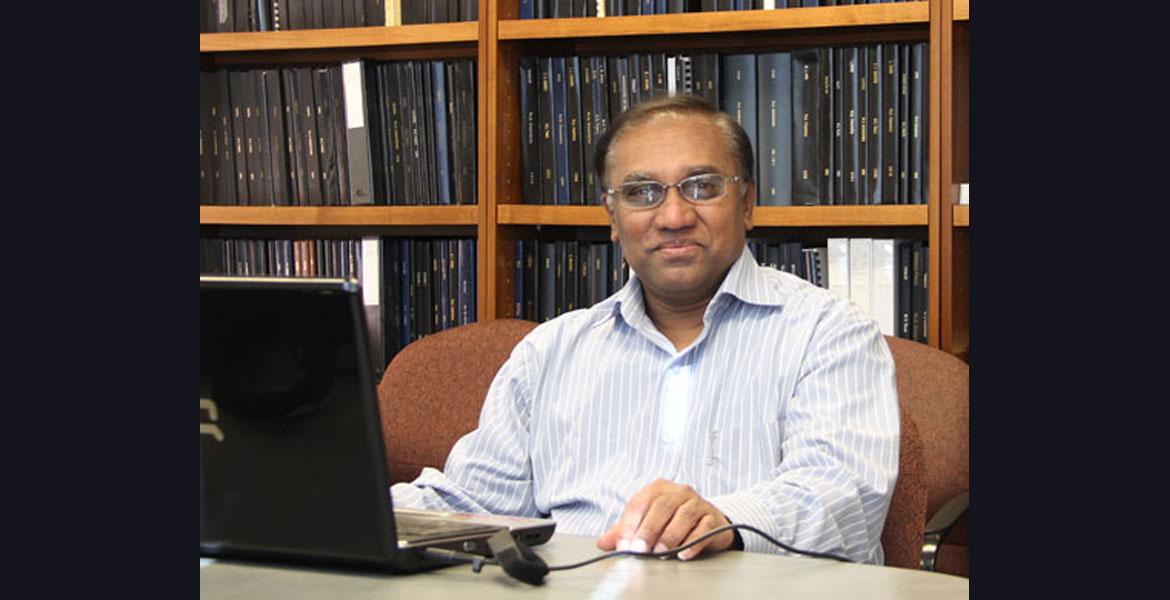 Pinnaduwa H. S. W. Kulatilake, professor of geological engineering, with an emphasis on rock mechanics and rock engineering, in the UA College of Engineering.

By
Pete Brown
Time to read
2 minutes
Print
a- a+
Read so far
A UA Engineering research program on new methods of determining rock strength could reduce hazardous working conditions that currently cause thousands of deaths every year in mining and construction.

A University of Arizona geotechnical engineer has been awarded $1.25 million to conduct research that could provide safer working conditions for miners and construction workers.

The true extent of mining fatalities globally is hard to gauge, but some estimates suggest that as many as 12,000 miners die every year in mine accidents. The primary cause of these fatalities is ground failure.

Ground failure is generally any significant movement of the ground, such as a landslide or underground excavation collapse, or when ground moves and flows like a liquid, which results when earthquakes or high water pressure cause soil to lose its strength.

Tunnel or underground cavern collapse and catastrophic failure of slopes, dams and foundations are examples of ground failure encountered in mining and civil engineering projects.

Part of the problem is that current methods of rock assessment are simply not up to the task of providing a detailed picture of what engineers are truly getting into when they start blasting and tunneling.

Pinnaduwa H. S. W. "Kumar" Kulatilake, professor of geological engineering in the UA College of Engineering, is the sole principal investigator for a five-year project to develop new methods of assessing ground stability. The National Institute for Occupational Safety and Health, which is part of the Centers for Disease Control and Prevention, is funding the research.

Ground stability depends on the strength and deformability of rock, which in turn depend on:

The relationships between these factors are complex and it is difficult to determine rock strength and deformability, and thus ground stability, using the analysis techniques and limited field and laboratory investigations that are currently available.

During the 5-year project, Kulatilake will extend rock strength criteria he has developed to make them applicable in three-dimensions. He will be working with two mines in the U.S. and two mines in China to apply his new methodologies to underground and surface excavations to check how well they work in the real world. China's official mining death toll in 2010 was 2,631. It is the world's largest coal producer and consumer, and employs 5.5 million coal miners.

Kulatilake points out that it is not only miners who will benefit from being able to evaluate rock masses for potentially hazardous working conditions. "This is not only for mining," he said. "This work also relates to civil rock engineering projects such as tunnels, caverns, foundations, dams, and slopes."

His theoretical models will be made increasingly accurate over time as their predictions are validated using lab test results and field data. In essence, Kulatilake aims to bring more certainty to what is essentially educated guesswork when it comes to assessing ground stability. "We have been using very simple methodologies in practice to address very complicated problems," he said.

Another part of the problem is that assessing ground stability and preventing ground failure are extremely difficult. Because the number of experts in this area is decreasing, along with funding to train their replacements, a dwindling number remain to conduct these challenging assessments.

Overall, Kulatilake expects his research results to provide a wealth of information related to excavations made for mineral extraction, tunnels for hydropower and transport, dams, foundations, natural and man-made slopes, underground caverns for oil and gas storage and human use, and hazardous waste isolation caverns.